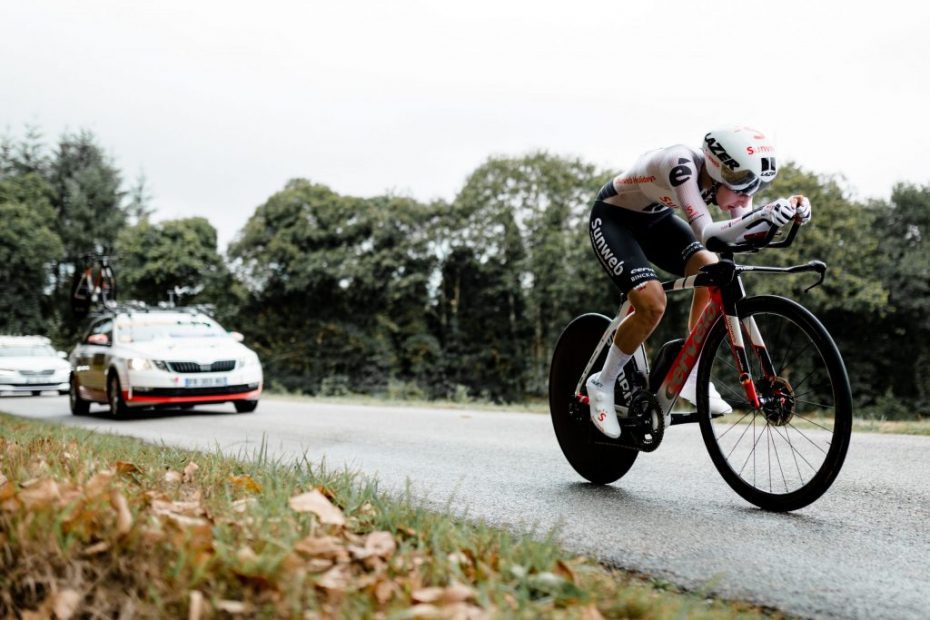 Rolling down the ramp in Locmine, Juliette Labous and her French compatriots were set with a tough and testing 28 kilometre long route through the countryside with several small climbs to contend with throughout the race.

Rain and wind exacerbated the testing course but Labous was undeterred and quickly settled into her rhythm as she left the start house. Passing through the intermediate time check Labous was just 11 seconds down on pre-race favourite Cordon-Ragot. Heading into the second half of the course Labous caught the rider who started one-minute ahead of her, Biannic. The duo would enter a battle on the road as each surged past each other, before Labous eventually got ahead of her compatriot and stayed ahead – with a perfectly paced ride.

Coming into the drag to the line, Labous gave it her all while maintaining her TT tuck, powering across the line, setting the fastest time of the day; finishing the course in 41 minutes and 13 seconds.

A nervous few moments awaited for Labous as Cordon-Ragot was the last rider on the road but much to Labous’ delight, the former winner crossed the line five seconds down, crowning Labous as the elite French TT champion.

“I’m just super happy to take the title, the last few years I was a bit disappointed every time, especially last year when I struggled in the heat. This year I’m just really happy to finally get it. I felt really good today and I just focused on the pacing plan. I didn’t ask for the time at the split because I knew I would focus too much on calculating what needed to be done, so I just kept my head down and gave my all. It was quite hard too because I had to pass a lot of riders, so it wasn’t easy to take the best lines then. I just stayed focused and gave it everything until the finish line. I had to wait a few minutes to know but then people told me I had it; I’m just super happy. I’m also really happy because we worked a lot with the team this year, had a really good material plan and the pacing plan was also on point. So I’m really thankful for the team and the efforts we all put in; it’s really nice for both me and the team.”

“It’s a really well-deserved win. Juliette’s been close to this title a few times in the past few years and now she’s managed to take it. It’s partly a teamwork job too because she had the best materials possible and a really good pacing plan; as was shown by her taking back 15 seconds in the second half of the course. At our team altitude camp in Kühtai, Juliette also had her TT bike with her and had been training with this effort in mind. All in all, I think everything worked out perfectly and Juliette can be proud of this title.”