Home » Kennedy and Brown in the mix at Flèche Wallonne

Kennedy and Brown in the mix at Flèche Wallonne 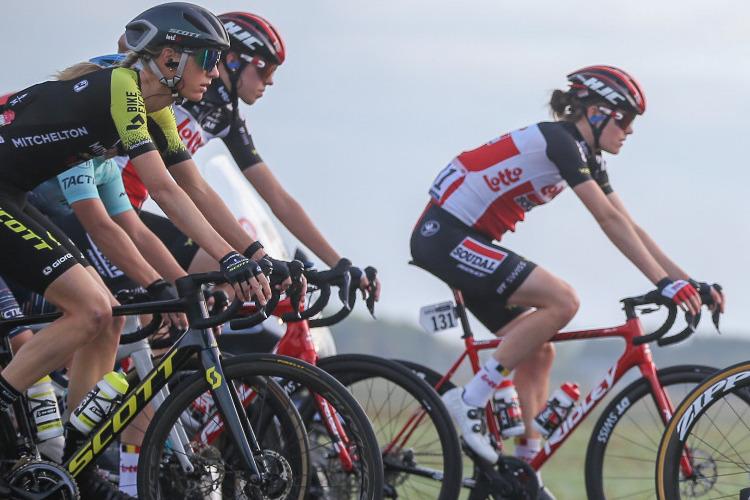 Australian duo Lucy Kennedy and Grace Brown made it into the select group of favourites in the finale of Flèche Wallonne as classic racing returned in Belgium.

The Mitchelton-SCOTT pair fought hard to be in the mix on the approach to the infamous Mur de Huy finish, but the steep slopes proved to be too much in the end and the duo finished just outside the top-10 after a strong ride in wet conditions

After 30km of racing and a number of attempted breakaways, a group of three riders finally managed to edge away from the peloton. The trio soon opened up a maximum gap of 1’40” with little panic in the bunch, with a long way still to go before the race reached the Mur de Huy for the first time.

The attackers were caught ahead of the second climb of the day, the Cote d’Ereffe, and the race settled down again until six-riders jumped away ahead of the first passage of the finish line.

The race then burst to life up the first ascent of the Mur de Huy as riders bridged up to the leading six riders. The peloton were forced to react as a number of dangerous names made it across and the bunch regrouped over the top, with around 40 riders remaining at the front of the race.

Trek-Segafredo took up the pace making as they looked to prevent any attacks before Boels-Dolmas took over at the foot of the Côte du Chemin des Gueuses. The penultimate climb thinned the group even further, but Kennedy and Brown remained tucked away in the wheels inside 10km to go.

The race was then set for a final showdown on the brutally steep slopes of the Mur de Huy and as the fearsome climb approached, Brown moved to the front with Kennedy on her wheel setting a fierce pace. However, the increase in pace on the slopes proved too much for Kennedy with the 32-year-old distanced as the final attacks began.

The Donostia San Sebastian Klasikoa winner eventually rolled across the line in 14th place, one position behind Brown who dug deep after setting up her teammate into the final climb. It was recently crowned world champion Anna van der Breggen (Boels – Dolmans) who took the win, a record sixth straight victory at Flèche Wallonne.

Lucy Kennedy:
“My legs actually felt really good, it’s a bit disappointing that they really just blew as we hit that final climb because Grace did an awesome lead out into it. It’s just one kilometre all out and I just didn’t have it today.

“My legs had been feeling good all day. Up until we hit the circuit for the first climb it was pretty chilled, there was a small break up the road and nothing really happened, so we were just expecting all the action to start when we hit the circuits and it did.

“The group just got smaller and smaller, then it started raining on the first lap, so that made the descents a bit sketchy and as always, positioning was super important. The group was 21 riders I think, so to have two of us there is really good for us, so that’s really positive for Grace and I. Grace was super strong today, as always.”