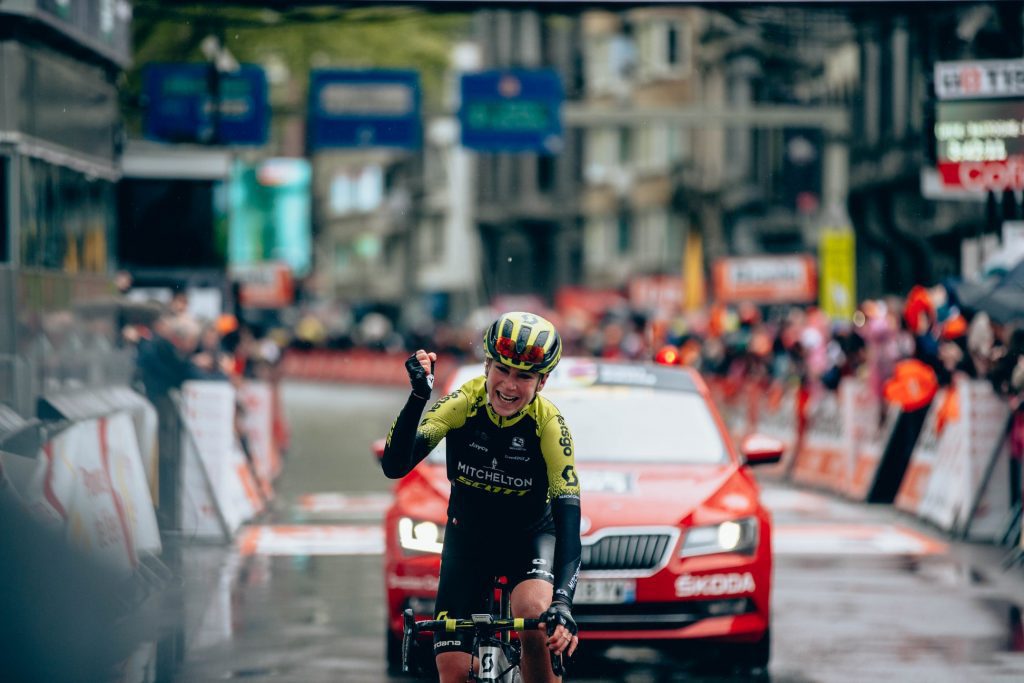 Liege Bastogne Liege Femmes is another relatively new race on the women’s calendar. First held in 2017, it gives riders the chance to cover roads raced by the men’s peloton in one of their monuments. Although the race is called Liege Bastogne Liege still, the women’s race starts in Bastogne and before heading to Liege. The women’s course was subject to the same adjustments as the men’s in recent years. The finish line changing from Ans to the centre of Liege from 2019’s race.

The Queen of the Ardennes, Anna van der Breggen, won the first two editions of Liege Bastogne Liege. In 2017 Anna van der Breggen attacked over the top of the Côte de Saint-Nicolas and won solo. 2018 saw Van der Breggen chase down the solo attack of Amanda Spratt with 5km to go. Then she sped up the final climb to Ans quickest of the pair. Annemiek van Vleuten won the first amended edition in 2019. She attacked on the Côte de la Redoute and won by the comfortable margin of nearly 2 minutes. Lizzie Deignan attacked at the same point in 2020 and Grace Brown set off after her. The pair played a tight game of cat and mouse with the gap tumbling but Brown ran out of race route, finishing just 9 seconds behind Deignan. The pair were over 2 minutes ahead of Ellen Van Dijk in 3rd. In 2021, a small group got away in the Roche aux Faucons. Anna van der Breggen powered the group to the finish line where her teammate Demi Vollering took the sprint. Vollering had been able to just sit on the group at the back and the freshest legs helped out.

The race route changes offer rewards for attacking riders who look to drop others rather than sprint in Liege. So far, the better climbers have managed to drop those with better sprints pretty effectively. The previous route saw many steep, hard climbs late on that punished early attackers and saw advantages quickly dwindle. The battle, once more, will be whether the likes of Van Vleuten can drop riders such as Marianne Vos on the climbs.

Both the Côte de la Redoute and the Roche aux Faucons provide long steep ramps on which to attack and get gaps. Côte de la Redoute is 1.6km at 9.5% (max. 17.5%) and Roche aux Faucons is 4.5km at 4.1% in full. The latter climb could be considered as a pair of climbs joined up with a short downhill. The max gradient is close to 15% on the first section. 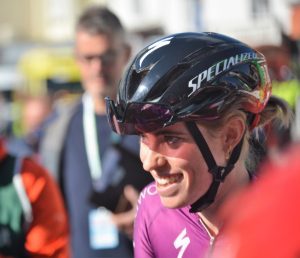 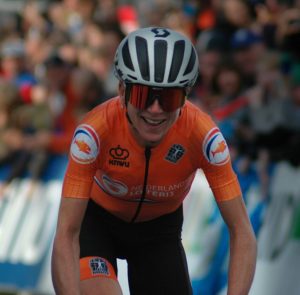 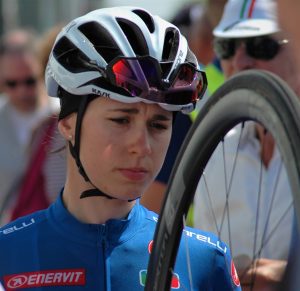 FDJ’s Marta Cavalli is the form rider of the moment. We saw a peak from Elisa Balsamo and Lotte Kopecky earlier in the sprint it seems Cavalli has timed her peak perfectly coming into the Ardennes classics. I didn’t particularly rate her chances on the Mur de Huy after only finishing 17th there before but she blew that out of the water! With that in mind, Cavalli’s best Liège-Bastogne-Liège Femmes is 14th, last season. It feels nailed on that Marta improves on that this year. Teammate Cecilie Uttrup Ludwig is on the early start list but is recovering from a Covid positive. With that in mind and Marta Cavalli in such great form, if she races then she should be there in a support role this year. As always, the wildcards for the team come from Australia.
Grace Brown nearly won this race 2 years ago, closing down Deignan at a rate of knots but running out of road. If FDJ wants to send someone up the road, Brown is a willing volunteer. Brodie Chapman continues to impress this spring classics season. She put in a huge turn to close down the gap to a large break at Fleche Wallonne and delivered Marta Cavalli into the bottom of the Mur perfectly.

Annemiek van Vleuten won the first adapted edition of Liège-Bastogne-Liège Femmes in 2019, with the finish in Liège rather than Ans. That day, Van Vleuten won with a solo break that had almost 2 minutes at the finish line. She came close to repeating that with a 2nd place in last year’s race, out-sprinted by the fresher Demi Vollering in a small group finish. Despite some claims to the contrary, she’s had a good spring so far with a win and a trio of 2nd place finishes at major classics. It’s not beyond the realms to see a repeat of Omloop het Nieuwsblad. Van Vleuten gets a gap after Roche aux Faucons, SD Worx sit on and it comes down to a long sprint where a victory is possible.

SD Worx has a pair of stars with a good history at this race. Demi Vollering is last year’s winner and had a podium back in 2019 whilst still at Parkhotel Valkenburg. I had her pegged to win Fleche Wallonne on Wednesday but she was a little bit off the lead pair of Van Vleuten and Cavalli. With a bit of team support, I can see her being able to close any gaps after the Roche aux Faucons at Liège-Bastogne-Liège Femmes. Then she can use her sprint to beat most of the other contenders. Teammate Ashleigh Moolman-Pasio has 3 top-10 finishes across both of the parcours layouts here. 7th last season whilst sitting on the chase group of Marianne Vos and Cecilie Uttrup Ludwig meant she played the team role. I’m thinking it’ll be the same this year but hopefully working at the front for Vollering.

After the impressive win at Paris Roubaix, I figured that would dull the legs a bit and prevent Elisa Longo Borghini from doing particularly well at Fleche Wallonne. She still finished 6th despite the limited recovery time and there’s no doubt the cobbles would still have been in her legs whilst racing up the Mur de Huy. Liège-Bastogne-Liège Femmes could be a race for her but to win she would need to attack and go clear as teammate Lizzie Deignan did in 2020. 3rd here last season shows she can be in the reckoning. It’s also a race that Ellen van Dijk and Lucinda Brand can do well in for Trek Segafredo. Van Dijk was 3rd in 2020, winning the group sprint behind Deignan and Brown out front. She was also 4th and 5th on the old final uphill stretch into Ans. 7th at Paris Roubaix, it’d be nice to see her get a chance. Brand was 5th in 2019 and 9th here last season and clearly has form going into this year’s race after 3rd at Paris Roubaix Femmes. The battle is going to be on the climbs for both riders as they may need to claw back any gaps.

It’s a bit of an understatement to say that Canyon SRAM went missing at the crucial moment in Fleche Wallonne. We saw Alena Amialiusik and Elise Chabbey in the big breakaway and then Kasia Niewiadoma attacked on the Côte de Chreva, only for no rider to make the top-10 results. That leaves all sorts of questions about the form of Niewiadoma who should be a favourite here. 4th in last year’s race, the issue will always be having to sprint against others whilst always being a marked rider on the climbs. Teammates Amialiusik and Soraya Paladin both have top-10s at Liège-Bastogne-Liège Femmes and will prove useful foils. The team continues to look for a first win since last July.

There’s a bit of an asterisk with Marianne Vos at the moment after her Covid positive. She’s once again on the early start list but we’ll see if she’s actually able to race closer to the weekend. 4th in 2020 and 6th in 2021, other riders have managed to ensure that Vos has been dropped from the front group before the sprint finish. The battle for Vos will always be against the purer climbers who will be wary of what she can do with the finish line in sight.

UAE Team ADQ’s Mavi Garcia maybe lacks the punch required for some of these climbs but the pure climber can never be counted out. She’s squeaked into the top-20 a couple of times before at Liège-Bastogne-Liège Femmes and has a chance for the top-10 this year. She’s in good form, 5th at Fleche Wallonne and 6th at Amstel Gold Race shows she should be in the mix.

Amanda Spratt was 2nd on the old parcours, the uphill finish suiting her a little bit more. She’s been 10th and 11th on the flatter finish in recent years. The results are on an upward trend and it feels like only a matter of time until we see her properly at the front end of races again. 24th and 25th in recent races are her best finishes of the year and I think by the time of the Spanish climbing races in May, she should be almost back to 100%.

I thought Team DSM might have been going for Juliette Labous at Fleche Wallonne but she got dropped disappointing early and was a DNF. With that in mind, expectations for Labous may have to be tempered here. She was 8th in 2020 so a fully fit Labous would be a contender. With that in mind, Liane Lippert looks the most in-form rider on the team. After a pair of podiums at Amstel Gold and Brabantse Pijl, Lippert was 7th at Fleche Wallonne. Attempting to go with Van Vleuten’s early move on the Mur de Huy, she fell backwards slightly and nearly got ridden into by Demi Vollering. In this form, she can make it over the Roche aux Faucons in the front group. Floortje Mackaij was 2nd here in 2019 and is a great rider to have in support. She got her highest profile result of the season at Paris Roubaix with 6th place. With a week of recovery, we should expect to see her play a role at Liège-Bastogne-Liège Femmes.

Yara Kastelijn finally cracked the top-10 at Fleche Wallonne with 9th place. After getting into the big break, she held on as the favourites group caught up and still had enough left to get a great result herself. We often see her trying to close down moves on her own whilst other riders still have teams around to do the work. Avoiding doing some of that extra work may allow her to finish even higher in future races. I think she may not finish in the front group here but should be a contender from the second group on the road.

Liv Racing Xstra’s Katia Ragusa set the ball rolling with the first attack at Fleche Wallonne. She held on for a long time, only getting distanced on the 2nd ascent of the Mur de Huy as the next break overtook the original one. She was climbing well and I half expect to see her in the break again at Liège-Bastogne-Liège Femmes.

Silvia Zanardi joined Ragusa in the original group and made sure to crest almost every climb in 1st place to earn the €250 bonus each time. She certainly climbed well and again only fell back once the counter-attack break came through. She’s a punchy climber and there’s an outside chance for her to make it over the 2 late climbs and have a sprint for the top-20.

Mischa Bredewold has consistently been near the front of races this season, making attacks and sometimes going clear. Her best result has been 14th at Brabantse Pijl and she’s generally flirting with the top-20 at WWT level races. She’s a rider you can expect to see attacking off the front at some point with an outside chance of making it into one of the front groups at this race.

Le Col-Wahoo’s Lizzie Holden has impressed with her attacking and strong finishes. 18th at Amstel Gold Race and 21st at the Tour of Flanders were career results at WWT level. It’ll be interesting to see how she fares in this form on the longer climbs at Liège-Bastogne-Liège Femmes. She’s potentially the team’s best shout for a good result.