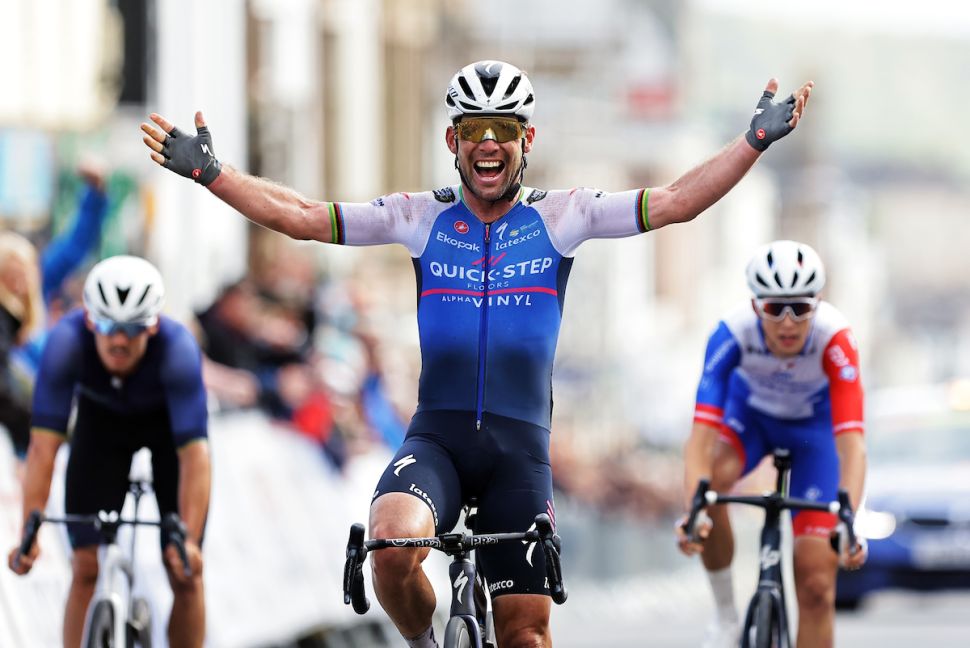 One of the biggest dramas heading into this year’s Tour de France was whether Quick-Step Alpha Vinyl would take Mark Cavendish to overtake Eddie Merckx’s stage win record. All despite Patrick Lefevere’s consistent statements that Fabio Jakobsen would be the team’s sprinter. Cavendish was named in the reserves and a late withdrawal saw the other named reserve, Florian Senechal called up instead.

The romanticism of Cavendish getting another Tour de France to build on his successful one in 2021 meant the rumour wouldn’t die. When Cavendish won the British national championship from the break a week or so before the Tour de France, British fans thought they may change the mind of the steadfast team manager.

It wasn’t to be and Fabio Jakobsen went on to win a sprint stage in Denmark, so the selection is largely vindicated in a Tour de France that hasn’t offered up many opportunities for sprinters to shine.

During the Tour, Patrick Lefevere confirmed that Cavendish won’t be a Quick-Step Alpha Vinyl rider in 2023.

With transfer announcement season starting from August 1st that kicked the rumour mill into overdrive. Will Cavendish retire? Which team will he end up on next? Will he ever get to do another Tour de France and take that record outright?

Mark Cavendish himself says that he has no plans to retire, despite thinking he may do during a tearful end to the 2020’s Gent Wevelgem. The 4 wins at the Tour de France last year rather changed his mind on that front.

“I know I’ll win again, the only thing I regret is that I know I was in the form to win there (at the Tour de France).

I’m in my best form for easily a decade. When you think that’s gone to waste a bit, that can be hard.

I don’t see myself retiring, I think as long as I know I’ll win then I’ll carry on my career.”

Mark Cavendish, as told to the BBC

Which team will Mark Cavendish ride for in 2023?

So far all we have are rumours with none of them being a neat fit.

The most popular at the moment is a move to EF Education First. This was sparked by Mark Cavendish attending a Rapha x Palace event, both brands linked to the EF Education First and their special Tour de France kit this year. Jonathan Vaughters himself has said it feels unlikely, due to the sprint train elements that the team would also have to sign to give Cavendish the best chance to win. EF Education First hasn’t really had a top-drawer sprinter for 10 years now either. You have to go as far back as Tyler Farrar and Thor Hushovd when the team was Garmin-Cervélo.

B&B Hotels is rumoured to be signing Carrefour as a sponsor and having a load more budget available. Cavendish is probably the best available sprinter and with the record on the line will help B&B Hotels secure a wildcard spot for next year’s Tour de France. They’re under pressure from the Norwegian Uno-X team who have been vocal about the attacking racing they would do if they were invited.

Bora Hansgrohe are another mentioned option due to their use of Specialized bikes, a favourite of Cavendish’s. They already have Sam Bennett, although it’s not been the greatest of seasons for the Irish rider. It feels unlikely other than the bike links.

The Ineos Grenadiers is another potential homecoming for Cavendish. They’ve had Elia Viviani as their main sprinter and he’s underwhelmed ever since joining Cofidis 3 years ago, unfortunately. It would be a welcome return and maybe a farewell Tour amongst riders he has been friends with for years. What works against this is that Ineos rarely split from their GC goals, Cavendish in 2012 was a rare exception, and so it feels unlikely.

Intermarche Wanty Gobert is another potential home. With Alexander Kristoff all but confirmed as moving to Uno-X, that leaves a space for a sprinter. There is competition there in the form of Biniam Girmay, who the team has signed to a long contract and also Danny van Poppel who has been racing this year’s Tour de France. At the moment, other than B&B splashing the cash to get their man, this feels like the best potential spot for Mark Cavendish.