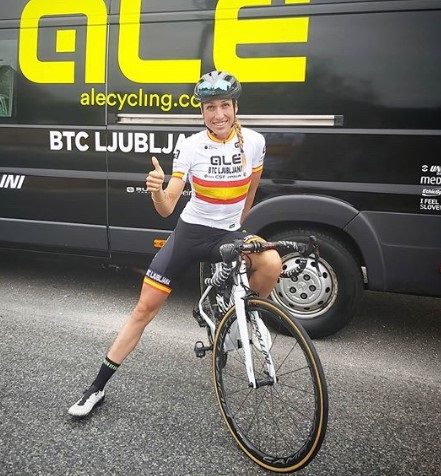 ​Today saw the conclusion of the Tour de l’Ardeche, a French stage race in which the girls of the Alé BTC Ljubljana team have been protagonists. Spanish champion Mavi Garcia finished second in the final classification of the race, 38 seconds behind the winner, the American Lauren Stephens (Team TIBCO – SVB). The Iberian athlete had given two good victories to the general manager Alessia Piccolo’s team conquering the first and second stage and wearing the leader’s jersey for several days.

Tenth place in the final classification for the Slovenian Urska Zigart. Tenth stage today in Beauchastel, the other Slovenian Urska Bravec. The last stage, today, was won in a sprint by Chloe Hosking (Rally Cycling Women). Alé BTC Ljubljana was also crowned today as the best team in the race.

Sports director Fortunato Lacquaniti: “Two victories, excellent performances can only make us satisfied with what we have been able to do in recent days in France. We have shown that we are in good condition. All the girls behaved very well”.

Giuseppe Lanzoni was in charge of the team in France and he adds: “It’s a bit sad to have lost the ranking for the wind, but it’s still a great result. The team ran very well all the stages. The girls certainly learned to work together and each of them was able to do their job. Now we think about the Giro with great confidence”.

From Friday 11 September the Giro Rosa will start, tomorrow the team will be unveiled.