Mikayla Harvey had a breakout performance at the Giro Rosa this year, so we sat down with the young New Zealander to ask her more about her preparation for the event, her experience performing on the world’s biggest stage, and what’s next for her after her impressive Giro ride.

How did you prepare for the season recommencement and the Giro Rosa specifically?

I’d have to say that my preparation was near perfect, what I did this time around really seemed to work! During the lockdown, I went back to New Zealand, which I think was really beneficial. It was such a stressful time for everyone, and mentally it was good to be back with my family, which made the entire time a lot easier.

I went back to basics, and I found that it was a good time to work on my weaknesses, so I spent time in the gym working on my power. One interesting thing is that I started to do mountain biking a lot of more, around two to three times per week, which really helped me to feel more comfortable on gravel roads, and I think that was of great help in races like Strade Bianche and the gravel stage of this year’s Giro. At that point, I wasn’t exactly sure what form the re-started season would take, but this type of varied training has proved to be just what I needed.

Then, when I returned to Europe, I was so motivated, because I missed the racing environment so much. I was lucky enough to be able to attend two training blocks in Andermatt Swiss Alps, where I spent time riding in the mountains, which I absolutely loved. It was just the right atmosphere, staying in a beautiful apartment, dining on delicious food, and having our soigneurs to provide post-race recovery every day. It’s the little details like that, which are all part of a professional environment, that really gave us those extra gains in our performance.

You mentioned last week that you had to learn – very quickly – about how to master the art of riding in echelons on Stage 8. Tell us a little more about what happened that day.

On the penultimate stage, we were faced with massive side winds, it was incredible. I’ve raced in echelons before, but I haven’t always been the most successful at navigating them. But because of my fifth place in GC and the white jersey, I had to survive on the stage and learn how to ride in the echelons. My teammates helped me so much and I was able to get into the proper formation and made it into the first group. It was a steep learning curve, but I managed to get it right, and now I have a much better understanding of how to thrive in conditions like that. It was intense, and the racing was so aggressive, but we pulled through together. 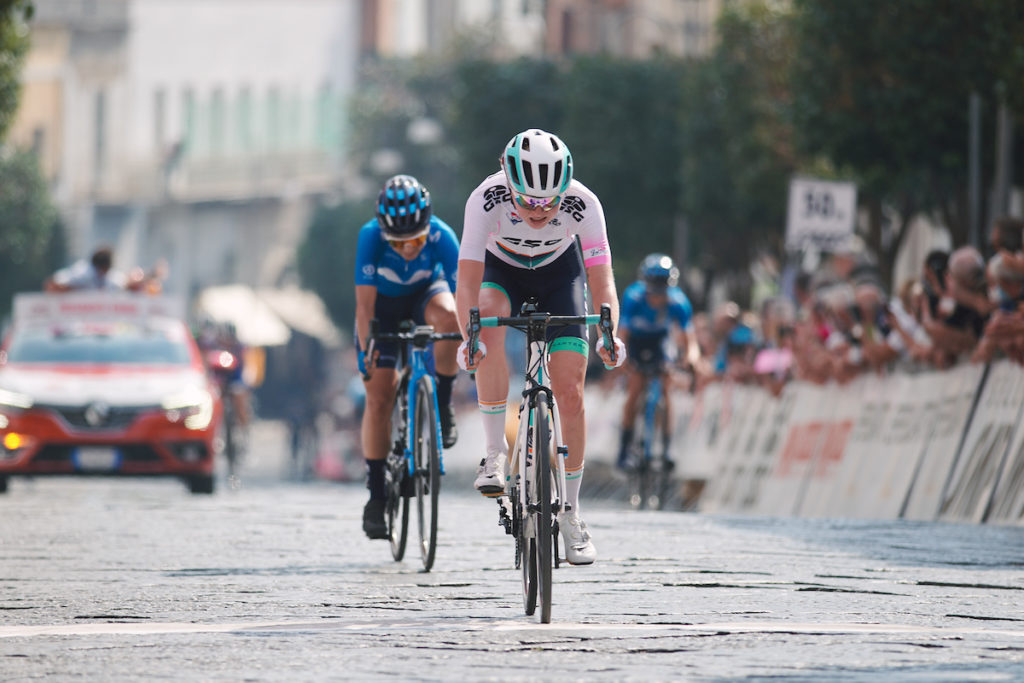 What was it like to then go on to take a podium place on that stage?

I think it was one of my best performances on the bike, particularly considering what happened in the lead-up to the finale. It was my first time thriving in echelons, and then I had an ill-timed mechanical, had to drop back, and was brought back with the help of my teammates. They put so much effort into helping me through all of those unlucky situations, and so I was so motivated when we hit the bottom of the crucial climb. Lizzy put me in a perfect position heading up to the ascent, and from there, I just rode my heart out and gave it my all. I eventually made it into a select group with Anna van der Breggen and Elisa Longo Borghini, and when they started attacking, I rode so hard and went into the red, but I was so determined to do my best. When I crossed the finish line in third place, there were so many emotions that all came at once. It felt incredible to finish on the podium with riders of their calibre, some of the best climbers in the world. I was in tears after the stage, I couldn’t believe what I had accomplished that day. 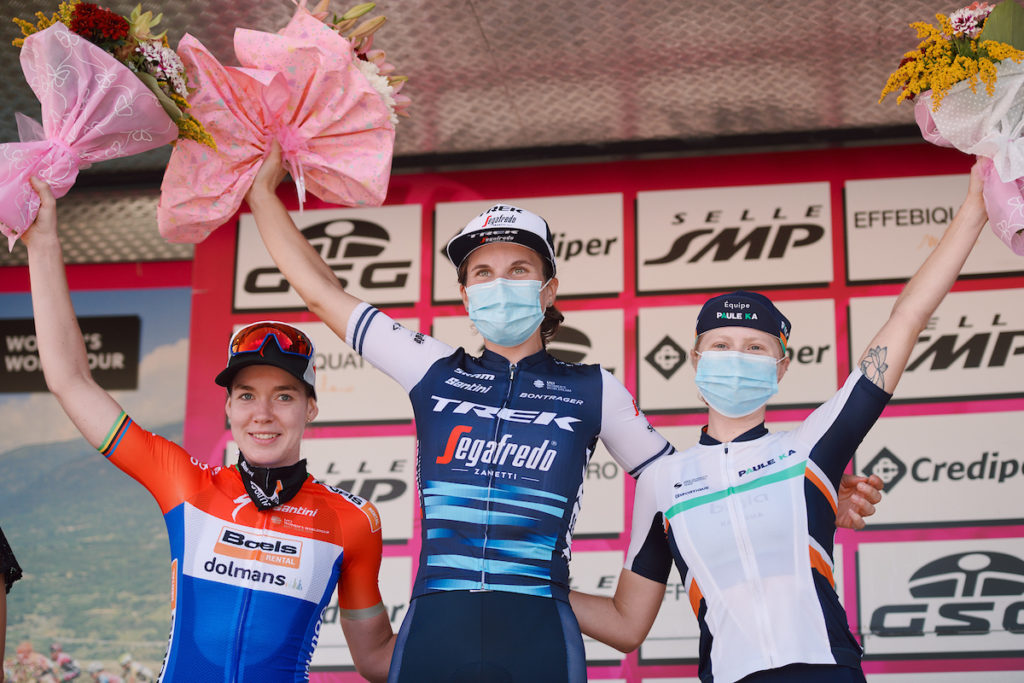 What were your expectations in terms of the young rider’s jersey? Did you imagine you could win it by such a large margin in the end?

The white jersey was always a big goal of mine heading into the race. The team gave me the green light to go for it, and they supported me the whole way in pursuit of it. I had raced well at races such as Strade Bianche and La Course, so I had proved that I was able to fight for the young rider’s classification. It was a really exciting opportunity, with it being the first time I had such a defined leadership role. I have to admit that I was slightly nervous because of this, but the belief that my team had in me was what spurred me on, and it was amazing to pull off this goal of ours in the end. 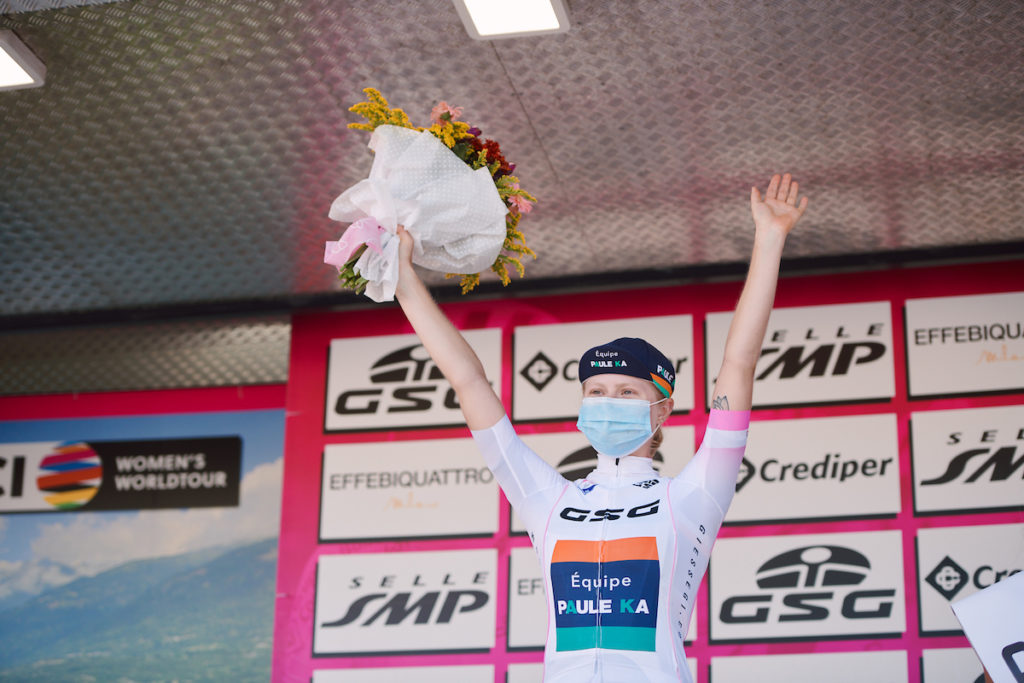 With your Giro performance in mind, what are your goals for the near future? Has this changed how you perceive yourself as a rider? Will you become more ambitious in your next races?

It’s always been a goal of mine to be able to compete with the cream of the crop. However, I wasn’t expecting that to happen this year, so that was a pleasant surprise. However, I’ve been training very hard, and I’ve definitely noticed a gradual improvement, I have more consistency, and mentally I’m stronger than ever before. I think I’ve also gained a lot more racing maturity and now understand the crucial importance of recovery as well. These have all played a role in my improved performance at the Giro, and my ability to mix it up against the best riders there. If I can continue like this, I’m definitely going to gain so much confidence, and I’m already looking forward to seeing what I can do in my next races this season and also next year. 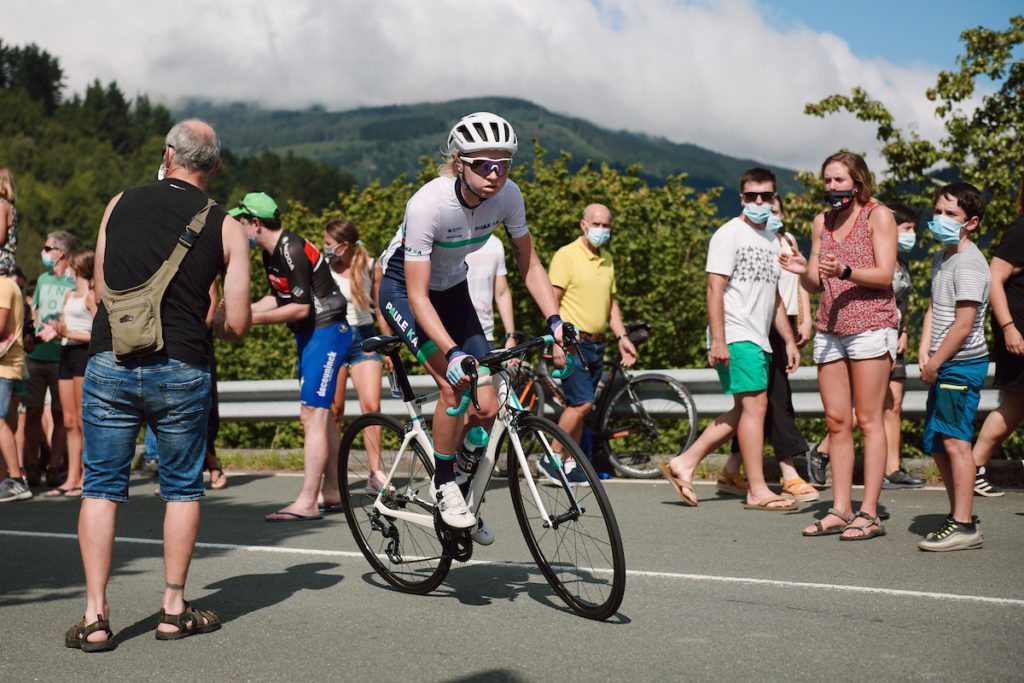 Any concluding remarks on the team’s impressive performance last week?

The team as a whole was such a cohesive unit, all of the staff and riders were so supportive and dedicated to our common goals, and that made for such a comfortable environment in which to race. It made the racing enjoyable to know that everyone has each other’s backs. It just motivated us to battle it out further and to push ourselves that little bit more on the road. It was definitely a special experience. 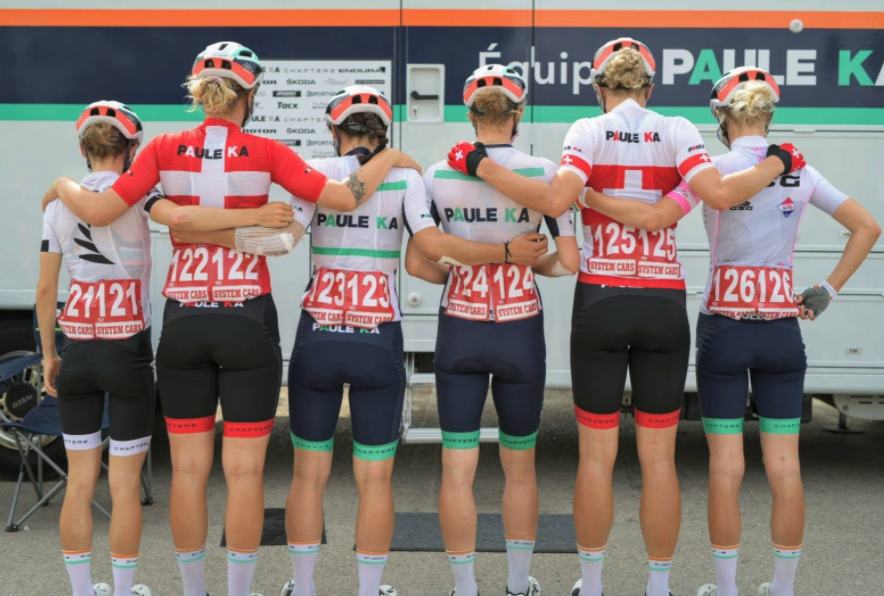 Your next goal is the World Championships. What do you hope to achieve there?

My first race will be the time trial, and my expectations there are pretty open. There’s not so much time between the end of the Giro and the race, but I’ve returned home for a few days in between to re-set, so hopefully that will aid a bit in recovery. This season, I’ve been focusing more on the road than the race against the clock. However, having said that, time trialling has always been one of my strengths. So I want to go out there and do my best and see what I can pull out. In terms of the road race, I love the course, the profile suits me relatively well, with its punchy climbs, and I’m excited about getting a closer look at the parcours very soon. I think I can do well there, so let’s keep our fingers crossed! 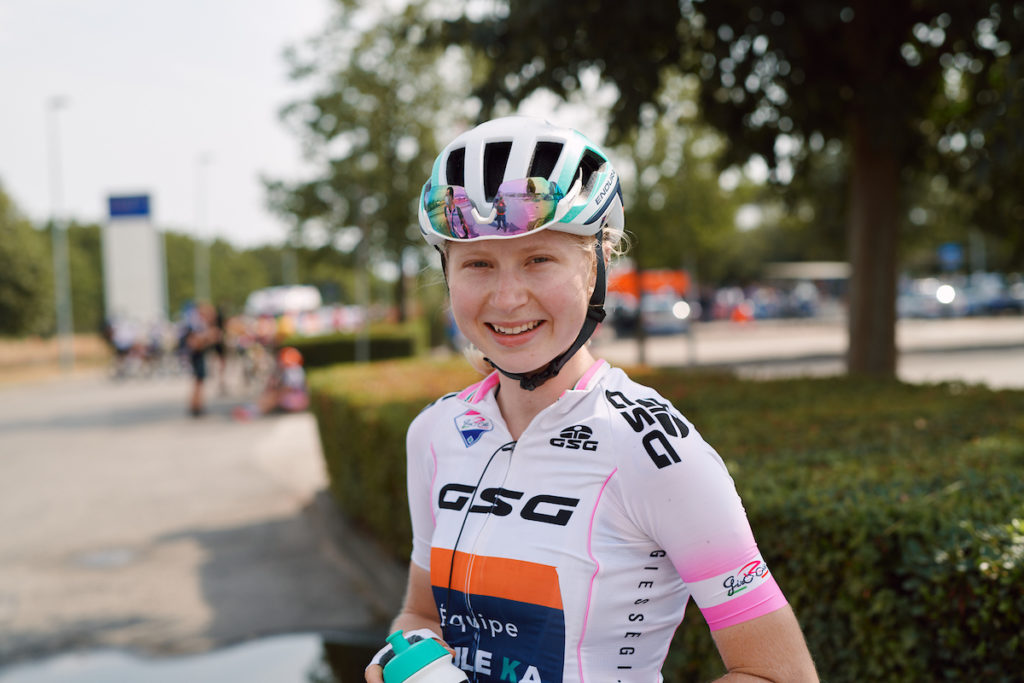