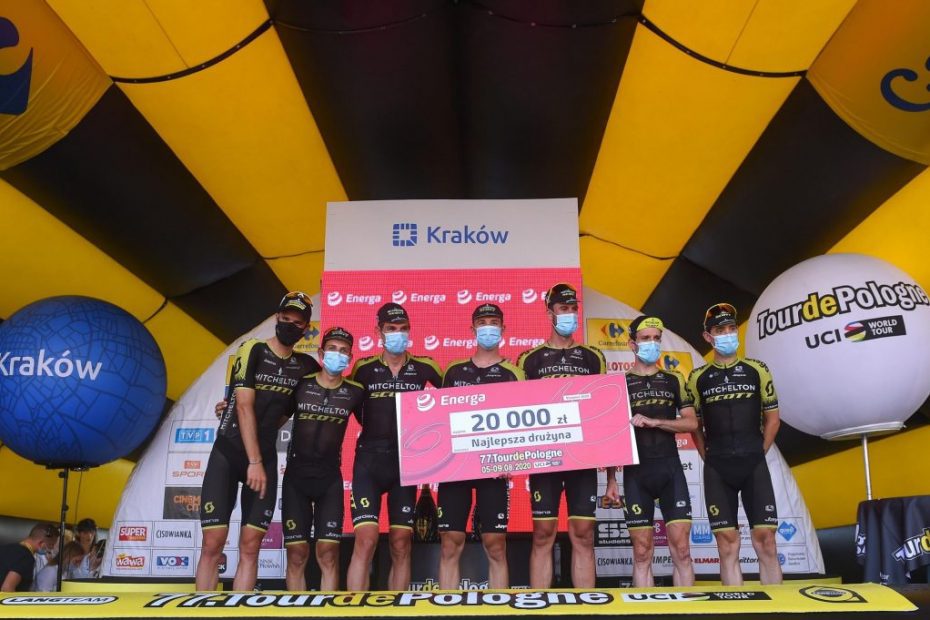 Mitchelton-SCOTT wrapped up the Tour of Poland today with multiple trips to the podium as British climber Simon Yates secured third place overall, Luka Mezgec claimed the sprint classification and the Australian outfit came out on top in the overall team classification, after a promising performance in their first WorldTour stage race of the 2020 season restart.

With the general classification decided yesterday on the Queen stage, where Yates climbed to third place behind the eventual Tour of Poland overall winner Remco Evenepoel (Deceuninck – Quick Step), today was a day for the sprinters in Krakow. Mezgec finished outside the top-10 in the hectic sprint with Davide Ballerini (Deceuninck – Quick Step) taking the stage honours to add to Deceuninck-QuickStep’s wins.

Five force a move:
The 188km day was animated by a group of five riders that attacked away from the bunch in the early kilometres and quickly established a lead of five-minutes, as they headed up and over the first two classified climbs of the stage.

As the race passed the half-way mark, the pace in the peloton lifted slightly with Deceuninck-QuickStep leading the chase, which saw the gap to the five-leaders significantly reduce down to just one and a half minutes.

Final sprint battle
The sprint teams came to the fore as the peloton entered the final three finishing circuits around Krakow centre with Barnabas Peak then Daryl Impey and Sam Bewley doing all they could to assist Mezgec into a good position to try for the final sprint.

On the wide roads the sprint opened up and Mezgec found himself a little too far back as the sprint was contested in front, eventually finishing the day in 16th place, but rewarded by an overall win in the sprint classification and with teammate Yates making it onto the overall podium.

Luka Mezgec:
“I am happy with my shape this week, I was almost one month at altitude, I felt that was good work and I was climbing good. The day I was sixth on the uphill sprint I showed I was still there with climbers.

“I am quite disappointed with today’s sprint actually. I had to break a lot in the last one and a half kilometres, so I totally lost positions, today I didn’t have the flow towards the final.

“The overall sprinter’s jersey just shows that I was overall up there many days, but I would have preferred a better sprint result on one of the days and I just hope for the races in the future I can go a bit closer to the victory in the sprint. Overall we were really good this week as a team.”

Simon Yates:
“I think we came into the race as a team looking to get onto the podium so we accomplished that. On a personal level I was feeling better every day so looking forward to what is coming up this season.”

Mathew Hayman – Sport Director:
“We came in looking for a stage win and a podium on GC so we ticked one of those boxes, but it was nice to be active in every stage and chasing something every day.

“Simon took his opportunity and showed some good form to finish on the podium but equally the other two guys, Mikel Nieve and Esteban Chaves, where moving well as well.

“We came into the race with three good climbers and we wanted to play those cards in the two harder stages, the first hardest stage still came down to a sprint and we still had Mezgec there. It is a shame he didn’t get a really good result this week to show how well he is going.”