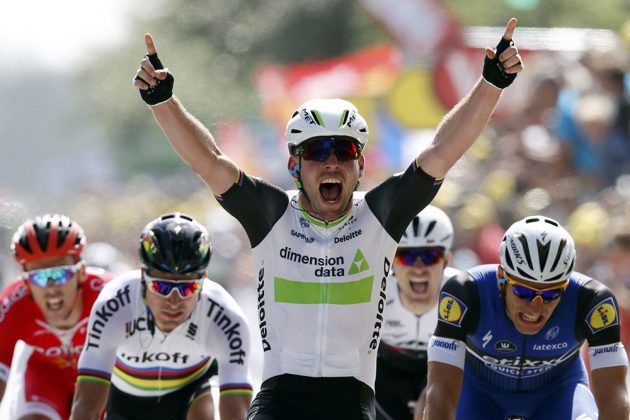 Mark Cavendish is back! 2nd only to Merckx in terms of stage wins and 1st when you take out time trials, Cavendish is statistically the best sprinter in the Tour de France ever. His last stage victory came back in 2016 and it’s been a hard road back to form for the British rider. He needs 4 stages to catch Eddy Merckx which feels ambitious, it could be his last chance.

The king of the green jersey was dethroned in 2020 for the first time since a controversial disqualification in 2017. Sagan has won the green jersey 7 times, including 5 straight from 2012 to 2016. Despite reports that he’d lost a yard of pace compared to his rivals, Peter Sagan continues to win races. He took the points jersey at the Giro d’Italia this season and will want to repeat that at the Tour de France.

Ewan is a tough sprinter to rely on. At times he appears to be the world’s best but then will suddenly go missing in action. He took 2 Giro d’Italia stages earlier in the year before controversially (to some) leaving the race. Caleb Ewan won 2 stages in 2020’s Tour de France but would dearly like to win in Paris again like he did in 2019’s race.

Free Wout! It feels like Van Aert has a great shout to stroll to victory in the green jersey competition. However, he’s been press-ganging into service for Primoz Roglic’s GC ambitions at the Tour de France. The cyclocross world champion took his first Tour de France in 2019, beating the likes of Viviani, Ewan and Sagan in a straight sprint. He got let off the leash to perform a similar job in Stage 5 last season before taking advantage of the absence of sprint specialists to win the lumpy Stage 7. We’ll certainly see brief flashes of what Van Aert can do.

Demare is some people’s top tip for the green jersey in this year’s Tour de France. He’s been more successful in the Giro d’Italia previously, with 5 stages in the last two years thereafter eschewing the Tour since 2018. The 2020 Giro d’Italia points jersey winner has been in good form in 2021, taking 8 victories and will take on Sagan in the battle for green. Demare won 3 stages at Boucles de la Mayenne, which also saw him win the GC and points jersey.

There’s a bit of a battle for sprint supremacy on the Alpecin-Fenix team. Merlier has been successful with 6 wins this season, although they’re largely in tough Belgian one-day races rather than stage races. He’s got the small matter of Mathieu van der Poel on his team who will want opportunities and also Jasper Philipsen will be knocking on the door too. In an ideal world all 3 would combine into an amazing lead-out train but that feels unlikely.

Colbrelli is being seen as a great shout for the green jersey in this year’s Tour de France despite not taking a stage victory in 4 previous editions. His impressive form at the Tour de Romandie and Criterium du Dauphine saw Colbrelli take the points jerseys at both races and a stage victory in each race. His consistency is what people have noted though, with 4 more second places. That used to be the preserve of Peter Sagan at his peak at the Tour, where numerous 2nd places would set up a tilt at the green jersey in Paris.

The former World Champion is coming into his own as a similar but better version of Tim Merlier. After winning Gent Wevelgem last season he followed that up by winning Kuurne Brussels Kuurne at the start of 2021. That run of form continued with podiums of 2 stages at Paris Nice and then 2nd at the Bredene Koksijde Classic. Pedersen is a better shout on tough days for the sprinters rather than the flat, drill to the line.

Bryan Coquard is a bit of a budget Peter Sagan. He does a great job in the Coupe de France races but has never taken a grand tour stage victory. His best run was in 2016 where he hardly seemed to be out of the top-10 in the first week and looked to be giving Sagan a run for his money. A switch of teams meant he wasn’t seen at the tour de France until 2020. He returned to his old ways with 6 top-10 finishes.

It’s somewhat surprising that Nacer Bouhanni has never won a Tour de France stage. He’s taken 3 stages each at the Giro and Vuelta but circumstances have intervened at the Tour. Bouhanni famously missed the 2016 Tour de France after getting into a hotel altercation that needed an operation. His last Tour was in 2017 as Cofidis favoured other riders. Bouhanni also got into trouble in 2021, getting suspended for 2 months after sticking Jake Stewart in the barriers back in March. He’s only just returned to racing and was 5th behind Cavendish and Merlier in the Belgium Tour.