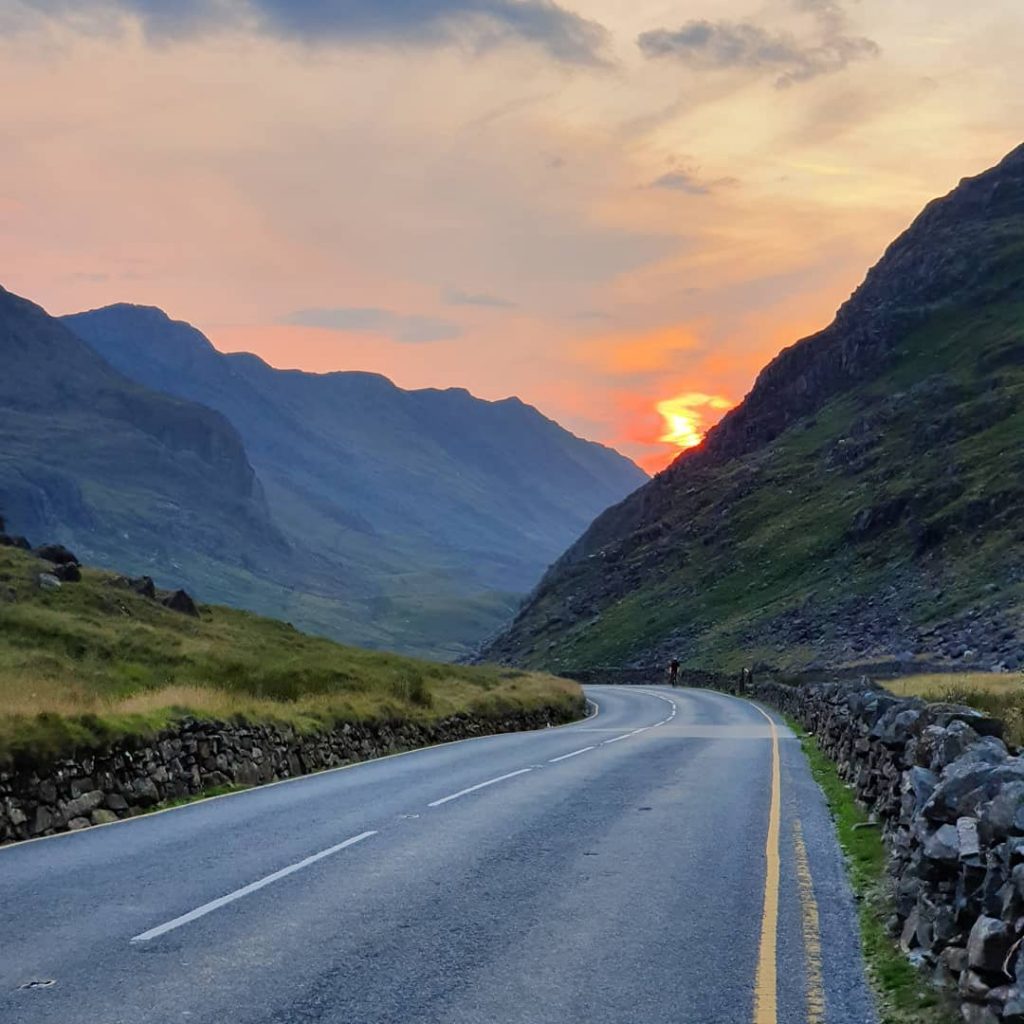 There are a tonne of cycling climbs in North Wales and Snowdonia. I went to uni up there in Bangor and absolutely love the area. Exploring it by bike gives you a chance to soak up the views going up or down some of the mountain passes. I’ve written about some experiences in the area before as well. I’ve got my favourites, some are tough, some are easier but all of them offer something special.

First off, a classic. Pen-y-Pass is the climb out of Llanberis on the A4086 up to the Pen-y-Pass lodge where several walking routes to the summit of Snowdon start from. The lodge helpfully is a decent cafe stop too as it happens.

The climb is a reasonably long one at 2.4 miles. There’s some lumps coming out of Llanberis but the climbing doesn’t really start until you’re through the village of Nant Peris. The climb from this point averages 6% to the top with a maximum grade of 10.2%. Early on, the grade sits at around 3-4%, a nice early warm-up for what’s about to come.

There’s a little dig just before the 1-mile mark but then it returns to an easy 2%. You’re now entering the 2nd part of the climb where it sits bang on that 6% average for the next mile. You come round a bend over a river stream and you can just about see the lodge up ahead. You can also see all of the road that you’ve got ahead of you.

The final section sees you battling 9-10% until the summit. It starts when the road refuses to stay in a straight line. Not exactly S-bends but there’s a definitely wiggle back and forth. Give it a final blast up to the youth hostel and you’re done!

The Tour of Britain descended the Llanberis Pass in 2013 and climbed up the same pass in 2015’s race.

The Marchlyn Mawr climb in itself is a stiff climb up to a reservoir with awesome views. This version tacks on the Fachwen climb to the start of it and has 3 distinct sections.

The first section starts going over the bridge over the Afon Rhythallt, just off the A4244 west of Llanberis. A nice flat bit by the lake to start, the first ramp takes you up through the woods at about 10%. You get to rest through the scattered houses before hitting the tough end part. A long 10% grade winds up to 25% right at the junction in Dinorwig. Make sure you’ve come with sensible gearing!

There’s now a flat part after turning right but make sure to change down for the next left turn as there’s a short dig before it flattens out for your mid-climb breather. Good things come to an end though, take the next right for a solid ramp up to the gate. I put the bike on my shoulder and walk through the kissing gate with it.

Here’s where the Marchlyn Mawr climb starts. A slow wind-up at around 7% turns the wick up to 12% as you approach the junction. Keep going straight through! The right turn is another climb you can do though. You start your way up to the lazy long hairpins which will take you to the top. If you’re with people, you can see them going back and forth ahead of you at this point.

The endpoint is pretty clear, the road runs out and there’s a big gate in front of the tunnel into the mountain. You can now see the Marchlyn Mawr reservoir and the awesome views out across all of Snowdonia and Anglesey.

Nant Gwynant is a lovely long climb that is never steep for too long and gives amazing vistas of the heart of Snowdonia. Heading north out of Beddgelert the road takes you up to Pen-y-Pass from the reverse side (with a left turn at the Roman Camp junction). You get to ride past the long lake at the bottom which gives the climb its name.

The early stages are just a tiny fraction of a gradient and are tree-covered. A couple of steeper ramps followed by sections where the gradient backs off again helps you get some elevation. Once the trees start thinning out, it’s worth a look over your left shoulder to see the lake in all its glory on the valley floor. There’s even a perfectly placed lay-by if you want to stop and snap a photo. The steepest ramp is around 1.5 miles in but once done with, everything else is easier.

Eventually, you pop out and start hitting the unofficial Snowdon walking parking area. On a decent summer’s day, this could get quite busy with slow-moving cars all looking for a spot to park. At this point, the climb flattens out and gives you some rest before the left turn up to Pen-y-Pass.

The first part should take off the speed you carried through the corner but then flattens out nicely. As you start approaching the right-hander with only the stone wall on the outside separating you from the abyss below, it gets steeper again. You can see the lodge though as soon as you make the corner which helps give you a target to full-gas it to the finish.

The Nantlle climb takes you up the pass to see the Nantlle ridge. Taking the B4418 out of Penygroes towards Talysarn you progress slowly up the valley until the proper climb appears. There’s an early rise past a farm to really warm up those legs. It’s a short steep affair to kill your speed but eases off again afterwards. You can see the rocky outcrop slice ahead of you too, that’s where the road winds itself to the top.

Take it easy on the flat and take in the views of the rocky ridges up above you on both sides now. An easy left-hander signals the start of the climb proper with a near double-digit gradient ramp up through the right-hand bend coming up. Once again you get a rest as the climb flattens itself out for a bit.

Make sure you’ve not maxed yourself out before the final blast to the summit. The climb reaches its steepest point just after the next corner but the end is just there. There’s now a fun descent to Rhydd-Ddu with postcard views of the lake and valley down to Beddgelert. If you follow the road to Beddgelert, you can do another of the cycling climbs in North Wales by going up Nant Gwynant.

There are two approaches to the Sychnant Pass, the one I like is on the Conway Old Road out of Penmaenmawr as I usually approach it from the west. There’s a little pre-ramp not on the above profile but you can take the downhill from it to the start of the climb in the village of Capelulo.

A swing to the left where the cafes and restaurants are is the start of the climb and where the yellow/orange segments start in the above image. You very quickly pass the junction where the alternative approach joins onto the climb. At this point, the stone wall on the left starts and the climb really ramps up. It never gets steeper than this thankfully but just goes on and on.

You come out of the trees, the wall stops and you can see the top of the pass for the first time. The rocky hills around you somehow often look like a deep purple colour. You can look behind you on the right-hander for a glimpse of the sea. You’ll have come from near enough sea-level if you’ve ridden from the west.

The stone wall reappears and you’re on the last long steep ramp. There’s a lay-by at what looks like the top and more often than not, there’s an ice-cream van parked up too. There’ll often be walkers (or sheep) milling around the road to avoid and put on the hill climb poker face for. Catch a last glimpse of the sea behind as you head into the double-walled section with the summit proper just round the corner.

If you want to join up some of the cycling climbs in North Wales, the Sychnant Pass leads into Conwy. From there it’s easy to head to Llandudno for the Great Orme.

The Great Orme is a lump of rock sticking out of the top of the Llandudno sea-front. It’s a toll road but free for cyclists! The upside to this is that cars are generally going slowly and traffic is light – afterall they’ve paid to be there. You’re basically riding on the side of a cliff so the sea is always there on the right-hand side for amazing views!

There’s a great but dear cafe at the top of the climb which makes for a great stop before heading back inland to take on the valleys.

It’s also a climb I’ve written about before.

Stwlan Dam is probably my favourite cycling climb in North Wales at the moment. It’s the famous one with switchbacks and is similar to Marchlyn Mawr. It goes up to a reservoir, it has a gate to get round at the bottom, a closed road means no traffic and the views are great.

Stwlan Dam is another one that I’ve written about before.