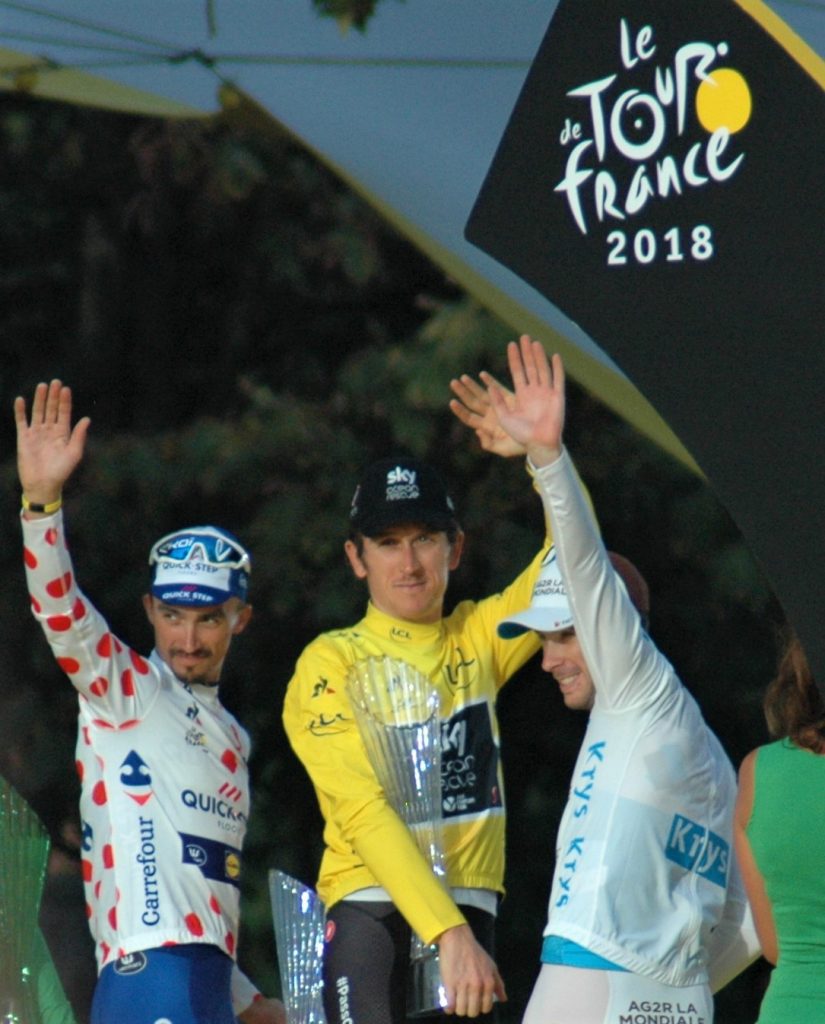 The amount of Tour de France prize money that teams earn varies each year. This year the total prize money pot is €2.288 million – a reduction of €5,000 on 2020’s race. The biggest prize goes to the overall winner who will take home €500,000. Finish a still respectable 15th place though and you’ll only receive €2,000. Movistar’s continuing obsession with winning the best team prize makes sense once you see that it can earn you €50,000 by winning it.

There are a whole host of other ways of earning prize money throughout the Tour de France.

Simply wearing any of the main jerseys for a day can see a rider earn a bonus. Yellow is the biggest one, as you’d expect, with a bonus of €500 paid each day to the wearer. Each of the other jerseys – White, Green and Polka-Dot – earns €300 per day. There’s also an extra daily bonus paid to the best youth rider of the individual stages, they receive €500 per stage.

King of the Mountains Jersey

Probably the most complicated set of prize money bonuses to drill down and explain. There are 4 different categories of climbs, each with their own bonus amounts and number of riders who can earn prize money. At the end of the Tour de France, the top 8 in the classification get prize money. The winner receives €25,000, then €15,000 and €10,000 for the rest of the podium. 4th starts at €4000 and each place drops €500, so 8th receives €2,000.

There’s also an extra added bonus for the first rider over the Port d’Envalira on Stage 15. This marks the highest point in the 2021 Tour de France at 2,408m. The prize is called the Souvenir Henri Desgrange in memory of the race’s founder. The first rider over this point will receive €5,000.

Not quite a jersey, but the most aggressive rider on each stage earns €2,000 for their efforts. The winner of the Super Combative prize at the end of the race will earn €20,000. A reward for their hard efforts to animate the race or the long days spent in the breakaway.

The intermediate sprints feed into the Green Jersey competition, but often the first across the line are the breakaway riders. The top-3 earn prize money in this way – €1,500, €1,000 and €500 – a handy addition to the team’s earnings.

The team prize in recent years of the Tour de France has been calculated by taking the times of the 3 best placed riders on each stage. The riders can vary from stage to stage and the team has to maintain at least 3 riders in the race to be eligible.

Alpecin-Fenix and Deceuninck-Quick Step have had great first weeks with Mathieu van der Poel and Mark Cavendish taking stage victories. Both have spent time in some of the leader’s jerseys as well, pushing up their total prize money income. Bahrain Victorious have started to really show themselves in the last few days. With main GC rider Jack Haig a victim to some of the early race crashes, they’ve been let off the leash to take stage victories. UAE continue to rack up the euros with Pogacar’s predicted long stays in both the yellow and white jerseys.

At the other end of the scale, we’ve got the teams that have largely been anonymous in this year’s Tour de France. Qhubeka Nexthash are on €1,840, well behind everyone else. Some major teams like Ineos and Movistar find themselves down here too as they focus on GC positions and not stage-hunting. Not getting into many breaks also means they’ve not picked up much along the way.

Bahrain Victorious are the closest to a complete team effort. Only Marco Haller has yet to earn any prize money in the race so far.

It’s not a surprise to see Tadej Pogacar leading this classification as well as the race. Stage winners naturally dominate this table, with some like Philipsen and Bouhanni who came close a couple of times also up there. Van der Poel is in 3rd spot but has now left this year’s Tour de France. He should slowly start falling down this list until the end of Le Tour.

A total of 88 starting riders are still on €0 earned in the race. Some of those like Marc Soler will not be adding to their totals having been forced to abandon.

Alpecin-Fenix have had a quieter second week compared to their opening period of the 2021 Tour de France. That’s understandable with Mathieu van de Poel and Tim Merlier heading home. Jasper Philipsen remains to pick up steady gains. Mark Cavendish’s success, 4 stage wins, means that Deceuninck-Quick Step have shot into a massive lead. They’re now more like €30k ahead of Alpecin-Fenix after being neck and neck at the first rest day.

Wout van Aert’s stage win on the Mount Ventoux stage has helped lift Jumbo-Visma into 2nd spot. Trek-Segafredo find themselves listed up further thanks to Bauke Mollema’s stage victory too. The biggest fall at the top end of the table is AG2R Citroen, who have only earned €900 in this second week of racing. BikeExchange have also fallen after a quiet week which saw two of their major riders abandon the race. Movistar have made a big rise from 3rd from bottom to the upper mid-table area after Imanol Erviti’s break and Valverde’s result yesterday.

At the lower end of the table, we’ve still got the same bottom 2 teams. I’m starting to root for Qhubeka as they’ve come close a couple of days now. At this rest day, they’re just €40 behind Team TotalEnergies and it’s not much further to bigger scalps in Ineos Grenadiers and Team DSM. Ineos have come in for a lot of criticism for how they raced yesterday, falling back on old techniques rather than the attacking style of last year’s Giro d’Italia.

Julien Bernard’s 17th place yesterday completed the set for Trek-Segafredo who now have a full team of riders earning prize money. Deceuninck-Quick Step and Bahrain Victorious both have one rider left to complete a set themselves – Tim Declercq and Marco Haller.

It’s no surprise to see Mark Cavendish on top here, he has 4 stage wins and a long spell in the green jersey after all. Pogacar is starting to close the gap and gets a nice daily bonus at the moment for leading both the yellow and white jersey competitions. He could be breathing down Cavendish’s neck after the Pyrenees stages. A number of stage winners from the second week make an appearance for the first time – Bauke Mollema, Sepp Kuss and Nils Politt for instace.

The King of the Mountains battle sees a couple of those riders appear near the bottom of the table. The ongoing account sees Wout Poels and Nairo Quintana both there. Quintana took €5000 for cresting the Port d’Envalira first in yesterday’s stage. Thereby winning this year’s Souvenir Henri Desgrange noting the highest summit of the Tour de France.

Some riders in this list have no left the race – Tim Merlier and Nacer Bouhanni, for instance. Whilst they’ll earn no more prize money for their team, they will still be paid the amount they earned whilst still in the race. Currently 69 riders have earned €0 in prize money this Tour de France (and a fair few of those have gone home already).

The GC bonuses see UAE Team Emirates take a huge lead thanks to their victory. Winning the Polka Dot jersey and Youth jersey also helps big time. Jumbo Visma’s 2nd place in GC and Wout van Aert’s multiple stage wins and consistency sees them earn plenty too. After them, it gets tight. Deceuninck-Quick Step are pipped by Bahrain Victorious, whose team victory prize gets them over the line. Ineos have shot up from near the bottom to 5th place thanks to Carapaz’s eventual 3rd place finish. The bottom hasn’t changed though. Qhubeka were bottom for a long long time and never managed to earn enough, despite getting in more breaks later on. DSM were a big disappointment in the 2021 Tour de France and their total reflects this.

The French ProTeams did quite well this year. B&B Hotels p/b KTM were solidly mid-table thanks to Franck Bonnamour winning the super combative prize. Arkea-Samsic weren’t too behind, despite only having a handful of riders left in the 3rd week. Team TotalEnergies were rather quiet throughout, but even they are handing onto the bottom of a very tight-knit lower group.

Tadej Pogacar unsurprisingly was streets ahead of his nearest challengers, on the road and in the prize money table. His total in 2021 was €5k higher than in 2020. The table follows the final GC until reaching Mark Cavendish whose 4 stage wins and Green jersey success place him in 5th. Not a bad last-minute selection! Wilco Kelderman won the unofficial ‘Zubeldia’ award for quietly finishing high up in GC, he’s the 6th biggest earner. Wout van Aert’s swiss army knife approach to cycling saw him win a mountain stage, TT stage and sprint stage.