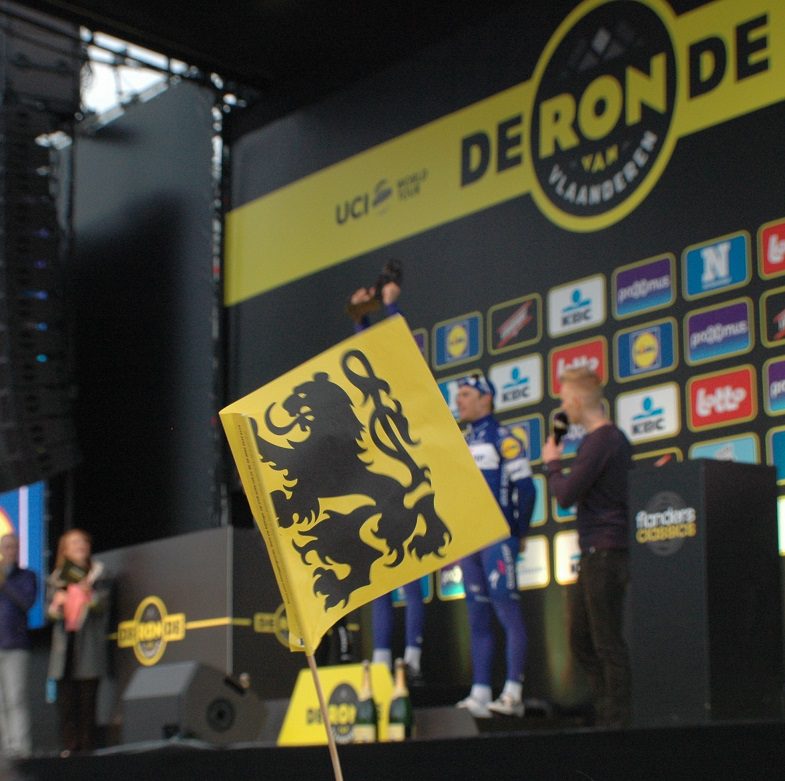 During the week we’d had two days of full-on rain. Not good when cobbles are involved. We also went out for a ride with the intention of my doing some Paris Roubaix recon, only for me to fall off, get some scrapes, bruise a rib and worst of all, smash a pedal to bits. I’d also had to be rescued the day before whilst around 5-10 miles from home because of an immense downpour (I did, however, manage to grab myself a Cofidis team bottle after following them for a mile or two). Not the best preparation for the Tour of Flanders! A replacement pedal had been found and luckily on the day, the weather was good with only the fleeting drop of water from the sky. 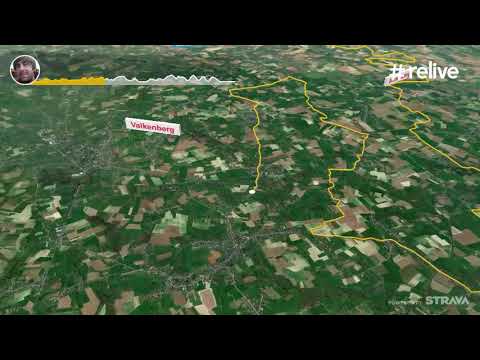 The Tour of Flanders sportive is a huge event, 16,000 riders were involved – four times the number that we’d had around us for Gent Wevelgem. This had advantages in that we were never on our own, there was always someone to draft behind but caused issues on some of the climbs – narrow roads, cobbles and steep gradients don’t help traffic flow. On every climb it was a battle for position with those used to racing in a pack, probably quite comfortable and the sportive warriors somewhat intimidated.

There were lots of named sections for us to negotiate and they can be split into two parts – the flat cobbles and the hilly cobbles.

The flat cobbles of the Tour of Flanders Sportive

The first section of flat cobbles we came to was Paddestraat. It went on for what felt like ages as well. After rounding a bend very gingerly on the cobbles, a small gutter appeared on the right-hand side. as that looked a lot easier I decided to ride in that. Some people riding in front had a similar idea but couldn’t seem to ride in a straight enough line to stay on it though. One took a detour over the grass bank to the side whereas others kept bouncing off the cobbles on the edge. Eventually, I got some clear space and was able to tank along. Hannah rode the entire stretch on the cobbles, her hands were rather painful. 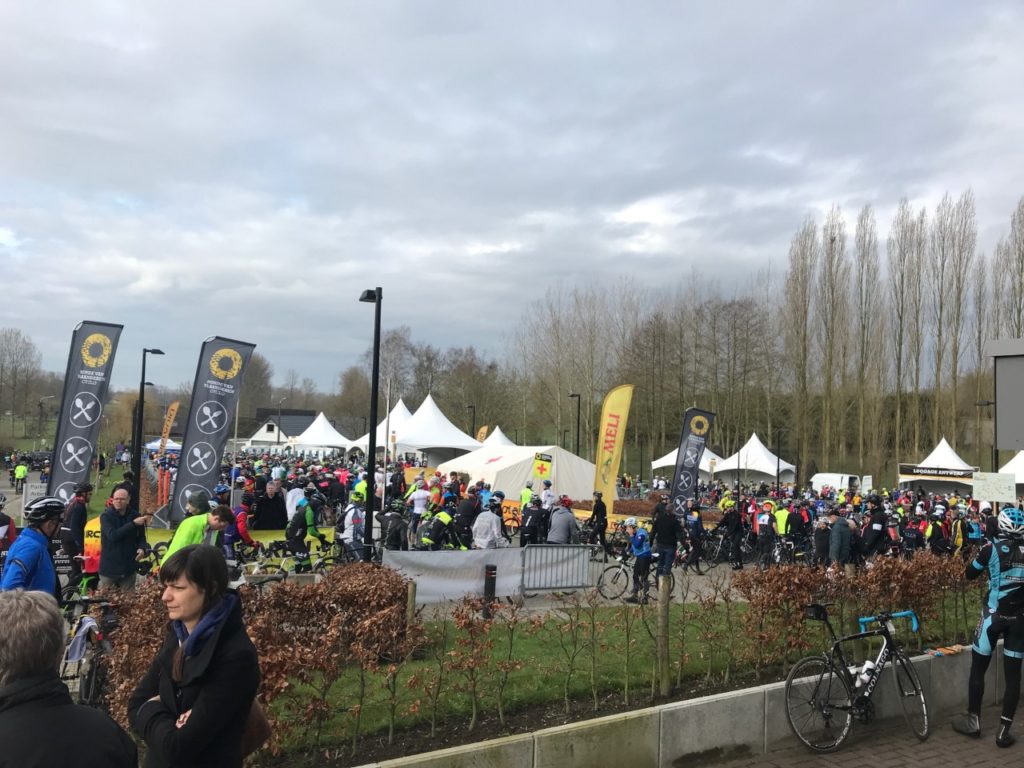 The next section was Haaghoek, we got stuck behind a car that was stuck behind other riders. Top tip, don’t take the same narrow roads when there’s a sportive on – it won’t be a shortcut. It was particularly annoying as slow cobbles hurt the hands more and we’d lost all momentum for the short climb the other side. Once the car had gone we were able to speed up and past lots of people, it wasn’t that bad a section.

The final flat section, Mariaborrestraat led directly into the cobbled climb of Steenbeekdries and then had a downhill cobbled descent on Stationsberg (which I climbed up in the E3 Harelbeke sportive last year). This section gave no let-up and others I’ve spoken to said the same. After getting the heart rate up on the flatter part, this left no room for extra energy for the climb. This made it particularly difficult. Then followed up by the fast descent, on cobbles, meant that fingers, hands and arms were thoroughly numbed. Whilst having a quick breather someone went past shouting ‘I HATE COBBLES!’. Hannah also reckoned she saw around 30 bottles on this stretch, the sheer length and effort of which seemed to make them pop out the cages in a suicide bid. 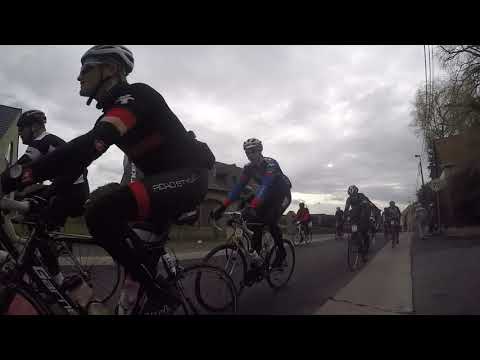 The climbs of the Tour of Flanders Sportive

The legendary Koppenberg was the hardest climb, but we didn’t do it. When we got there, there was a queuing system and we took the alternative to use the roads around the side rather than walk up it. The climb is famous for being particularly narrow and particularly steep – cobbles on 25% for longer than on the Kemmelberg. The sheer weight of people made this a bottleneck. We made the right decision to go round – no-one I know who attempted it made it up without walking.

The Paterberg takes place in the race as the last climb and has often been where the race has been decided before the quick, flat blast back into Oudenaarde. We both ended up walking this one. I found myself stuck behind someone with a loud skipping chain that ultimately came off. When I paused for this I couldn’t keep spinning so had to hop off and get over to the side and out the way as quickly as possible. Hannah stopped because people were stopping in front of her and left no room to carry on. With less people around, I did manage to scale it last year.

Oude Kwaremont – I was slower than last year, but we both got up without stopping. Hannah said it was the part she was most proud of, getting herself up it after 70 miles without stopping (I was also proud). Once the climb is over, there’s another mile or so of flat cobbles before a short kick up again. I also managed to overtake Neil from Gorilla Cafe rides coming up to the village for some kudos points. This climb was packed with spectators – there were even motorbike cameras and helicopters following us here. As we entered the village (and the pubs) lots of spectators were cheering everyone on. 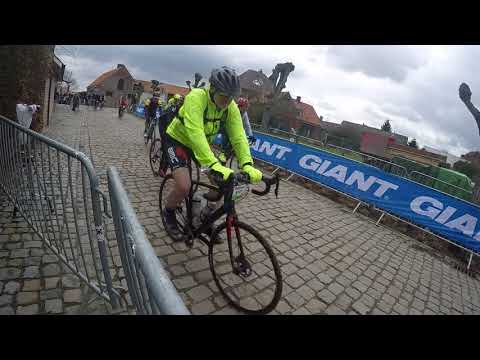 Karnemelkbeekstraat – I smashed it up this one after my Garmin set me a target to beat a Stafford RC member’s time (I did by about 20 seconds), at the top someone with a loudspeaker was announcing as many names as she could – we both got a mention. A large Red Bull area was just past the top too, I managed to go in, get a can and re-join the route without stopping – the perfect pit stop, but then waited for Hannah shortly afterwards. She’d missed out as someone cut across her last minute to help themselves!

Eikenberg – I had a PB to beat on this climb (and Neil’s according to my Garmin) from last year. Riding on what felt like muscle memory from watching the pros go up it in E3 Harelbeke a week before, I moved from side to side to ride on the tarmacked bits to avoid the cobbles and the gaggle of people. As the climb flattened out near the top to a meagre 2-3% I even managed to assume the time trial position to gain some extra seconds. I took about 23 seconds out of my previous time. Hannah was braver than I was and rode it all on the cobbles. 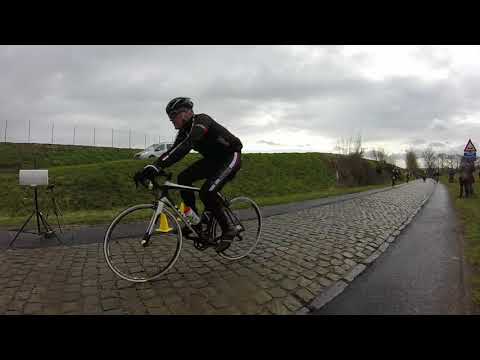 Taaienberg – Another famous climb, I rode it in the gutter made famous by Tom Boonen and his attacks – Hannah once again braved it on the cobbles. I was again trying my best to get a good time but didn’t have any information to go on. Unhelpfully my Garmin, when someone I know hasn’t ridden up the climb, defaulted to showing me either Greg van Avermaet or Michal Kwiatkowski’s times – not helpful! I ended up with a time in the top 8-9% of all people to have climbed it ever on Strava which I was very pleased with!

Finishing the Tour of Flanders Sportive

After descending the Paterberg, I was given permission to smash it for the last mile having guided Hannah back and blocked the wind for her the last 10km. A group came past so I hooked up with them before time-trialling it past them. I ended up averaging 28.6mph for the last 1km before crossing the finish line – this was quicker than the likes of Greg Van Avermaet, Tiesj Benoot, Wout Van Aert and the winner Niki Terpstra himself managed the next day.

Once back at the Sportive HQ, Hannah bought herself a Tour of Flanders jersey – they’d just sold the last one in my size, unfortunately. We then treated ourselves to a beer and a burger dinner in the post-sportive marquee to celebrate our anniversary. 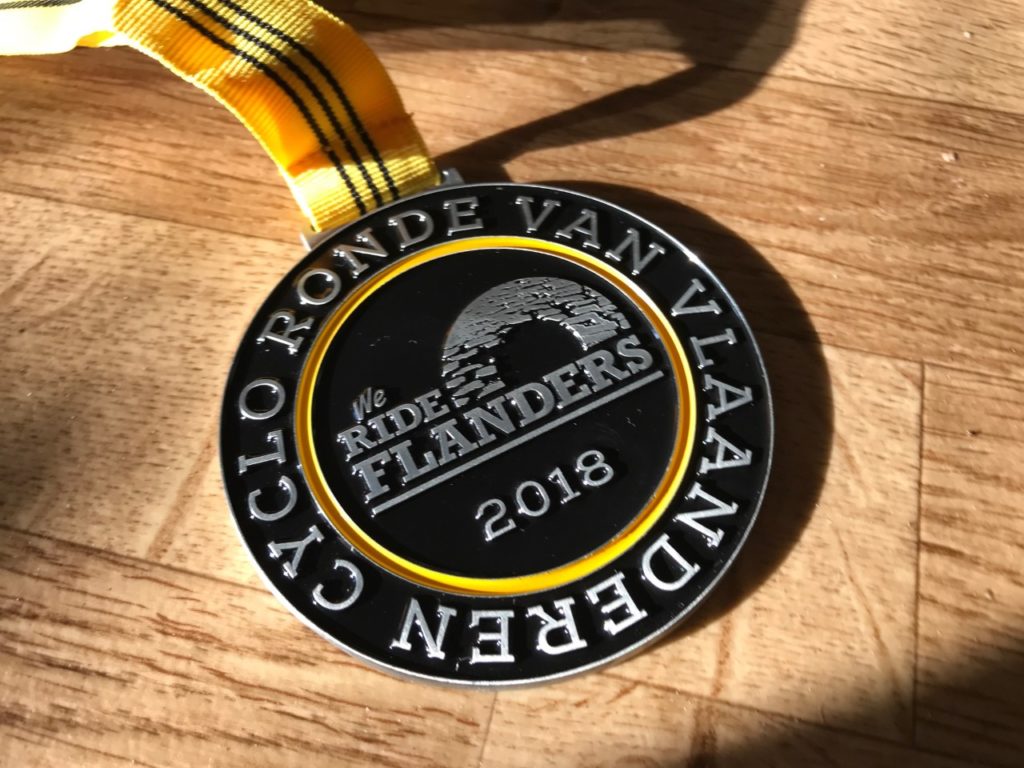