Trek-Segafredo Head of Performance Josu Larrazabal outlines the challenges of managing the riders’ physical and psychological conditions over the last months and preparing for an abnormal season.

Just like everyone across the world, the Covid-19 pandemic brought unfamiliar feelings of uncertainty. For professional athletes, no one knew when or if competition would resume, and if it did, what it would look like. Professional cyclists rely heavily on a regimented schedule in all aspects of their sporting lives: daily training is meticulously planned by coaches, a racing calendar dictates when to be in top form, and even at races a strict schedule ensures everything runs smoothly.

“These top-level athletes are really driven by the motivation to race and perform, so when the calendar was suspended and doubtful, the challenge was completely mental,” explained Larrazabal.

At the start of the pandemic, it was important to assess our teams’ situation quickly, continued Larrazabal.  The riders were spread across Europe, living under varying regulations according to their governments. Many European countries imposed strict lockdowns, meaning that not even professional cyclists were allowed to train outside.

For the riders who were confined indoors, it was especially hard. We realized quite quickly about the new mental challenge that faced the riders.

Instead, the riders got very familiar with their Saris smart trainers at home. Around 60% of the men and 40% of the women were forced to train exclusively indoors during this period. The American riders opted to fly back to the US before flights were grounded because they were still able to train as usual in the United States. “For the riders who were confined indoors, it was especially hard,” Larrazabal affirmed. “We realized quite quickly about the new mental challenge that faced the riders.”

Knowing that this was an especially stressful period for the riders, special attention was given to them through sport directors and coaches. Of course, all riders are unique, and we knew that some individuals would struggle more in this period than others, explained Larrazabal. With this in mind, we gave more attention and support to those with the most doubts, concerns, or worries.

For those who were coping well, we were able to prescribe more stable routines, and for those who struggled a bit more, we decided to introduce more dynamic routines, continued Larrazabal. For example, alternating the load with the recovery days and introducing little challenges.  We proposed stage race simulations to some riders, which were useful in two respects: making up for the lower volume of racing this year and as a welcome variation to normal training routines. 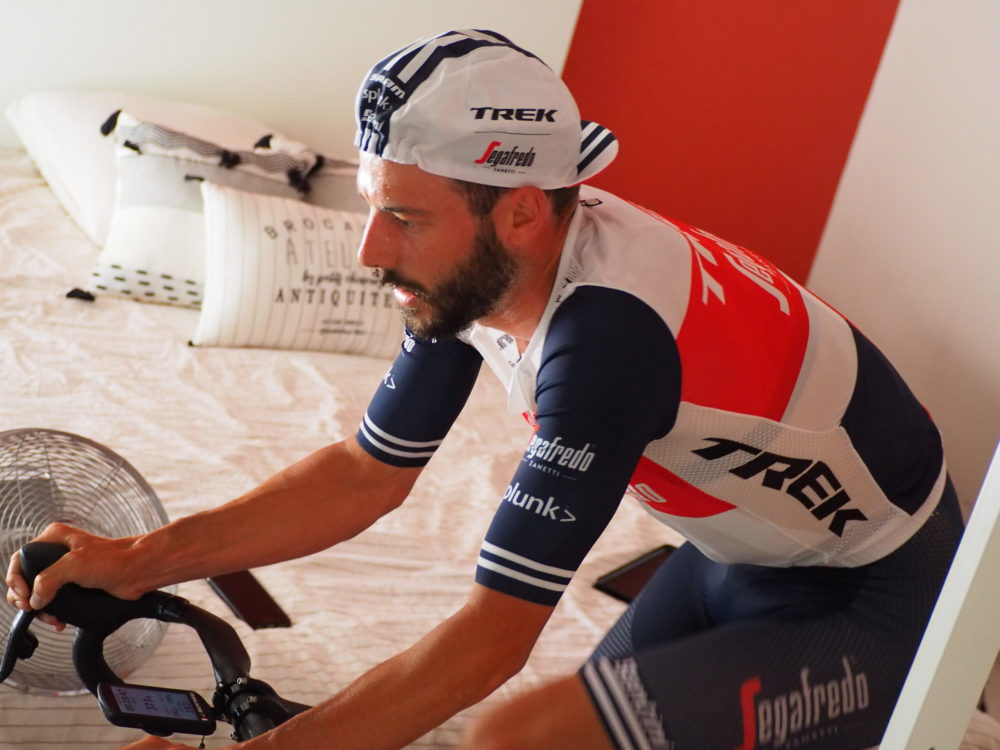 Training indoors became the norm for some Trek-Segafredo riders.

“We looked for a way to provide a stimulus that never normally would have been included in a training program, but in this case, it was necessary for a mental boost, rather than a physical goal,”  pointed out Larrazabal.

These small challenges took various forms; Giulio Ciccone and Ruth Winder decided to Everest indoors and outdoors, respectively. Giulio completed the challenge in the virtual domain by riding his home trainer on his balcony for 11 hours, surpassing the height of Everest until he climbed 10,000 meters. Ruth rode up and down Flagstaff mountain in Boulder, Colorado 14.6 times. Other riders completed similar epic rides, like Ellen van Dijk who rode 312km with new teammate Pieter Weening. Typically, these types of rides would not be used as part of a training plan because the riders are not training for that type of riding.  But they provided motivation and a necessary morale boost during this difficult period. 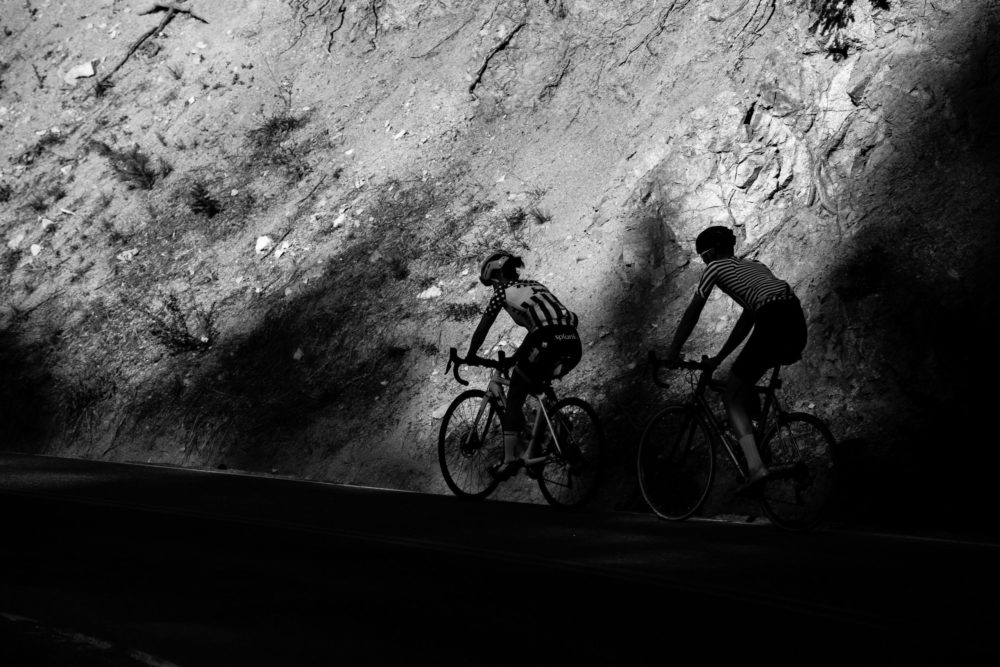 It was very personal, every rider had a very different experience, and we tried to stay close to them to understand how they were living it.

The riders were advised to take a break from the bike at the start of the lockdown. Despite the uncertainty, it was a welcome chance for them to spend some quality time with family, something not common in the life of a professional athlete.

After the initial break, we managed the situation by mixing blocks of recovery with no bike with 3-4 week loads of training until we had more information about the race calendar said Larrazabal. “It was very personal, every rider had a very different experience, and we tried to stay close to them to understand how they were living it,” he added.

The diagram below illustrates the Chronic Training Load (CTL) of the Trek-Segafredo male and female riders. The CTL is the rolling average taken from 42 days of Training Stress Score (TSS* – see the footer for more information on these values). 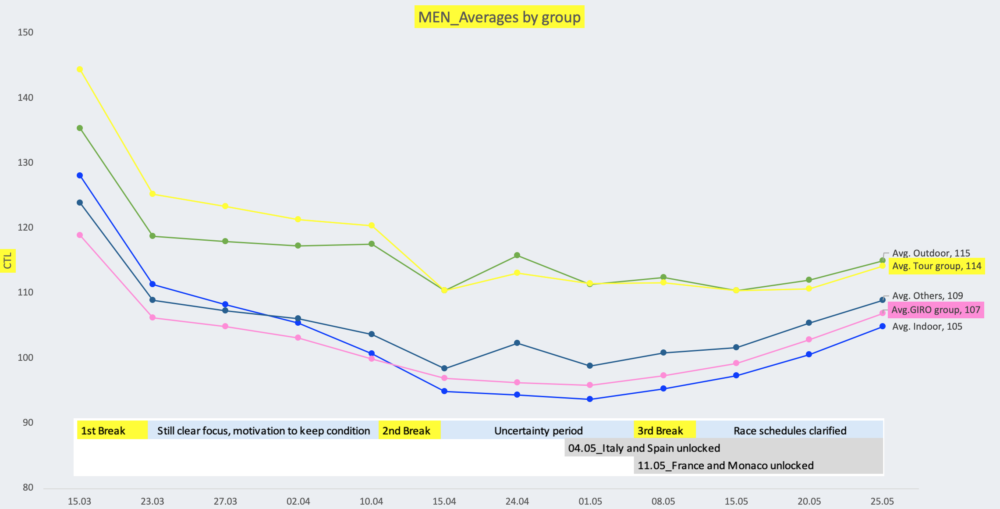 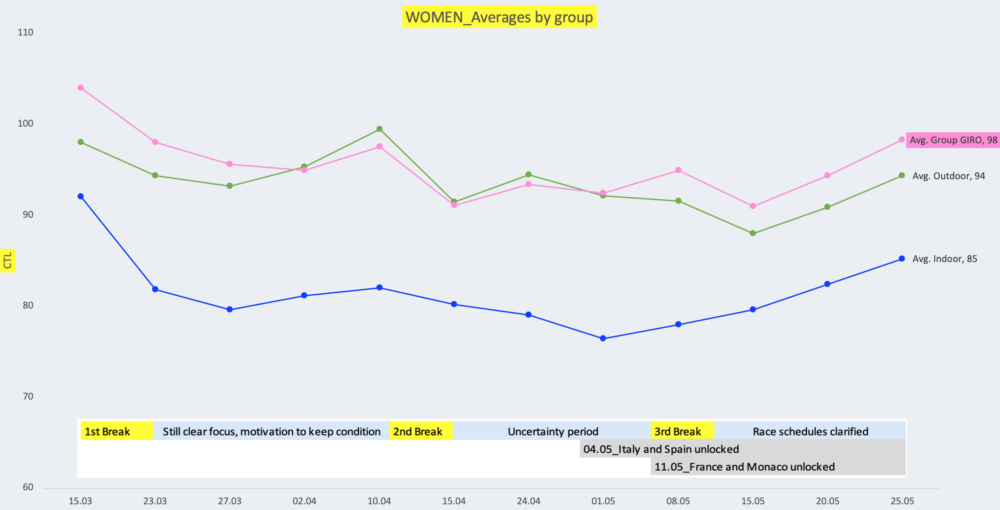 Larrazabal explained: “In the chart, you can see a drop in CTL related to each break week. As the charts demonstrate, the men and women shared similar experiences during this period. The first three weeks were easier for the riders to manage, and you can see that some individuals kept their level well after the first break because the hope was to come back in May.

“Then it was understood that it would be a long time before competition resumed. The April period was a huge time of uncertainty, and some riders started to struggle more. On May 4th Spain was ‘unlocked’ and Italy, France, and Monaco followed on May 11th. Then, after the third break, we started training more regularly as the racing schedule became clearer, at which point you can see the trend of the training load increase.

“It is particularly interesting to pay attention to the averages of the ‘indoor’ riders. You can see that the motivation and training load returns as soon as they were training outside again, and the calendar became clearer. It is also clear that the Giro d’Italia group is behind the Tour de France group, which makes sense as there are five additional weeks until the Giro compared to the Tour.”

Throughout this period, the riders completed a considerable block of base training, long rides and low intensity, and a return to gym work to recover some of the strength basics. It was a necessary component of re-building the fitness, but Larrazabal quickly pointed out the emotional benefits of this training block: “Mentally, it was needed to enjoy that regained freedom and once more enjoy the feeling of training with a clear plan and goals.” 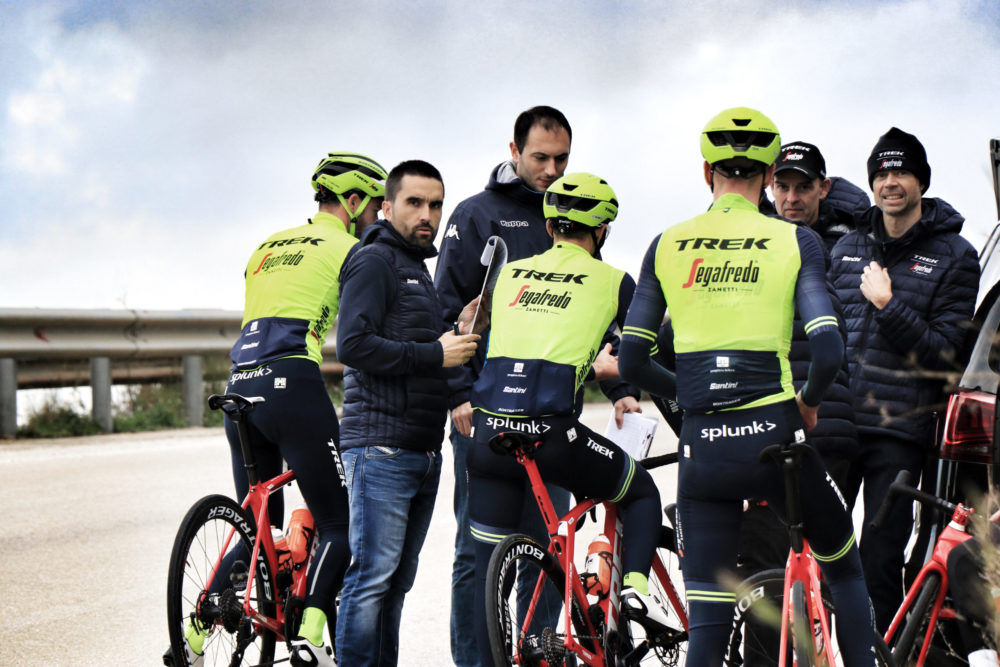 Josu Larrazabal during the December training camp in Sicily.

In recent weeks the riders have finished the first round of testing at the Mapei Sport lab.

“The reality is we found the riders did a great job with their training and they aren’t arriving with extra weight. They were ready to ramp up the condition with more specific training in mid-June.

“Now, it is time to do more specific work and complete a good block of threshold training before we head to training camps for the final preparations. Most of the riders will go to altitude camps. We have the Tour group in Isola and the Giro group in San Pellegrino, along with four women. The other women will do a training camp in Basque Country before their return to competition. All remaining riders will do training camps in smaller groups.”

After the training camps is the eagerly anticipated return to racing. Most of the Tour group will do a block of races in France, including Route Occitanie, Tour de l’Ain, and the Critérium du Dauphiné. The unusual circumstances require a different approach than the typical start of the season since the main goals are much closer to the first races than before. Now there’s no time to catch up or close a gap in the case you are behind, declared Larrazabal. “The approach will be to make sure we are ready from the very beginning,” he stated. 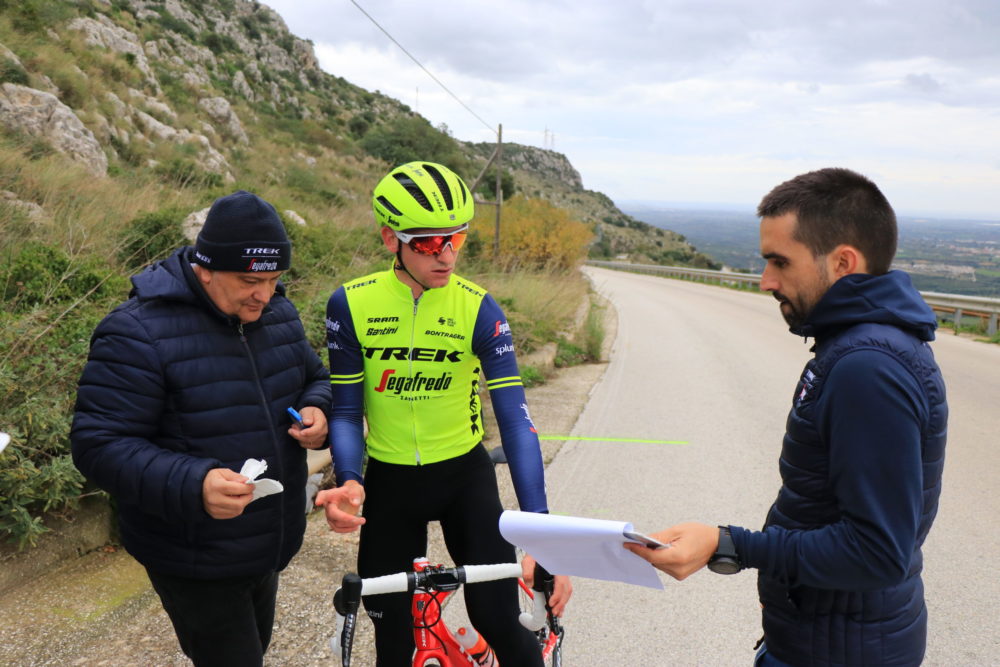 Giulio Ciccone during testing at the December training camp in Sicily.

The situation is different for the Giro group. The Giro riders will start with a big block of races with the Italian Classics, including Strade Bianche, Milano-Sanremo, and Il Lombardia, followed by Tirreno-Adriatico and finally, the Giro d’Italia. The difficulty lies in the gap between the first classic, Strade Bianche, and the Giro – a full nine weeks! “It’s a long period to try to maintain a top-level [of fitness], so we will aim to start well, recover a little between the classics and Tirreno, then ramp up again for the Giro,” said Larrazabal.

The necessity to complete altitude camps in order to be in top shape ahead of a big block of racing makes the decision even more difficult. “It’s not easy to come from altitude camps and be ready straight away for one-day events, but we are forced to do that to prepare for the Giro. In this case, it was a clear but challenging decision to make,” concluded Larrazabal.

* A note on the data: The CTL is the average for 42 days of the Training Stress Score (TSS). The TSS is a load of every single ride based on the relationship between the Normalized Power (intensity of the ride, known as NP) and the Functional Threshold Power (‘engine’ of the rider, known as FTP, in this case, defined by the rider’s 35′-40’ peak power). According to this, the higher the NP, the higher the TSS.