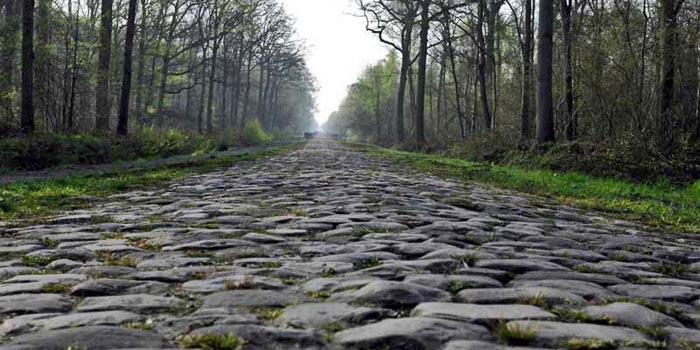 The Arenberg Forest or Trouée d’Arenberg in French is a stretch of road in Northern France. It’s famous for its brutal cobbles and for forming the crunch point in the men’s Paris Roubaix race. A dead-straight line through the Arenberg forest, riders hit the first cobbles at huge speed after an almighty battle for positioning to be near the front going into it. Because of its location, it is also known as the Arenberg Trench too.

The Trouée d’Arenberg was first laid during Napoleon’s rule but it only made its first introduction to Paris – Roubaix in 1968. Discovered’ by the 1962 World Champion Jean Stablinski, he had worked in the mine that runs alongside the Arenberg. Stablinski famously said that he was the only rider to have raced over the Arenberg and worked underneath it. There’s now a memorial to Jean Stablinski at the village end of the trench.

The Trouée d’Arenberg was removed from the parcours of Paris – Roubaix between 1974 and 1983. However, it’s been pretty much ever-present since then. The only time it hasn’t been used was in 2005 and safety measures were put in for its restoration to the route in 2006.

There are many iconic views of the Arenberg trench. Its long straight path through the forest into the distance gives viewers the feeling of cycling between two immensely high green walls. The old railway bridge to the mine is the only man-made object overhead the cobbles. Its industrial construction seems to lend itself to black and white photos. The contrast gives any picture another stand-out feature.

The top tips for riding the Arenberg are to stay in the middle (or crown) of the road. Alternatively, you can keep to the absolute edges. Here you may be able to ride in the dirt between the barriers and the cobbles. The path alongside the cobbles is barriered off for Paris Roubaix these days, riders have to ride the toughest bits.

The Arenberg Forest in Paris Roubaix

The segment gets its legendary status from being the moment where potential victors can win or lose Paris Roubaix. In modern times, it’s more likely for riders to lose the race here than actively winning it. The peloton hits the cobbles with an all-out sprint. With so many people on the limit, combined with the possibly muddy, wet cobbles have led to many crashes over the years.

Former world champion and 3-time winner of Paris Roubaix (including 1996), Johan Museeuw most famously crashed here in 1998. Museeuw shattered his kneecap and later picked up an infection that saw him come close to losing his leg. When Museeuw won Paris Roubaix again in 2000, he pointed to this leg as he crossed the finish line.

Philippe Gaumont broke his femur on the Arenberg in 2001. Wout van Aert and Peter Sagan managed to come down too in 2019, luckily without injuries.

2016 saw a particularly brutal set of crashes involving Mitch Docker, a motorbike and Elia Viviani. The first crash included Docker. His fall onto the cobbles was so heavy and so bloody that for a time people thought he may lose an eye. This halted the bunch and as the following motorbike tried to brake, it lost control and took out a standing Viviani, injuring him. Mat Hayman famously went on to win that edition of Paris Roubaix.

My experience of the Arenberg

I was lucky enough (or unlucky) to ride the Arenberg forest in 2013 and definitely did not have the best experience. I wrote about it here. My group stopped for photos at the beginning, then got stuck behind Sean Kelly doing a piece into the camera for Eurosport. Then I bounced into the fencing by the cobbles and did a forward roll with the bike attached. Eventually, I managed to finish. A lot happened in those ten minutes!

I’ve since ridden the Arenberg sector again in 2018 but recent rain meant it was covered in mud. The back wheel snaked back and forth as it struggled to grip. Ultimately, I rode on the track next to the cobbles instead of repeating the experience of falling off again!