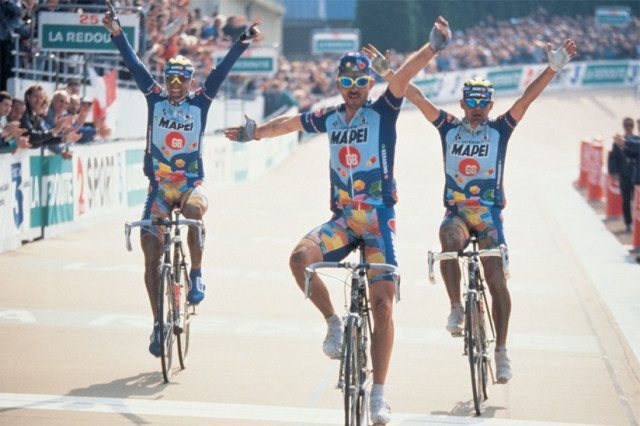 After the first Flashback piece of the season back at the Tour Down Under, this one looks at the all Mapei-GB podium of the 1996 Paris-Roubaix.

With 86km to go in the race, 4 members of the Mapei team escaped off the front of the peloton. They were Johan Museeuw, Gianluca Bortolami, Andrea Tafi and Franco Ballerini. It’s very very rare to see most of a team just disappear off the front so far from the finish. It’s even rarer to see no-one from another team able to make the move. The most recent race where I can remember a similar event is the famous 2015 Omloop Het Nieuwsblad. In that race, Ian Stannard bested a trio of Quickstep riders.

Whilst trying to get away Franco Ballerini punctured 3 times within 12km and ended up falling back. Ultimately he’d be caught by Lotto’s Andrej Tchmil and Gewiss’ Stefano Zanini. He got to enjoy a nice draft to the finish line once he stopped doing his own chase. Andrej Tchmil missed a corner and ended up 3 minutes behind the other two riders by the finish. Museuuw himself punctured on the Orchies secteur and his teammates had to wait for him.

The managing director of team sponsor Mapei called the team director Patrick Lefevere with 15km to go. The director wanted to ensure that Johan Museeuw won the race. With 8km to go Museeuw punctured though which caused confusion amongst the 3 riders at the front. Eventually Tafi and Bortolami waited and once they arrived at the Velodrome, Museeuw won without having to sprint. The sponsor’s directive being adhered to. The pair of Zanini and Ballerini finished 4th and 5th. They were 2 minutes 38 behind the podium and a similar gap ahead of the next group.

Telekom’s Brian Holm was behind, he later achieved huge success as a manager/coach at HTC and Quickstep. He finished 7th in the chase group. As this was the 1990s, British influence on the race was minimal. Sean Yates finished 45th, one place ahead of future Paris-Roubaix winner Stuart O’Grady.

The 1996 Paris-Roubaix race eventually became the quickest race in terms of average speed since the route had been altered in 1968. Museeuw winning ride was at an average of 43.31kph.

With no effective test for EPO, this result along with the similar podium lock-out at the 1994 Fleche Wallone for the Gewiss team, meant the introduction of the 50% hematocrit rule in 1997. The ruling meant that riders whose blood contained too high a percentage of red blood cells wouldn’t be able to race or would have results taken off them. The high percentage of red blood cells was a signal that a rider was using EPO. The benefit being that the blood would be able to carry more oxygen around the body. It’s a lot to get into now, but the 1990s, this form of doping was rife.

Johan Museuuw went on to win the World Championships later that season. As well as two more editions of Paris-Roubaix in 2000 and 2002. The 2000 win was the most famous. It came after he nearly lost a leg due to a crash in the 1999 edition and suffered gangrene during his recovery. A further Tour of Flanders win in 1998 joined his two previous wins in 1993 and 1995. To cap off a strong 1996, he also won the Road World Cup. A precursor to the current WorldTour that is no longer awarded to individuals. In 2012 he indirectly confirmed he doped throughout his career.

Gianluca Bortolami went on to win a monument in his own right – winning the 2001 Tour of Flanders. This was the obvious highlight of his career, along with winning the Road World Cup in 1994. In 2004 he was named as part of the Conconi moral judgement that said he doped whilst riding for Mapei.

Andrea Tafi was more successful with 3 monuments ending up on his palmares after this race. He won Il Lombardia later on in 1996, Paris-Roubaix in 1999 and the Tour of Flanders in 2002. Tafi hit the news again in 2019. He attempted to get into a team that would be riding Paris Roubaix this season. It’s a long shot as Tafi is 52 years old. Although, it came out that he’d found a team but that team didn’t receive a wildcard entry. So Tafi won’t be on the start line. Tafi was on the French Senate’s 2013 list of re-tested 1998 Tour de France samples that showed as EPO positive.