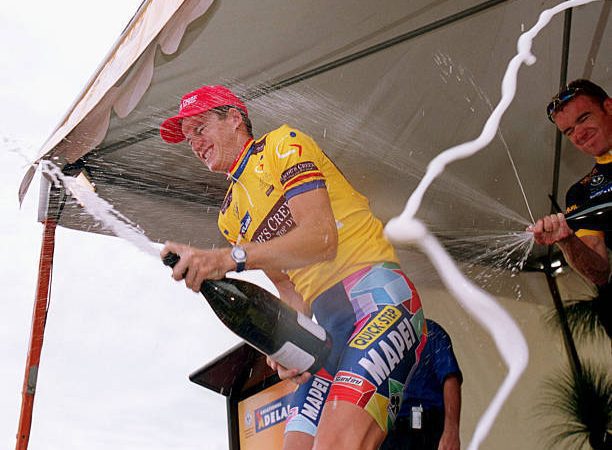 The year is 2002 and the new cycling season has kicked off. The first race is in Australia, the first stage race is underway and Michael Rogers is leading. I’ve covered other Flashbacks such as the 1999 Tour de France and 1996 Paris Roubaix.

The Tour Down Under was still a relatively new race in its current form. Only in its 4th edition in 2002. Consequently, the field was made up of Australians and a few European teams. Some of those teams we still recognise today like Mapei-Quickstep, AG2R-Prevoyance and Francaise de Jeux. Australian sprinter Robbie McEwen won 4 of the 6 stages. Including, surprisingly, the stage with Willunga Hill – now a Tour Down Under staple.

The then 22-year-old Michael Rogers managed to get himself in a break of 15. The break included future Tour de France winner Cadel Evans and Paris-Roubaix winner Stuart O’Grady). Rogers was racing for the Australian Institute of Sport here but was a Mapei rider really. That break on Stage 2 earned 8 minutes over the rest of the peloton. 7 of those 15 riders escaped contesting the stage win. Rogers sprinting to the win ahead of the Italian pairing of Fabio Sacchi and Andrea Tafi. Sacchi held the overall lead by 1 second from Rogers from Stage 2 to Stage 5, where our story begins.

Michael Rogers starts having issues with his bike

Michael Rogers had a crash with a motorbike on this stage. This saw his rear derailleur snap off the frame of his Colnago C40 and into his rear spokes. This is something I’ve managed to do on my own bike too. Unsurprisingly you come to a stop pretty quickly as pedalling through will destroy the wheel.

Rogers did the standard pro response to a crucial bike mechanical and threw the blue bike to the ground. With the bike on the ground, Rogers looked around. Right next to him is an almost exact copy of the bike he’s just killed. It’s brown rather than Mapei blue but is still a Colnago C40. The whole change takes just a few seconds.

The bike also happens to be exactly the right frame size at 56cm. Even better, it also has the right pedals on it for his cycling shoes to fit. To understand how important this is, we saw how Chris Froome struggled on Mount Ventoux in 2016. The replacement Mavic bike he received was tiny and had different pedals, so his shoes didn’t clip.

After all the bike change antics, Rogers had lost around 30-40 seconds to his breakaway companions. Despite the saddle being a touch too low, to begin with, he caught up with the breakaway. Rogers then took out the next intermediate sprint to gain 3 bonus seconds for the GC.

Near the end of the stage, Rogers finally had a team car come and adjust the saddle height on the fly. The breakaway split up completely as they all attacked each other.  Mapei teammate and future Tour de France winner Cadel Evans won the stage. Evans was roughly 16 seconds ahead of a scarcely believable Michael Rogers.

Rogers had managed to gain a GC lead of 21 seconds over his fellow breakaway rider Alexandre Botcharov. Rogers held this over the final stage the next day to win the overall in the 2002 Tour Down Under.