Home » A strong collective for the first race of the season

A strong collective for the first race of the season 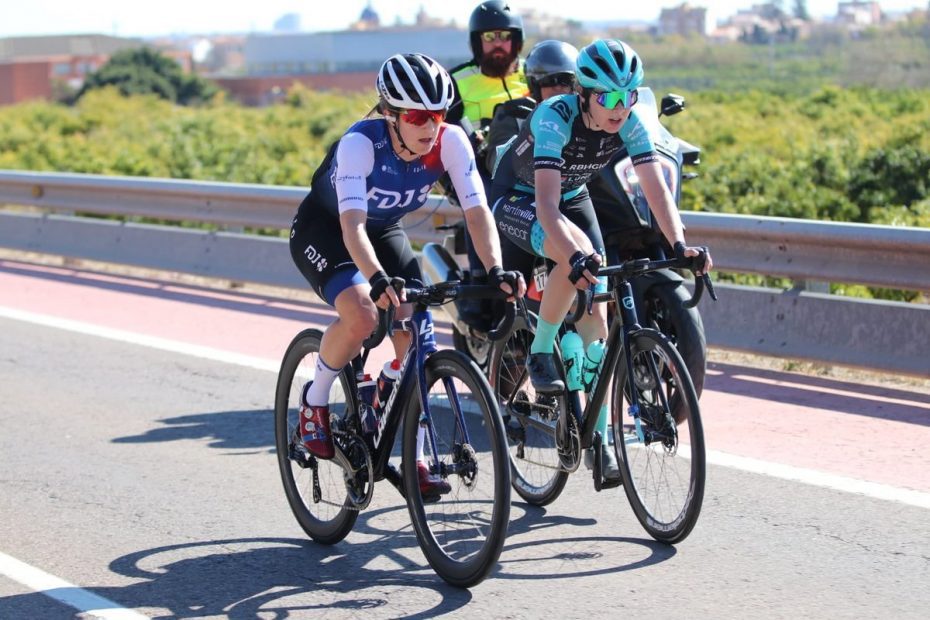 Yesterday, in Valencia (Spain), the first race of the 2022 season for the team ended. 4 days of racing on a hilly course where the FDJ – Nouvelle-Aquitaine – Futuroscope team was able to show a strong collective, often on the attack in decisive moments.

From the first stage the team made a strong impression, with on the finish line a 9th and 10th place of Grace Brown and Cecilie Uttrup Ludwig. Marie Le Net also showed a very good level by taking part in numerous breakaways. On Friday’s stage, the team led the chase alone, trying to make up the 50 second gap to the breakaway. He will have missed three seconds to be able to come back, but the team showed a very strong collective. On Saturday the team was able to take things in hand, and respond collectively present, especially in the passes with all the girls at the head of the peloton to lead a steady tempo. On Sunday, the last stage and not the least, Grace demonstrated a real tour de force, escaping for 55 km, including 25 km alone in the lead. After counting 1 minute 30 ahead of the peloton, she was caught 9 km from the finish, which was decided in a massive sprint.

Cédric Barre, directeur sportif : “The atmosphere was great, the girls are now more than teammates, they showed a very strong commitment to each other. All in all, a very good week, which was a week of preparation for the objectives. And I think that today our status within the peloton has changed a bit, in any case the view of the others has probably changed because they must have seen that this winter we had worked well and that the team had passed a milestone.”

Marta talks about the race : “I’m so proud of my team! The first thing to remember from this first race is the perfect team spirit which allowed me to fight until the end. The race started with good feelings on the first day , I was able to follow the bigger attacks but unfortunately the road to the finish line was long and a small peloton came back for the sprint. There was a big fight in the 2nd stage but the team was still there I’m very happy with the third stage, unfortunately I had a crash just before the last climb but I was able to come back and fight for a good third place.
For me it’s a good start to the season, I can still improve and I’m looking forward to the next races. I want to thank my teammates, the staff and Stephen who gives us everything we need.”

Grace tells us about her race : “Valencia was a very good introduction for me with the team. All the riders and the staff started each day with the motivation and the commitment to give their best, which led to a strong performance courageous at every step. Brodie, Marie and Victorie were constantly active, following the attacks, launching their own, and stepping up to the front when needed. Marta and Cecilie showed courage on the climbs, giving their all they could to get two podium places. I’m also happy with my personal performance and I enjoyed being able to ride aggressively and put the other teams under pressure. It was so nice to be able to ride together on the podium at the end of the round after winning the team classification. It was a perfect start to the season!”