What happened to… Michael Rasmussen 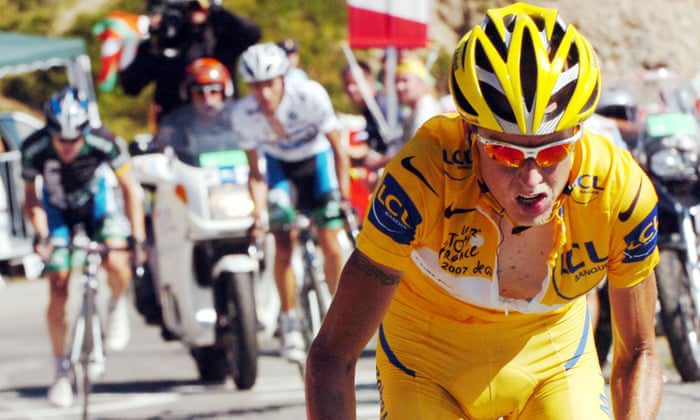 This week, we’re looking at the Dane Michael Rasmussen. Following on from last week’s look at Michael Boogerd, I promise I haven’t got it in for riders of Dutch teams from the 1990s! At his peak, Rasmussen was famous for always thinking about his weight. The often heard story was that he would count out the grains of rice he would have for dinner each night. His distinctive thin look meant he earned the nickname of the Chicken from Tølløse.

Rasmussen started out as a mountain biker rather than a road cyclist. His first pro season was in 2002 at the age of 27 years old. He’d won the cross-country mountain biking World Championship 2 years earlier. As a Dane, his first opportunity was naturally on the Danish CSC-Tiscali team.

He took part in the Giro d’Italia, finishing 45th but overall wasn’t an instant success. A run of late-season form saw him win a stage of the Vuelta a Burgos. A series of top-10 placings at the Autumn Italian climbing races followed, which allowed him to get a contract at Rabobank for 2003.

2005 saw a dominant Rasmussen take his first polka-dot jersey. Topped off with a stage win that saw him escape after just 3km and ride solo to the finish after 168km. The 2006 Tour de France was similar. Rasmussen won the mountains jersey won fairly comfortably but another solo mountains stage win. This time he attacked after 4km and 178km later, he’d won the stage by over a minute. GC-wise, he wasn’t a full contender during these Tours. He finished an unsurprising 7th in 2005 and 17th in 2006. He was running 4th in 2005 in fairness. Until a crash-marred final time trial pushed him down to 7th.

2007 was different. Levi Leipheimer and Alberto Contador were fighting amongst themselves to be the team leader in the absence of Lance Armstrong. Cadel Evans was also plugging away on a weaker team. It looked like Rasmussen would win the Tour after winning Stage 16 on the Col d’Aubisque. The lead was now just over 3 minutes with just 2 rolling stages and a time trial left. And finally the procession into Paris on the Champs Elysees.

Rumours and stories had begun to swirl. A Danish TV crew had asked an innocuous question to a former-pro about Rasmussen. The former-pro, in his effusive efforts in praise, accidentally popped the cork out of the bottle. He said he’d seen him training in the Dolomites the previous month in the rain. The problem was that Rasmussen had said he was in Mexico to the anti-doping authorities. The story then snowballed over a few days. and the stage win on the Aubisque seemed to be the final straw. He was withdrawn from the race on orders from the team sponsor Rabobank.

Cue various protests, admissions, denials and then further admissions from Rasmussen. He was dismissed from the Rabobank team and given a 2-year ban from the sport. On the verge of his greatest win, Rasmussen never again reached the top-levels of cycling as teams wouldn’t touch him.

He joined Continental level team Miche in 2010, once his ban had expired. The next year he became a headline signing for new Danish Continental team Christina Watches. He rode for them until 2013. There was the odd result of note in this period. Like winning the Ringerike GP in 2012 and 4th Overall in the 2011 Tour of Norway. But the fall from grace was sharp, sudden and permanent.

After retiring in 2013, Michael Rasmussen fully admitted to doping between 1998 and 2010. The full shopping list of performance-enhancing substances included: EPO, growth hormone, testosterone, DHEA, insulin, IGF-1, cortisone and blood transfusions. 2015 saw Rasmussen back at the Tour de France as a columnist for Ekstrabladet. A role he continues to this day.

Very quietly, Rasmussen also began teaching mountain bike skills to an after school club back home in Denmark in 2017. He’s also been part of property development in Italy. A set of condos will be available for sale later in 2020.