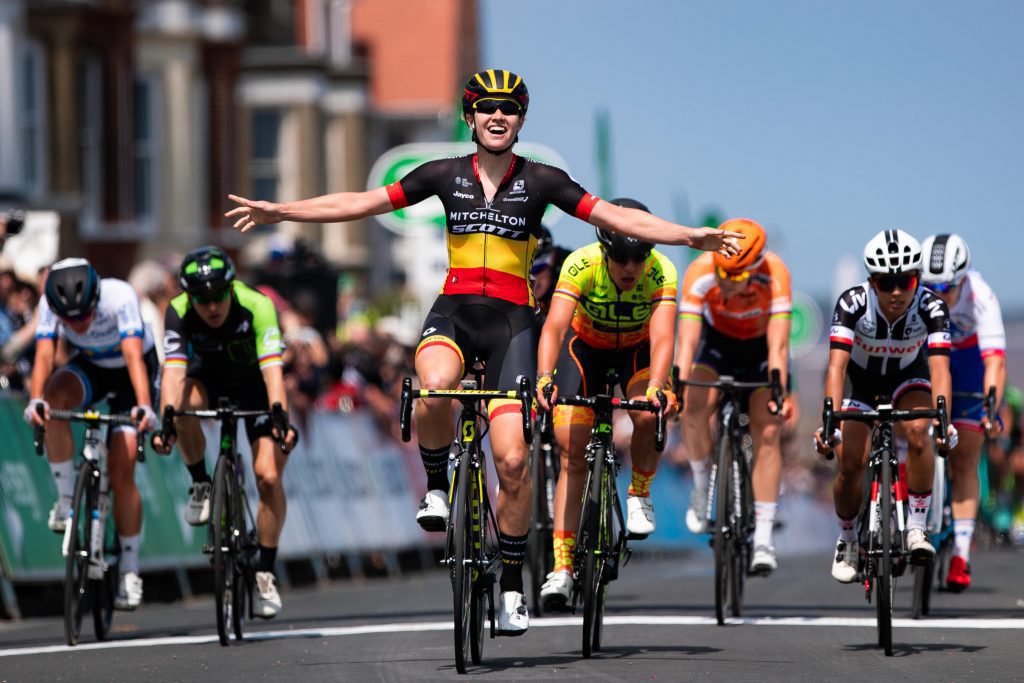 Driedaagse Brugge De Panne, despite the name isn’t a 3 day race. For the women’s peloton it never has been. Since its inception in 2018, the race has seen 3 big bunch sprints. The parcours is super flat with nothing of note to worry about. The wind is about the only hazard for the riders. Even that isn’t forecast to be too bad on Thursday. A 10mph headwind will face the riders but with no rain forecast, shouldn’t cause problems.

Jolien d’Hoore won the inaugural edition of Driedaagse Brugge De Panne in 2018. Mieke Kroger was able to hold off the chasing peloton until just outside 1 km to go. The sprinters ramped up and d’Hoore was able to hold off Chloe Hosking to take the win. The following year, Mitchelton-Scott led the peloton with 3km to go. Trek battled with Ceratizit under the flamme rouge and Kirsten Wild patiently rode the wheels. With clear air ahead of her, she launched the sprint and just held off Lorena Wiebes and Lotte Kopecky.

2020 saw the controversial finish between d’Hoore and Wiebes. Jolien d’Hoore launched her sprint to the right before drift back across to the left and shut the door on a fast-approaching Lorena Wiebes. With the cycling world already nervous as a result of the then-recent Jakobsen/Groenewegen crash at the Tour of Poland, the commissaires relegated d’Hoore. Lotte Kopecky was on the podium again but distanced compared to the front pair.

Team DSM’s Lorena Wiebes should be the big big favourite but still hasn’t opened her account in 2021. She won Driedaagse De Panne last season in a slightly controversial fashion. She crossed the line 2nd to Jolien d’Hoore but the victor was found to have deviated from her straight sprint-line too much. Wiebes was the beneficiary. Her only result of note in 2021 though is 5th at Nokere Koerse and she missed the move at Omloop van de Westhoek last weekend. She needs a break and a good result quickly.

SD Worx continue to win – Majerus took their next victory at Sunday’s Omloop van de Westhoek. Jolien d’Hoore is the obvious favourite for them here. She won Driedaagse de Panne in 2018 and arguably maybe should have won last year’s race too. She’s had a good week, finishing 2nd at GP Oetingen, 6th at Nokere Koerse and 9th at Omloop van de Westhoek. Amy Pieters has never targeted this race particularly but is in such great form at the moment. You can see her attacking at some point. She’s won Nokere Koerse and finished 2nd to Majerus at Omloop van de Westhoek. If anything does happen to d’Hoore then Lonneke Uneken and Elena Cecchini will be able to take over.

Certatizit have their own wealth of options. Normally you’d say 2019 winner Kirsten Wild would be a good shout. After a super quiet 2020 gearing up for the Olympics that didn’t happen, Wild had a quiet Healthy Ageing Tour too. She was the lead-out for teammate Lisa Brennauer on Stage 1. Lisa Brennauer finished 2nd here for Ceratizit last season. So it looks like Brennauer could be the team’s leader. She’s in good form too after finishing 2nd overall at the Healthy Ageing Tour. A further option for the team is the Italian Maria Giulia Confalonieri. She’s been in the top-10 at De Panne before and has a good week. Finishing 6th and 7th at GP Oetingen and Nokere Koerse respectively.

Liv Racing’s Lotte Kopecky continued her good form with 4th at Nokere Koerse. She made the final look easy as she brought the main bunch to the finish. She should do well again here, having finished 3rd in both her previous Driedaagse Brugge De Panne races. She’ll be led out by Alison Jackson whose lead-out for Lorena Wiebes in last year’s edition was so strong that she finished 9th herself. A dark-horse for the team is Valerie Demey who got herself in the break at Omloop van de Westhoek and finished 7th.

Chloe Hosking is the main sprinter for Trek Segafredo. She’s had an up and down 2021 season so far, with her 3rd place at Le Samyn the high point. She was 2nd here in 2018 and this is the sort of flat sprint she has got her best results in. In theory, Amalie Dideriksen is another option for the team. Her best result of the year is 16th at Nokere Koerse, which is her best result in a non-National Championship race since the 2019 Worlds in Yorkshire. With that form, it’s hard to see her finishing high-up this year.

Sarah Roy is probably the best option for Team Bike Exchange. The current Aussie national champion has a 10th place at GP Oetingen in the European part of the season but also a few misses too. She was 4th in 2020’s Driedaagse Brugge De Panne so has a good record previously. Her teammate Arianna Fidanza is a longer shot. She did well by finishing 14th at Nokere Koerse recently.

Movistar’s Emma Norsgaard is the best sprint option on the team. She’s had a great start to the season with her worst result being 11th place at the chaotic spring on Day 1 of the Healthy Ageing Tour. She took 8th at the Nokere Koerse in her most recent race. Alice Barnes had a great few days at the Healthy Ageing Tour as she finished 7th Overall with a 2nd place and 2x 7th places. She’s not replicated since though with 48th at GP Oetingen and 18th at Nokere Koerse. Lisa Klein has been the best rider for Canyon SRAM. She lit it up on the VAMberg, before finishing 12th in Oetingen and a great 3rd in Nokere Koerse. Her best hope here is to help reduce the main group.

Valcar’s Elisa Balsamo won the GP Oetingen to get off the mark in 2021. She followed it up with 12th at Nokere Koerse and a great 7th at Trofeo Alfredo Binda. Balsamo’s starting to show promise as a good all-rounder rather than the out and out sprinter she initially looked like. Her best result at Driedaagse Brugge De Panne is 6th in 2019. Her teammate Chiara Consonni sometimes gets great results as Balsamo’s lead-out. She’s not had any results of note in 2021 so far though.

Marta Bastianelli should be the best option for Ale BTC Ljubljana but may get swamped by the outright sprint specialists. Her best result in 2021 is still 6th place at Omloop het Nieuwsblad, although she nearly matched that with 9th at Nokere Koerse. She can make the top-10, as she did in 2019, but it doesn’t feel like a race for her to win this year. Arlenis Sierra may or may not disappear from the startlist again, as she did for Trofeo Alfredo Binda. She got hit by a car around a week ago and so we may not see her able to repeat her best placing of 9th in 2019’s race.

Drops-Le Col rider Marjolein van ‘t Geloof already has 3 top-10 results in 2021, with a best of 5th at Le Samyn des Dames. She missed the main break at Omloop van de Westhoek but managed to join the trio of SD Worx riders chasing out of the main group. She should improve on her best De Panne result of 40th place. This is Clara Copponi‘s first race of the year for FDJ but is likely their best sprinter. She was 13th in this race last season and had other good results like 7th a Tour de l’Ardèche stage. She’s a bit of a wildcard with no current form to go on.

Then we’ve got the usual pair of young sprinters. Parkhotel Valkenburg’s Amber van der Hulst continues to impress. She was 4th at Omloop van de Westhoek for her best result of the season. Against the top Women’s WorldTour talent, she’ll be happy with a top-10 position but she’s getting closer and closer to a first podium result. NXTG Racing rider Charlotte Kool got off to a good start with 5th at the Healthy Ageing Tour but ended up DNFing the tough VAMberg stage. She’s not raced since either so that 5th is her only non-DNF result of 2021. She should improve on the 27th place she got at last year’s race.

Cyclocross star Ceylin del Carmen Alvarado has never raced a Women’s WorldTour race before. She’s a bit of sprinter dark horse though on the road. She scored 4 top-10 results in the second half of 2020. She was 8th, ahead of Alice Barnes, at the GP d’Isbergues – her best result of 2020. It will be interesting to see how she does on the road. Eugenie Duval is the other option for FDJ. Her best result of the year was on the race track at Assen, finishing 13th and was also 15th at Nokere Koerse. She could prove to be Clara Copponi’s lead-out rider.

Tamara Dronova-Balabolina has got off to a good start to the year in the races over in Turkey. She was 4th in GP Manavgat and 3rd in the GP GP Mediterranean too. She’s never done anything of note in the races outside of Turkey and Russia though so could prove to be a bust. Her DNF at Trofeo Alfredo Binda doesn’t help.

If Marta Bastianelli isn’t on it, then her teammate Maaike Boogaard could step in and do a job. She’s been quietly working so far in 2021, with the best result of 12th at Le Samyn des Dames. She’s getting a reputation as a great domestique and is just missing that big one-day race breakout result. We’re waiting to see the best again from Teniel Campbell on her new team. She finished safely in the peloton at GP Oetingen for 27th place. I’m crossing fingers we see a resurgence of the rider that finished 3rd at the Vuelta Ciclista Valenciana last year.