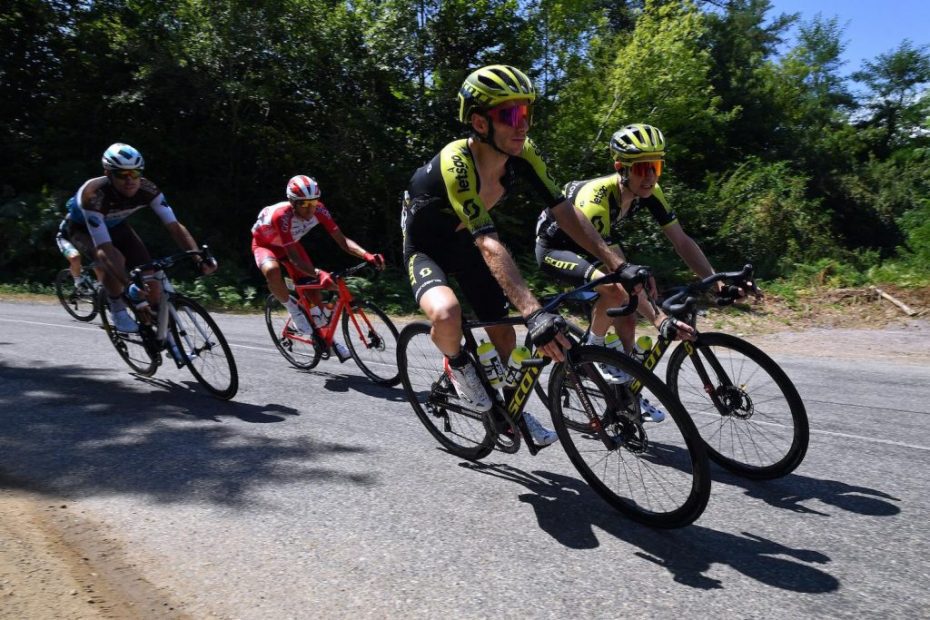 UAE Tour winner Adam Yates was the last man standing for Mitchelton-SCOTT on a punishing day in the mountains on stage two of the Criterium du Dauphine.

The high pace on the final climb eventually proved too much for the Brit in his first race back since February, with the 28-year-old coming home in 23rd place.

Into the Mountains
There was a battle to get into the breakaway in the opening kilometres and eight riders eventually went clear, with the peloton happy with the composition of the escapees. However, they were kept on a tight leash and the bunch only allowed them a maximum gap of 3’30”.

The ascent of the category-one Cote Maillet saw the leash tighten as the gap to the two remaining breakaway riders fell to 1’30”. Birthday boy Damien Howson was then caught up in a crash with 22km to go, with the Czech Tour winner unable to avoid riders going down in front of him.

Final Climb
The pace was ramped up at the head the peloton as several teams began to battle for position ahead of the summit finish, and there was no let up as the Team INEOS led bunch hit the lower slopes.

The final rider from the breakaway was reeled in with 8km to go with Ruta del Sol stage winner Jack Haig and Yates holding onto the rapid pace being set on the climb. However, the speed eventually proved too much for Haig, and the Australian was distanced 5km from the top.

That left Yates as the last remaining rider for Mitchelton-SCOTT, but the former Dauphine runner-up was also gapped and lost contact with the lead group with 4km to go. Primoz Roglic (Team Jumbo-Visma) went onto take the victory, while Yates crossed the line in 23rd, 1’47” behind.

Adam Yates:
“My first race back and straight back into it with the first mountain top finish since coming back for the restart of the season.

“I’m kind of where I expected to be after quite a serious illness a few weeks ago, so all in all I knew I wouldn’t be up there with the best today, but in general all things are moving in the right direction.”

Mat Hayman (Sports Director):
“We knew today that the stage was going to be a GC battle between Jumbo-Visma and INEOS, and that’s exactly how it panned out. The breakaway went up the road and then they just kept turning the screw all day until there was a very select group left at the end.

“It’s Adam’s second day of racing as far as the restart to the season. He’s in a good spot and we’re just building from he towards the Tour de France, so he just tested himself for a bit on the last climb.

“Jack has got goals for a bit further in the season, so it was always our plan here to ride for stages and the race may continue to be fairly controlled, but we’re going to be looking for opportunities in the coming days.”