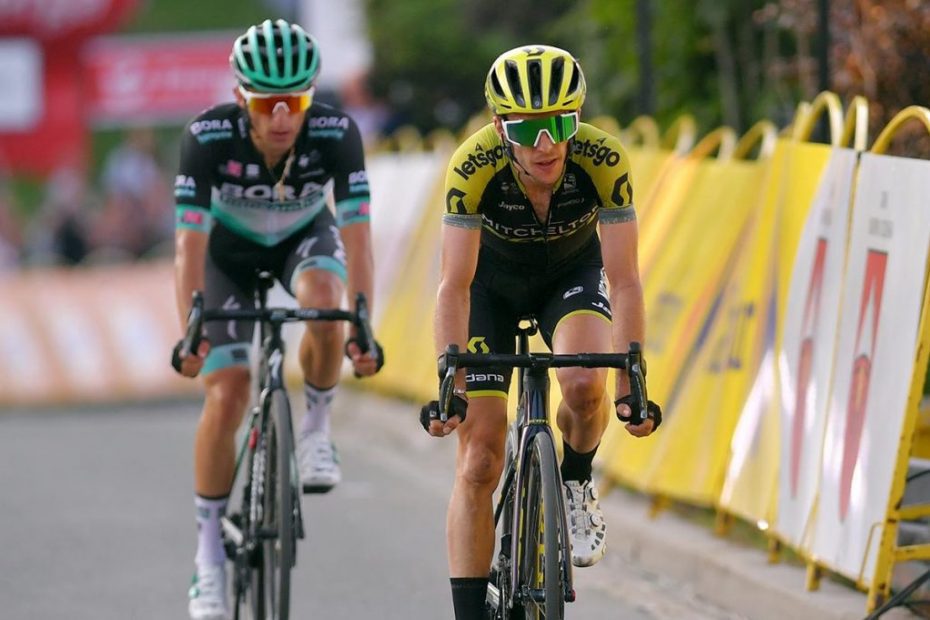 Yates was part of a reduced, and uncooperative, chase behind solo attacker Remco Evenepoel (Deceuninck – Quick Step) who took the stage victory and all-but secure the overall title with a commanding 50km move.

Early action:
Two small attack groups joined together to form the day’s breakaway of five as they worked out to a five-minute advantage.

As the race approached the final 60km, Mitchelton-SCOTT moved to the front and put the pressure on, drastically reducing the deficit and ending the day for the move.

Nothing to match the 50km attack:
Evenepoel made his move shortly after the regrouping, looking for a 50km solo performance to all-but secure yet another stage race.

The response from his rivals was slow, before Team Ineos moved to the front of the severely reduced chase group to try to defend Carapaz’s overall race lead. Mitchelton-SCOTT had Esteban Chaves, Mikel Nieve and Yates, who recovered from an untimely mechanical, still in the mix.

As Team Ineos retreated from shouldering all of the work at the front of the chase, the cooperation ended and attacks began to fly behind Evenepoel, including from Chaves and then Nieve.

It was a move of three featuring Yates, Jakob Fuglsang (Astana Pro Team) and Rafa Majka (BORA – handsgrohe) that had the greatest hope, but even they were no match for Evenepoel who went on for a commanding victory.

Simon Yates:
“We were looking for an aggressive race and I think we did that as a team around 60km from the finish or so, just to whittle down the group a little and put the pressure on Ineos and Carapaz. We did that successfully and it carried on from there.

“I managed to make the move there with Jakob and Rafa Majka to try and catch Remco and that was it, he was just too strong on the day.

“After forcing the selection on the climbs, I had a bit of a mechanical and had to switch bikes at an unfortunate time. It was a big chase, but he was still too strong and chapeau to him.”

Mathew Hayman – Sport Director:
“Coming into today’s stage we still have three of our climbers still on GC so we wanted to try to use those cards on a very tough stage. The guys were ready from the start, we it didnt really eventuate and Ineos had everything under control so it was up to us half way through the stage to try and make things harder.

There was an unfortnuate crash with the yellow jersey but once he was back on we tried to split things up as much as we could, but at the end of the day Remco showed his class and rode away and there was nothing the guys could do about it. Hates off to him and after a very tough week for that team, I’m sure they are very happy with that result.”