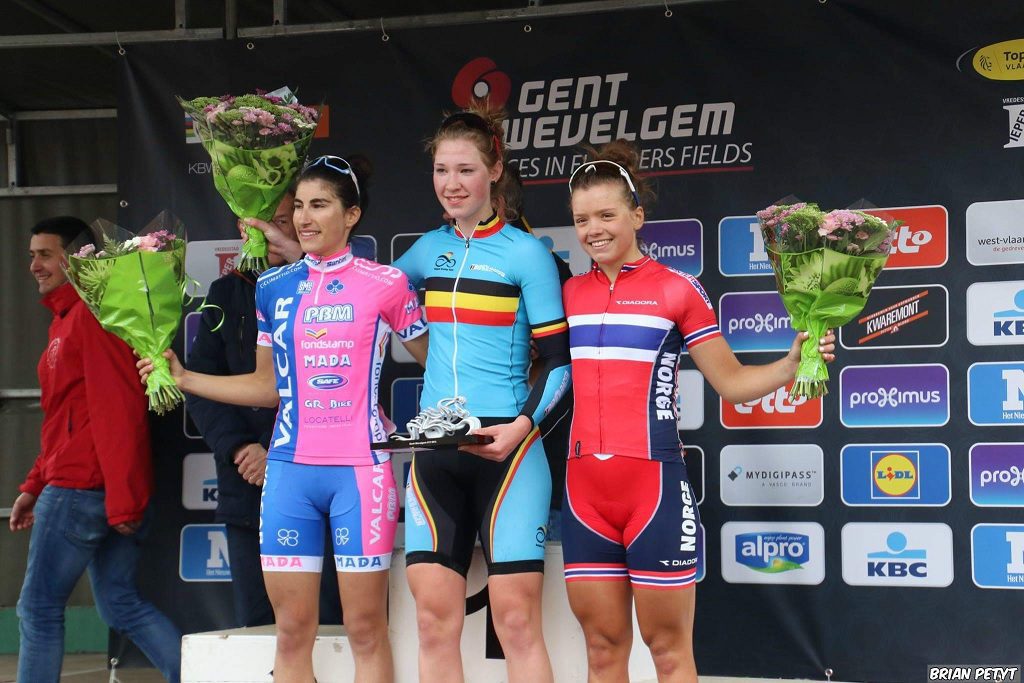 2016 wasn’t that long ago but the world was very different. Pandemics were a history lesson for most and at the time of that year’s Gent Wevelgem, Britain hadn’t voted for Brexit yet. The cycling world was very different too. It’s tough now to imagine a WorldTour peloton without Wout van Aert and Mathieu van der Poel but back then they’d only taken 1 road victory between them. Tom Dumoulin had announced himself as a GT rider in the previous year’s Vuelta and Fabio Aru took his only GT win too. Fast-forwarding to 2021 and both riders have had ups and downs since.

In the women’s peloton, 2016 was the first season of the Women’s WorldTour. It expanded on the previous season-long World Cup with 4 extra races. Lizzie Armitstead (as was) took the early running before Megan Guarnier took over the lead at the Tour of California. Guarnier held the overall lead to the end of the season. Armitstead had won the two previous editions of the World Cup as the era of absolute Marianne Vos dominance was over. Vos had spent the 2015 season not racing after a series of injuries. Other riders began to make a step up, like Chantal Blaak, who won Gent Wevelgem in 2016.

This brings us nicely to the 2016 Gent Wevelgem Juniors race. All the riders in the peloton that year were born in 1998 and 1999 and with 5 years of hindsight, the line-up was stacked!

The race was won by Nathalie Bex of Belgium. There hasn’t been another home winner since 2016’s race. She took the victory with a late attack that was planned in tandem with Lynn Marien. Bex felt confident of her chances in the sprint but the Belgian coach told Bex to attack. If Bex is brought back, Marien would then counter-attack and Bex could sprint. With 9km to go, Bex gets a gap with her attack into the wind heading back to Ypres. Balsamo tries to bridge but can’t and the gap holds just under 10 seconds. The 20 or so riders still in the peloton can’t close the gap and with a couple of kilometres to go, start thinking about their own chances in the sprint. Bex wins by 11 seconds from Elisa Balsamo and Susanne Andersen. Lorena Wiebes wins the main bunch sprint to finish 19th, nearly 5 minutes behind Bex.

Who’s who of 2016 Gent Wevelgem Juniors

Nathalie Bex won this race and won a Healthy Ageing Juniors stage a couple of weeks later. She confirmed her promise by doing the double at the Belgian National Champs. That saw her snapped up by the Sport Vlaanderen team for 2017 where she got her first taste of WorldTour racing. The team changed its name to Experza in 2018 and that season Bex began to suffer from overtraining. A move down a level to Rogelli-Gyproc for 2019 didn’t help and only by moving to Chevalmeire in 2020 has Bex felt back to her best. There’s still a chance we see Nathalie Bex properly break out.

Elisa Balsamo missed out at Gent Wevelgem but went on to win the Junior World Championship in Doha that season. She’s been a member of Valcar since 2016 and is part of the host of young Italian talent on their roster. Balsamo’s taken 9 wins and 2 Women’s WorldTour wins – at the 2019 Tour of California and 2020 Ceratizit Challenge. She’s now one of the biggest sprinters in the women’s peloton.

Susanne Andersen was already on a UCI team by Gent Wevelgem – Hitec Products. By the end of 2016, Andersen was sprinting against some of the biggest names in the peloton. In her home World Championships the following year, she beat Van der Breggen and finished 7th. A bright future looked on the cards but a quiet 2018 saw Andersen move to Sunweb for 2019. The results started to return but the 2020 COVID season saw only 1 top-10 result. With Wiebes joining the team, opportunities became fewer and fewer and Andersen’s best results came in non-WWT races. Somehow, she’s not won a race since leaving the junior peloton despite coming close many times!

Clara Copponi won the previous race to Gent Wevelgem in 2016 at Trofeo Alfredo Binda. She stayed in the junior peloton for another season before joining FDJ mid-way through 2018. She’s mixed the track with the road and despite coming close several times, is yet to win on track or road since turning Elite. It should surely only be a matter of time.

Maaike Boogaard joined BTC City Ljubljana the following season and has carved out a domestique role with them. She won the Dutch juniors TT and that sustained power has seen Boogaard used in lead-outs and break killing jobs for the team. On rare occasions, she’s also sprinted to decent results too. Her best result since turning pro is the 8th in GC at last year’s Ceratizit Challenge. A great TT and 2 days of consistent racing showed her all-around ability.

Marta Cavalli is starting to turn into one of the stars of the women’s peloton. She’s taken a pair of pro wins – her national championship in 2018 and Giro Delle Marche in 2019. She was with Balsamo at Valcar until this season, when she switched to FDJ. It’s helped her push on a level and Cavalli now consistently finishes in the top-10 of WWT races. Her 6th in GC at this year’s Giro Donne was particularly impressive.

Anne de Ruiter appears to have dropped out of cycling after a 2019 season with Parkhotel Valkenburg. She won a Healthy Ageing Juniors stage a few weeks after this Gent Wevelgem and was 2nd in GC too. She achieved similar results in her last year as a junior in 2017 but found the 2018 season to be tough. Her best result was 27th that year. Unknown to most in 2018, she was beginning to suffer from an eating disorder. She stayed on the team’s roster for 2019 but didn’t race as she began to recover. She studies nursing and probably won’t be racing again.

Kylie Watterreus took a little bit longer than some others on this list to join a UCI Continental team. After racing for one of the best Dutch domestic teams in Jan van Arckel, she joined HealthMate in 2019. Unfortunately, that turned out to be the team’s last year after the owner was suspended. Waterreus joined Multum Accountants in 2020 and is still there in 2021. Her best pro result is 2nd at GP Eco-Struct.

Amber van der Hulst nearly won this race the following year, finishing 2nd to Pfeiffer Georgi’s solo break. She raced for SwaboLadies in 2018 and had a promising 2019 with the Jan van Arckel team. Moving to Parkhotel Valkenburg for 2020 saw her take a new best result of 4th at GP Eco-Struct. 2021 has been a breakout season, whilst a first win is still to be ticked off, Van der Hulst is now a regular in the upper part of the top 10.

Karlijn Swinkels finished almost every race in 2016 inside the top-10 and won the TT at the World Champs too. That saw her snapped up by Parkhotel Valkenburg for 2017 where she had a decent season. Ale Cipollini saw her potential and Swinkels spent two years with them. She took her first win in 2019 at the Vuelta a Burgos. She returned to Parkhotel Valkenburg for 2020 and reaffirmed her ability as someone who can time trial and sprint. It was no surprise that the new Jumbo Visma team came in for her in 2021 and the highlight of the season has been 4th in GC at Festival Elsy Jacobs.

Other riders of note

Ingvild Gaskjenn has been on the Hitec Products team since 2017 as one of the best recent Norwegian talents. She came to wider attention in 2019 with 3rd in GC at Kreiz Breizh Elites. The 2020 season put a hold to some of the progress because of COVID but Gaskjenn has had a breakout year in 2021. She’s now scoring decent results at higher level races.

Nicole Steigenga is another here to be signed by Parkhotel Valkenburg but she had to drop down a level to SwaboLadies in 2018 before jumping back up with 2 years at BePink in 2018 and 2019. She’s spent the last two years at Dolctini. She’s taken wins at the 2018 Setmana Ciclista Valenciana and 2020 Dubai Women’s Tour. You’re most likely to see her in the break or making strong but doomed attacks from the peloton.

Lorena Wiebes has become the strongest sprinter in the women’s peloton and the most successful rider from this race. At 22, Wiebes already has 33 wins, with 10 of them at the Women’s WorldTour level. She spent an extra year racing Juniors with SwaboLadies in 2017 and took major wins at Trofeo Alfredo Binda and the European Championship. Parkhotel Valkenburg snapped her up for 2018 and she took 4 wins at .1 and .2 level races. 2019 was her breakout year with 15 wins, including Nokere Koerse, a clean sweep at the Tour of Chongming Island (and GC), Dutch national champion and more! Now at Sunweb/Team DSM, she’s a huge star and just needs the right parcours to be a World Champion.

Arianna Pruisscher has had a slower progression than Wiebes. She had to spend her first season out of juniors at WV Zeeuws Vlaanderen before getting picked up by Jos Feron Lady Force, one of the better domestic teams in the Netherlands. Then she moved to MEXX-Watersley, another top domestic team in 2019 before moving to Belgian S-Bikes Bodhi in 2020 and 2021. She finally made it to a UCI Continental team with Stade Rochelais in mid-2021. She might’ve been picked up earlier after finishing 2nd in GP Eco-Struct in 2019. However, after a 2020 season where she didn’t race, Pruisscher made people take notice at the start of 2021. Hopefully, she will continue to kick on.

Chiara Consonni has had a similar path to Elisa Balsamo – joining Valcar and also doing a lot of track racing. She’s been slightly in Balsamo’s shadow, often being a lead-out and getting opportunities when Balsamo isn’t racing. She took her first WWT win at the Boels Ladies Tour in 2019 but had to wait until this season for more victories. She won at the Ronde de Mouscron and Vuelta CV Feminas in 2021. She’s a good sprinter who just needs more chances to push onto the next level now.

Laura Asencio spent two years on French domestic teams before being picked up by WNT Rotor in 2019. Behind a clear leader in Kirsten Wild, she’s done well when she’s had a chance – like 5th in Vuelta CV Feminas in 2020. Her one victory as a pro as been in the U23 French National Champs last year. She has just taken her best result of 2021 with 3rd in La Picto-Charentaise. It feels there’s more to come from her yet as she continues to develop.

Ceylin del Carmen Alvarado has been fairly quiet on the road since her junior years. She’s raced with Kleur Op Maat in 2017 and Restore in 2018 & 2019. With the introduction of the cyclocross rider based Ciclismo Mundial team in 2020, Alvarado has begun to do more road racing, including a top 10 at GP Eco-Struct. That team became Plantur-Pura in 2021. It’s cyclocross where Alvarado has had a huge impact – winning the 2020 World Championships. As one of the very few non-white star riders of the cycling world, her success is an important moment in cycling’s journey.