After an exciting three rounds of fast and furious town centre circuit racing CAMS-Basso were crowned the winners of the Tour Series 2021.

As defending champions going into the series, all eyes were on the team which comprised Megan Barker, Jessica Finney, Katie Scott, Emma Edwards, and new stagiaire, Sophie Thackray. 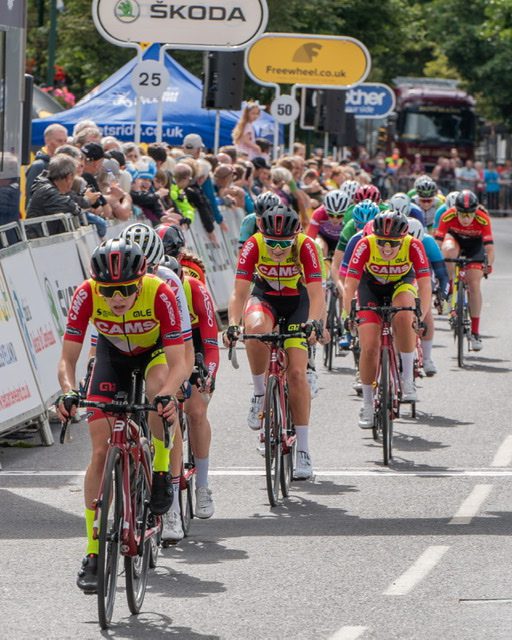 With more women’s teams taking part this year than men’s teams, there were strong fields at each race in the series. After missing the break in the first round in Guisborough and having to settle for a top place of 7th, the team stepped up in Sunderland where nothing was allowed to get away.

Coming into the closing laps, the team rode with purpose, helping to set up Meg for the win, and all five riders placing in the main bunch. Winning the team competition on the night set up a nail biting competition in Castle Douglas with just one point separating us from our closest rivals.

Despite rain and strong winds, the crowds came out to line the streets of the pretty Scottish town to create an awesome atmosphere for the final round of the series. On another technical circuit, nothing was getting away, but the main bunch whittled down each lap as the pressure was applied on the front. 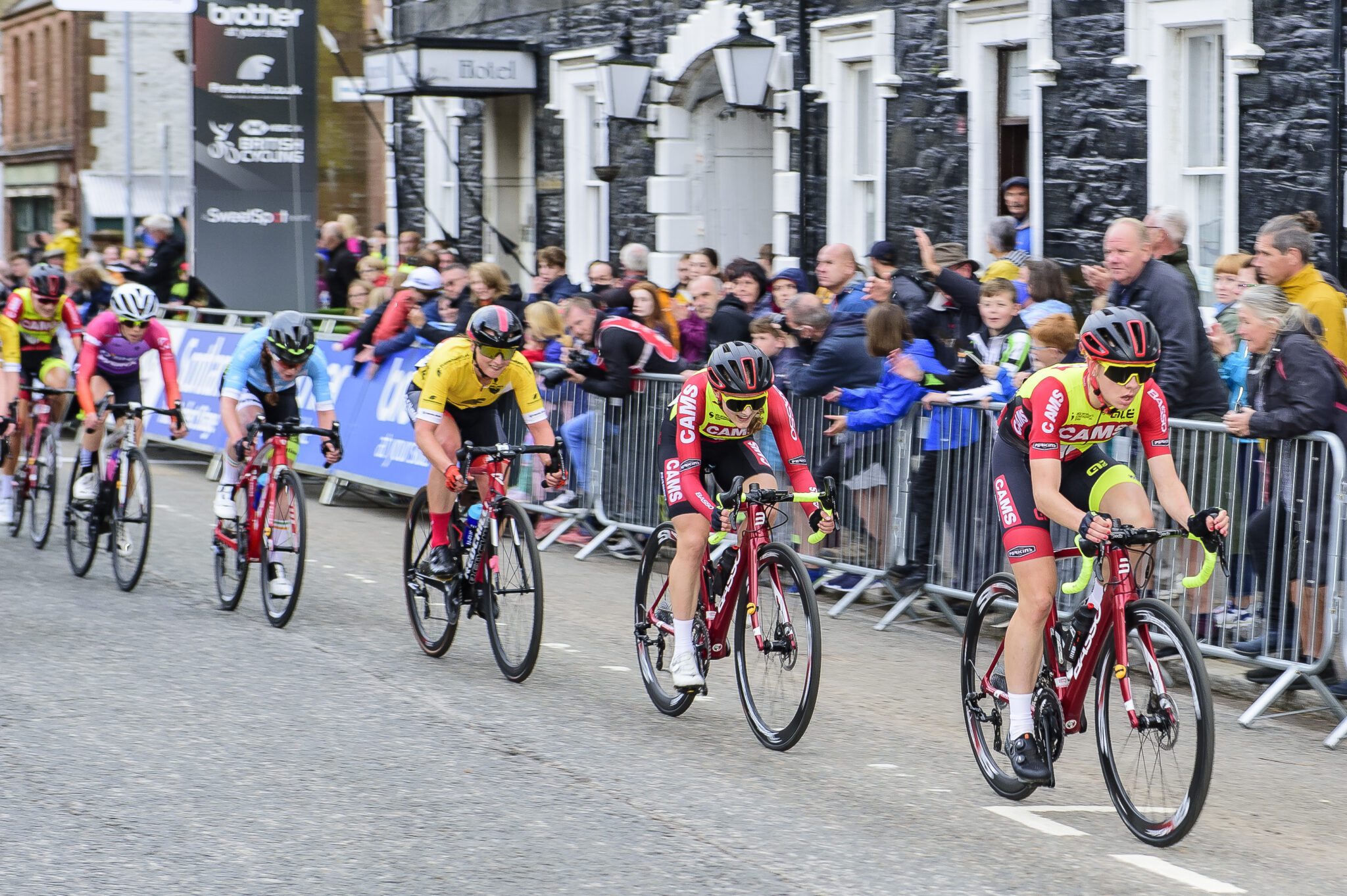 Our distinctive bright yellow and red jerseys were constantly visible at the front of the race, as they were in all rounds of the series. In the final laps Jess Finney took to the front to keep the pace high and further reduce the peloton.

Meg Barker hit the front during the last lap and was able to hold off Jo Tindley from Pro-Noctis – Redchilli Bikes in the sprint to the line to take her second victory of the series, with Jess finishing third. Sophie was held up behind a crash just three corners from the finish. Thankfully she stayed upright and was quickly chasing back to finish 12th as our third rider and final counter in the team competition.

It was then a tense few minutes whilst the points were calculated before we were announced as team winners on the night, our two victories in the series giving us the win in the overall team competition. 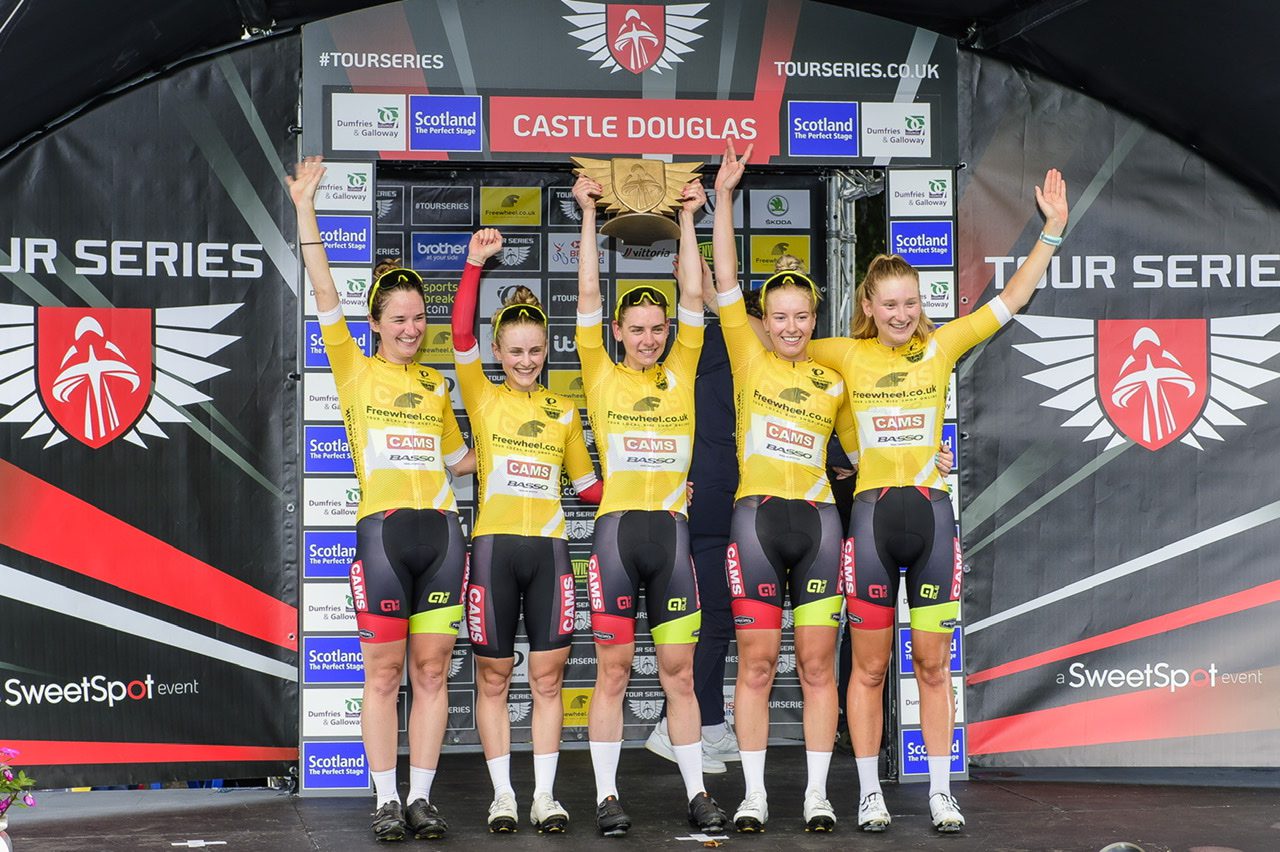 It was a tense race from the sidelines for Simon Howes, Team Manager commented, “I’m so proud of how the girls came together as a team and continued to improve throughout the series. They gave it everything and it’s so good to see them rewarded with the overall team victory.

“Each rider had their goals for the Castle Douglas race and they executed to perfection. Jess’s performance in my opinion was the ride of the series. She was rarely out the top four throughout the race, then pulling on the front for the final three laps to lead out Meg for the win was just outstanding. 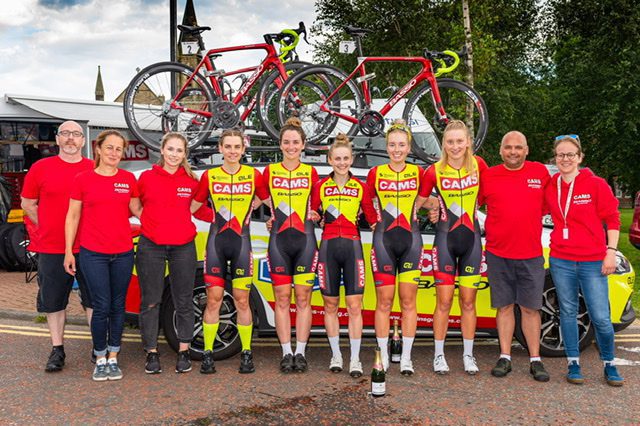 “The camaraderie on and off the bike with this group, and all the staff, makes the team something special to be part of. We couldn’t do this without the support of everyone in the wider team and our fantastic sponsors, so this victory is also for them.”

As this year’s Tour Series draws to a close, we hope you all enjoyed watching it as much as we enjoyed racing it. We can’t wait to go again next year!

If you weren’t able to see the races live, highlights from all rounds of the competition are on the ITV Hub so check them out.