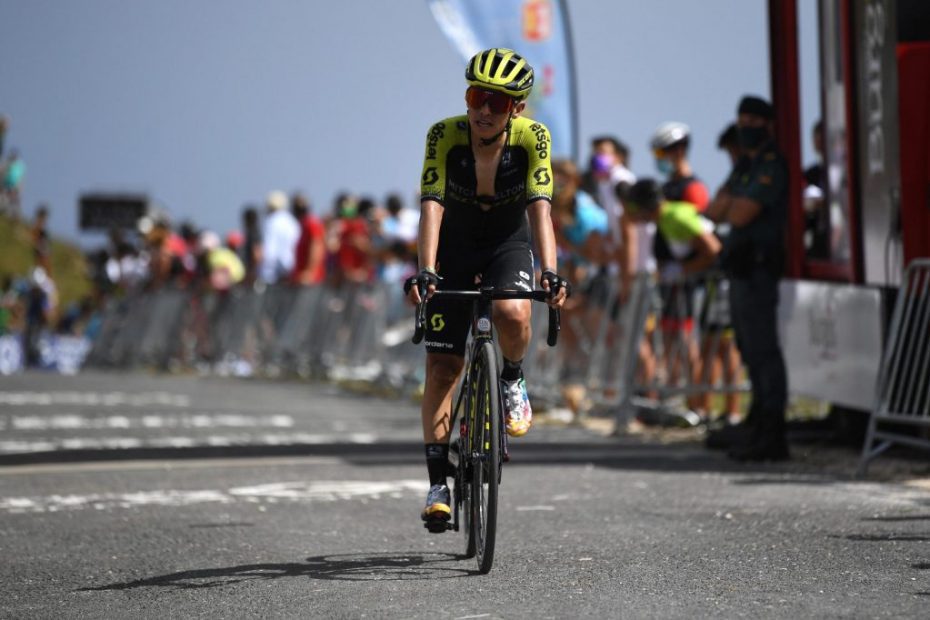 After kilometres of constant attacks on the final 7.8kilometre ascent, the winning move finally came from Remco Evenepoel (Deceuninck-Quickstep) with just under two-kilometres to go. The youngster left Chaves and George Bennett (Jumbo-Visma) behind and powered to the stage victory and into the overall race lead.

Chaves now sits in fourth place on the general classification at 35seconds with two stages remaining.

Nine lead the way
Like the previous two stages, a breakaway established itself in the opening kilometres of the stage, this time it was a larger group consisting of nine riders.

The leaders rode out to a maximum advantage of nine-minutes before their time gap slowly reduced down to under five-minutes as they entered the final 50kilometres.

Wind plays havoc
With all eyes on the final climb, the summit finish in Picón Blanco, riders were suddenly caught off guard when a crosswind section blew the peloton apart. Teams fought to get back into contention and after many raised heartrates, the peloton finally regrouped around the 35kilometre to go mark.

One goes solo
One-by-one riders trailed off the back of the bunch after the fierce effort in the crosswinds and as the roads became wearing as they headed over the penultimate climb.

The chasing peloton significantly reduced in size and the nine leaders lost even more time. Roger Adria (Kern Pharma) attacked away from the breakaway and led the race solo, only to be caught with less than three-kilometres to go.

Climbers play the game
Before Adria was caught it was Mitchelton-SCOTT who headed the chase with Jack Haig and Mikel Nieve shouldering the work, causing the chasing group to reduce in size. Simon Yates accelerated with four-kilometres to go which shelled even more riders and eventually it was time for Chaves.

Chaves attacked and attacked again, eventually getting away with Evenepoel and Bennett with other key players close behind. Ahead of the exposed final kilometre, Evenepoel attacked at a good moment following the multiple attacks, to win the stage by 18seconds.

In the closing metres Landa gained ground and passed Chaves just before the line to leap-frog the Colombian in the general classification.

Esteban Chaves – 4th place
“It was an awesome test for everyone. The team did a really awesome job today, we raced like one unit and at the end we attacked from four kilometres to the finish line.

“At the start it was a question mark for everyone in the peloton about how it would be, but now everything is clearer and for Saturday’s final stage it will be different how everyone approaches the final climb.

“We are happy, as even in the crosswinds, we rode together like a real team and everybody did an awesome job.

“The final was hard, it is a really hard climb, we tried but in the end I finished fourth. There still two more days to come and it is a good start for this Europe season.”

Matt White – Head Sport Director
“It was a really tough day with temperatures reaching 40degrees, then a big storm came in with no rain but very strong winds and that’s what split the group and that caused a lot of stress before the final climb.

“We’d spoken this morning and if Esteban felt good then we were going to support him, so the boys rode a really good tempo to finish off the breakaway.

“Overall today there were really good signs from our four climbers in their first race back, but of course especially Esteban today.

“Realistically Remco is going to be very hard to beat but if we can move up one place onto the podium that would be a very good result and Esteban is very familiar with that final climb on the last day.”