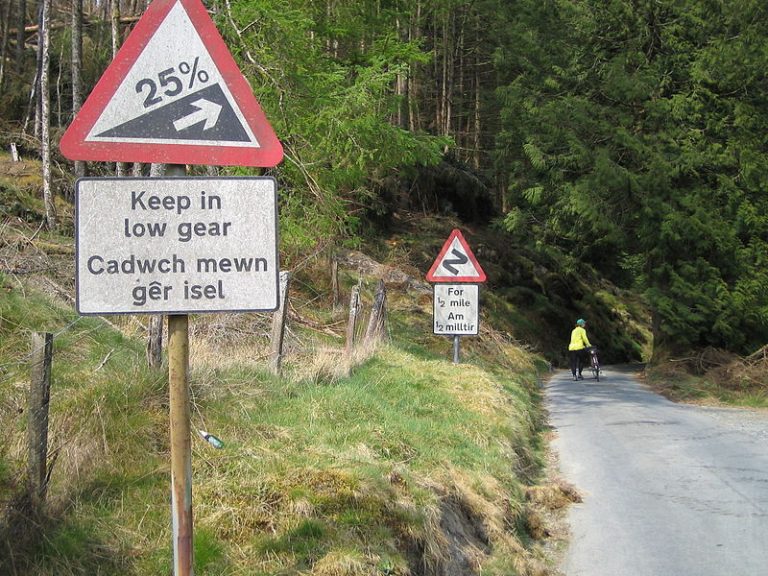 The Devil’s Staircase hill climb lies between the village of Abergwesyn and Tregaron in mid-Wales. Crossing the Cambrian Mountains, the Devils Staircase forms part of the much longer Abergwesyn Pass. The full pass is 14 miles long and is a spectacular mix of wilderness, mountains and steep climbs. It’s not a surprise that the Devil’s Staircase Wales finds itself in the 100 Greatest Cycling Climbs book along with the Tough of Bowland.

The max gradient of 25% puts this climb into the upper echelons of toughness. There’s just a handful similar in the UK, let alone Wales. The Greatest Cycling Climbs book gives it a difficulty rating of 9 out of 10 – it’s a beast!

The Devil’s Staircase comes in the first half of the pass. To get there you have to do the initial climb out of Abergwesyn village. Not the worst climb but a stiff warm-up nonetheless. After meandering along the side of the valley, you come to a lovely flat area. Two small bridges cross over the same river just before the climb. They can be submerged by the seemingly small stream below after heavy rainfall.

There’s a little sort of pre-hit immediately before the 100 Greatest Climb version of the climb starts but once it flattens ever so slightly, the real stuff starts. It doesn’t take long to get up to 19% and more heading into the first bend. Rounding that the climb doesn’t appear to get any easier with the high double-digit gradient still taking its toll on your legs.

The trees and seemingly ever-present fog amongst them gives this part of the climb an eerie feel. On my definitely over-geared bike, I was struggling massively once I rounded the second bend. The ever-efficient zig-zag mode was engaged just to be able to continue to turn the lowest gear I had.

After around 600 metres of the climb, there is the merest hint of it beginning to ease. The brutal gradients begin to ease down to 10% for the first time. The next 0.5km sees a tough finish of around 7-8% and then the hard work is over!