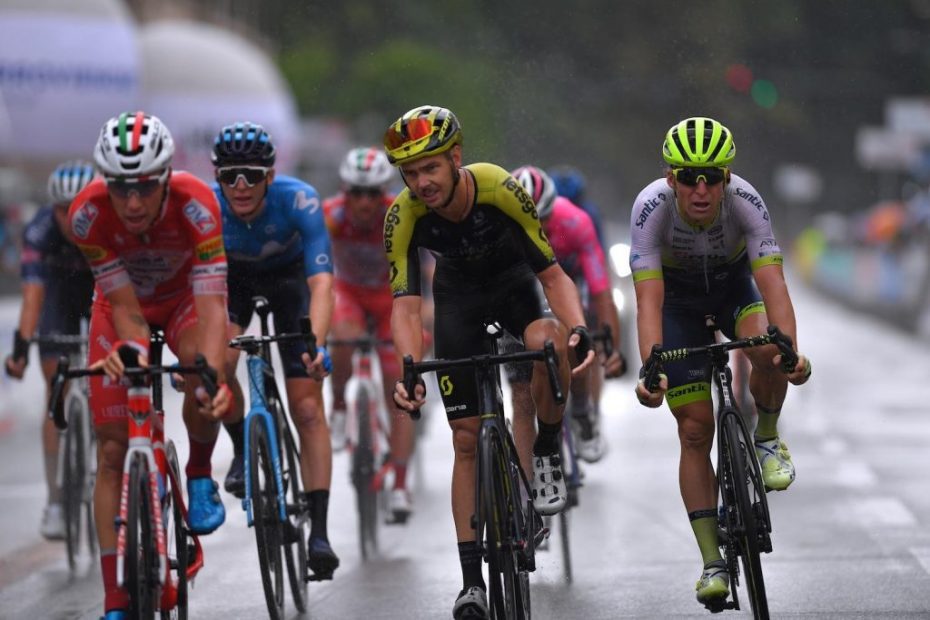 Kiwi Dion Smith was Mitchelton-SCOTT’s top finisher on a tough day of racing in miserable conditions at the Gran Trittico Lombardo in Italy.

The 27-year-old crossed the line 16th, a handful of seconds behind a select group of favourites, who in turn finished 27seconds back on solo winner Gorka Izagirre (Astana Pro Team).

Routine Start
It was a routine start to the day as five riders headed down the road to form the breakaway. The bunch were content to allow the escapees an advantage of over 10minutes before holding them at what they deemed to be a manageable time gap.

Heavy rain then began to fall, making for a nervous bunch that resulted in several crashes on the slippery Italian roads. The time gap started to fall as the race passed over the Piccolo Stelvio and it was below six-minutes as the five leaders made it onto the finishing circuit in Varese.

Final Circuits
As the escapees headed onto the penultimate lap the difference was just two-minutes as the race burst into life on the Montello climb. An increase in pace saw the bunch reduced significantly, leaving around 40riders left behind the breakaway.

Attacks quickly followed, and a select group of 10riders bridged across to the remains of the break, with a small chase group containing Smith and young Australian Rob Stannard a not far behind.

However, with a lack of cooperation amongst the chasers, they were unable to catch the select group up the road where Izagirre attacked solo to take the win. Smith was left to battle for the minor places, eventually crossing the line 16th in his first race back since the enforced break.

Dion Smith:
“It was a pretty tough first race back, especially with the conditions. I’ve never actually ridden in so much rain. There was a little bit of flooding on the roads and at some points it was borderline pretty dangerous. But we managed to get through mostly unscathed, apart from I had a little crash in the first 50kilometres.

“I was in a bit of group behind those 10 guys that got away with a lap and a half to go, I just didn’t really have the legs to follow that group. I just kind of hid a little bit and tried to conserve as much energy as possible to try and get the best result I could.

“I think everyone was pretty much on the same level in that group; pretty wrecked and couldn’t attack. Then we just came across the line together for the sprint and I was pretty done to be honest.

“I’m happy, after such a long time it’s hard to know how it’s going to be, but it can only get better from here, I think. So overall I’m pretty happy and now I know where I’m at, not too far off the pace and after a couple of races in the legs I should be a bit better.”

Gene Bates (Sports Director):
“You couldn’t get more extreme conditions from Strade Bianche to today, we had a lot of water for pretty much the entire last half of the race.

“It was quite a predictable race in the end, the break went and they still a large amount of time when they got to the finishing circuits and it was a real race of attrition at that point. Trek-Segafredo did a lot of work to try and set Nibali up, and that was what caused all the damage.

“Unfortunately, we just weren’t quite good enough to have someone in that front group of 10, we had Dion in the chasing group behind with Rob. The guys did everything they could, they just didn’t have the legs to finish it off there.

“But for some of these guys this is there first race back after five months out, which we can’t forget. So, if you look at it from that perspective, it was a good start and something to really build on for the next races.”