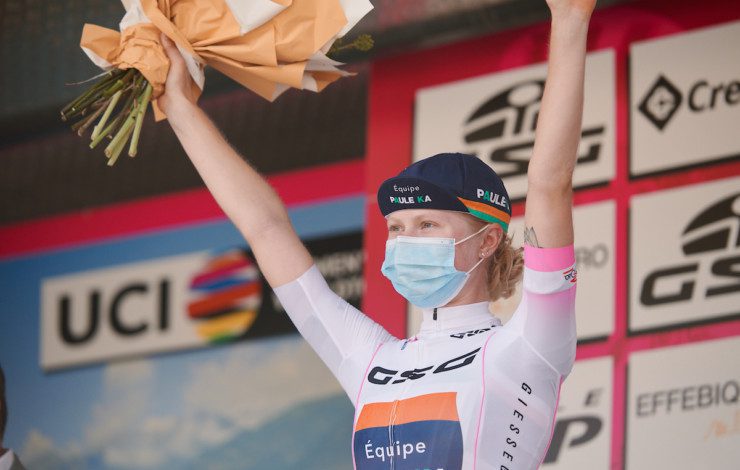 The original course of Stage 6 was changed slightly due to a bridge collapse. The riders left Torre del Greco at the foot of Mt Vesuvius to cover 97.5km, before hitting the finish line in Nola. The terrain looked like it would be suited to the sprinters, but the course was not to be underestimated, with a 3rd category climb in Sarno having to be contested as well as a complicated passage to Monteforte Irpino, which was followed by a fast run-in to the finish town. The race was marked by a flurry of attacks right from the start, however the escapees were brought back by a fast-chasing field. After the race had calmed down for a period mid-race, several riders set out to attack, but again to no avail. In the end, the finale came down to a sprint which was taken out by Marianne Vos. Elise Chabbey finished with the main field to take 13th place. while Mikayla Harvey was able to defend her fifth position in the general classification. Équipe Paule Ka currently tops the leaderboard in the team classification, 1:18 ahead of the second-placed squad, and 8:04 in advance of the third-placed team.

Team Owner Thomas Campana commented after the stage: “Today we worked for our best-positioned GC rider Mikayla. We were looking for opportunities to launch Marlen into a breakaway, but it was a short and fast stage and so it was much harder than expected. We had a tough last 40km, but the team defended the positions they held when they started the stage. We continue to be the best-placed squad in the team classification, have two riders in the top 10, with Lizzy also in 11th place overall, and Mikyala in the white jersey. Tomorrow we’ll start the last three stages with significant climbing and so we’ll see what we can do there. I am happy that the team is in good form, and nobody is too tired after the previous stages. Elise was involved in some crashes, but she is a tough rider and I am confident she can defend her tenth position in GC.“