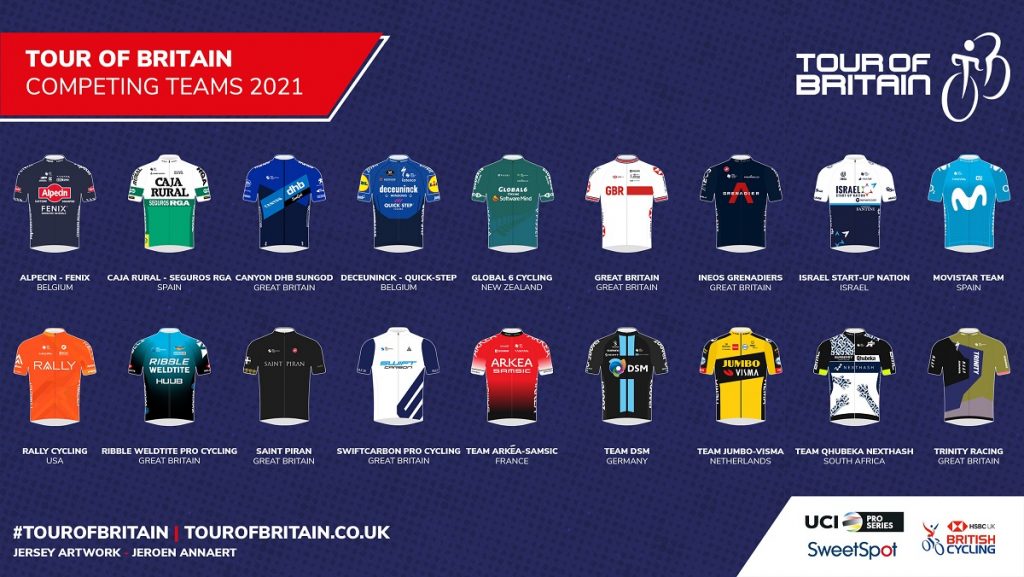 All five of Britain’s UCI Continental teams and a Great Britain national squad have today been unveiled as the first confirmed teams for this year’s Tour of Britain (5-12 September).

Canyon dhb SunGod and SwiftCarbon Pro Cycling will return to the UK’s most prestigious race having previously won jerseys in the event, while Ribble Weldtite Pro Cycling, Saint Piran and TRINITY Racing will make their Tour debuts in September.

Tour of Britain organiser SweetSpot and British Cycling have issued invites to all five of Britain’s UCI Continental teams for the 2021 race in recognition of the challenges posed and the lack of racing opportunities since last March owing to the COVID-19 pandemic, as well as a desire to assist them with current and future commercial partnerships in a challenging economic climate.

Their participation will mark the most home teams in the race since the 2015 Tour of Britain, when six British UCI Continental teams competed. Owing to the unprecedented demand from UCI World and ProTeams to compete in the event over the past decade, SweetSpot and British Cycling introduced a season-long qualifying process in 2016 to reward those teams who both supported and performed the best in the leading domestic races. The selection criteria for UCI Continental teams will be re-introduced for the 2022 Tour of Britain, and SweetSpot and British Cycling will work with teams to confirm the process in Autumn 2021.

The Great Britain Cycling Team – who have ridden 13 of the 16 modern Tours to date, including every edition since 2012 – complete today’s team announcement. Their involvement allows future stars to gain invaluable experience in one of the world’s leading races. Among those who have lined up in the race in home colours are reigning Giro d’Italia champion Tao Geoghegan Hart, 2018 Vuelta a Espana victor Simon Yates and Grand Tour stage winner Hugh Carthy.

Details of the UCI World and Pro Teams competing in the Tour of Britain will be announced in the summer.

Mick Bennett, Tour of Britain race director, said: “We’re delighted to be announcing the first six teams competing in the long-awaited 2021 Tour of Britain. Together with British Cycling, we understand the challenges that they have faced over the past 14 months. We hope that these early invitations give them the chance to plan ahead to September, safe in the knowledge that their place is assured, so that they can arrive at the Tour of Britain in the best possible condition. We know from recent editions of the race that the Great British squad and domestic teams can illuminate the race – I’m looking forward to more of the same later this year!”

Stephen Park, Performance Director at the Great Britain Cycling Team said: “The Tour of Britain always presents our young riders with a fantastic opportunity to go shoulder to shoulder with the world’s best teams and riders, and I know that the experience was invaluable for the development of the likes of Ethan Hayter, Matt Walls and Fred Wright, who have all since gone on to make their mark on the UCI WorldTour. Having all five of Britain’s UCI Continental teams in the race is great news for the domestic sport and the fans watching from the roadside too, and the Great Britain Cycling Team squad can’t wait to join them on the start line in September.”

Tim Elverson, Canyon dhb SunGod team owner, said: “It’s great for British sport to have the Tour of Britain back after a difficult period of time. It’s going to be the biggest race for nearly two years so it’s fantastic to be getting out there, in a race we have had great success in, having won jerseys in 2018 and 2019. We have been working hard to keep the European racing going since the 2019 Tour of Britain, so I am optimistic we will be able to step up and fight with the UCI World Teams once again to make the 2021 Tour of Britain another huge success.”

Tom Timothy, Ribble Weldtite Pro Cycling team principal, said: “Ribble Weldtite Pro Cycling are a British team sponsored by innovative British brands. As such we’re excited to be competing in our first Tour of Britain, particularly with our strong rider line-up including multiple national champions and seasoned professionals. With the route featuring stages including many of our riders’ home training routes, we will be looking to put on a show and animate this great race.”

Ricci Pascoe, Saint Piran team principal, said: “Saint Piran are delighted to be participating in the 2021 Tour of Britain. For the team, this represents the realisation of a dream, and the fact that the first stage of this year’s race takes place in our home county is the icing on the cake. This will be the largest sporting event ever in Cornwall and we believe it will create a huge legacy for cycling here. We can’t wait to be on the start line in September in Penzance and we look forward to mixing it with some of the best riders in the world.”

Carolyn Nelson, SwiftCarbon Pro Cycling team principal, said: “The last year has been challenging for everyone – fans, supporters, sponsors and teams – and we are delighted to be part of a celebration of cycling across Britain in September.  We are really looking forward to returning to the Tour of Britain and will be keen to defend the King of the Mountains jersey we won in the last running of the race in 2019.  We also hope to see Pete Williams – a former winner of both the sprints jersey and mountains jersey – complete his twelfth Tour of Britain, which would be a record for any rider, as well as seeing a number of our squad racing on home roads along the route from Cornwall to Aberdeen.”

Ian Stannard, TRINITY Racing directeur sportif, said: “I am really excited to be bringing the team to the Tour of Britain in my first year as TRINITY Racing DS. Having ridden nine editions and winning two stages of the race, I am really looking forward to passing on my knowledge to our group of young aspiring riders in the hope we can bring the challenge to the larger teams and, who knows, even win a stage or go for the GC. We have a really talented group who I believe in, so we will go to the race with big ambitions. We are very grateful to SweetSpot for inviting all of the UK’s UCI Continental teams; working at that level I can see the struggle every Conti team has just to keep moving forward, so competing in marquee events like this with the support of SweetSpot really makes a big difference.”

Saint Piran’s invitation to the Tour will see Cornwall’s first-ever international cycling team compete on home roads when the race starts in the Duchy with a stage between Penzance and Bodmin on Sunday 5 September.

Riders potentially racing home stages include Ribble Weldtite’s Freddie Scheske and Max Stedman (Canyon dhb SunGod): the former is studying in Exeter, where the race’s Devon stage (Monday 6 September) finishes, while Stedman is an alumnus of the city’s university. Ribble Weldtite’s 2021 roster also includes Gruff Lewis, the reigning Welsh road race champion, who will no doubt be keen to compete in the Tour given two full Welsh stages are planned for the first time in modern race history this September.

Canyon riders Alex Paton (2018) and Rory Townsend (2019) have claimed the race’s sprints jersey in the last two editions of the Tour. The team’s roster now includes Jacob Scott, the race’s reigning ŠKODA King of the Mountains champion, who won the jersey two years ago riding for SwiftCarbon.

This year’s Tour of Britain will see 100 of the world’s best riders set to tackle eight thrilling days of racing from Cornwall to Aberdeen. Both Wales and Scotland will host two stages of the event, while seven of the 12 start and finish venues announced to date – Penzance, Bodmin, Sherford, Warrington, Hawick, Stonehaven and Edinburgh – are new to the event.

The full routes of all eight stages of the Tour of Britain – including ŠKODA King of the Mountains and intermediate sprints locations – will be announced in the summer. ITV4 will continue to broadcast live flag-to-flag coverage of every stage, as well as a nightly highlights show, allowing fans in the UK to watch wherever they are.

With cycling enjoying a boom in the UK, and hundreds of thousands of new and returning cyclists taking to two wheels, there are a range sponsorship opportunities with the Tour of Britain for brands looking be associated with the UK’s biggest professional cycling event.  Opportunities exist from title sponsorship of the event on a national level to regional level positions supporting individual stages. Visit sweetspotgroup.co.uk/sponsorship-opportunities for more information.