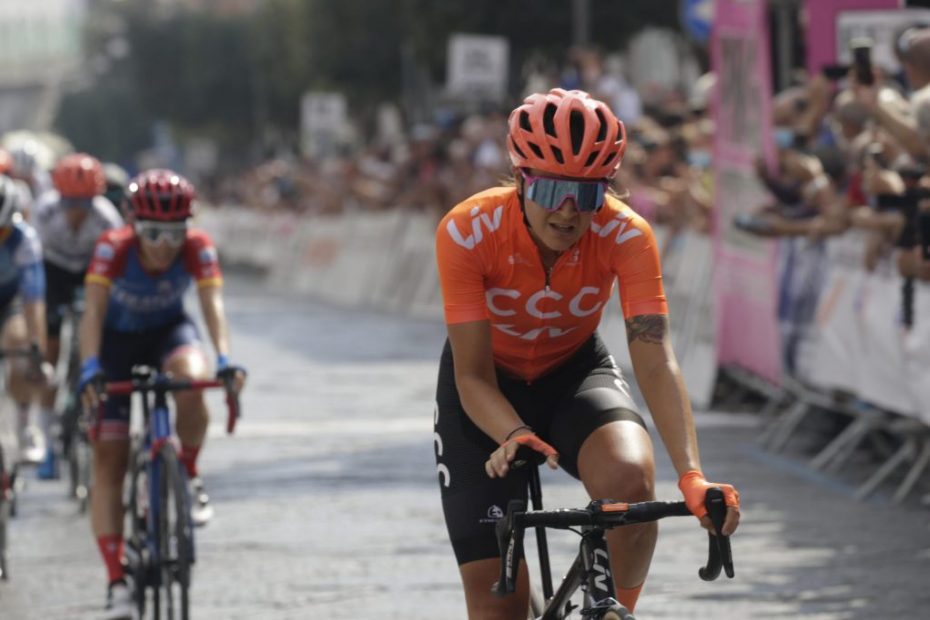 CCC-Liv is left with mixed feelings following the seventh stage of the Giro Rosa. The orange squad was once more dominant in the final phase and prepared the sprint for Marianne Vos again to perfection. Our three-time stage winner in this race, however, fell in the last 1.5 kilometre. The seventh stage to Maddaloni was characterised by many attacks. After the last breakaway was caught, the peloton started two climbs towards the Santuario San Michele Arcangelo (4 kilometres, 5.6 percent average gradient). Sports director Jeroen Blijlevens: “Several riders broke away during the second climb, including Marianne Vos. Soon after, a group with Soraya Paladin and Ashleigh Moolman-Pasio connected. Our two riders took the lead to position Marianne Vos for the sprint.

Right before the last kilometre, there was a crash involving Marianne Vos. At that moment, we lost our chances for another day victory.” The Belgian Lotte Kopecky, who has been riding strongly throughout this Giro Rosa, was the fastest of the bunch. Soraya Paladin finished sixth, Ashleigh Moolman-Pasio ninth. Marianne Vos stays in the lead of the points classification. She was left with a few abrasions on her back from the fall. Photo credits: Cor Vos