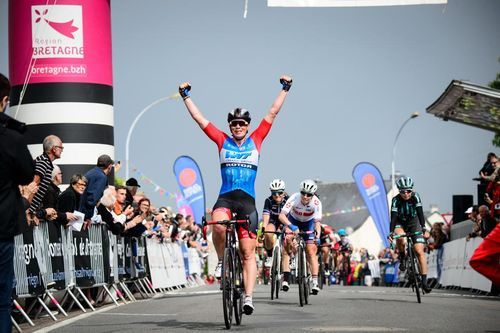 Kirsten Wild powers away in the bunch sprint to win WNT-Rotor Pro Cycling’s first Women’s World Tour race at Dreidaagse De Panne. The team of Sarah Rijkes, Lin Teutenberg, Gabrile Pilote, Claudia Koster, Lise Brennauer and Wild raced the 136km from Brugge to De Panne. The race was fast, with a favourable wind direction pushing the bunch at a good rate meant only few attacks were attempted throughout the day.

With the race looking like it would be bunch sprint from the early stages. Positioning to the finish would be crucial if you wanted to win. Wild with help from all her team mates was in the right place coming in to the closing few hundred metres. A bunch sprint with a lot of fresh riders is always like a lottery, Brennauer and Wild rode like a tandem in the closing kilometres with Brennauer dropping Wild in to position on the final corner. Wild looked to be boxed in but the gap opened and she took her chance and won by a significant margin.

Chatting after the race Wild said;

“I’m very happy, it’s a nice win and a world tour win. I have a lot of trust given to me by the team so it nice to give back the trust shown in me. Crossing the line I was proud of how the team worked and winning this race together.”

Wild showed her speed for fast finishes, it will be an exciting year. A proud moment for everyone at the team winning our first Women’s World Tour race, hopefully the first of many more.