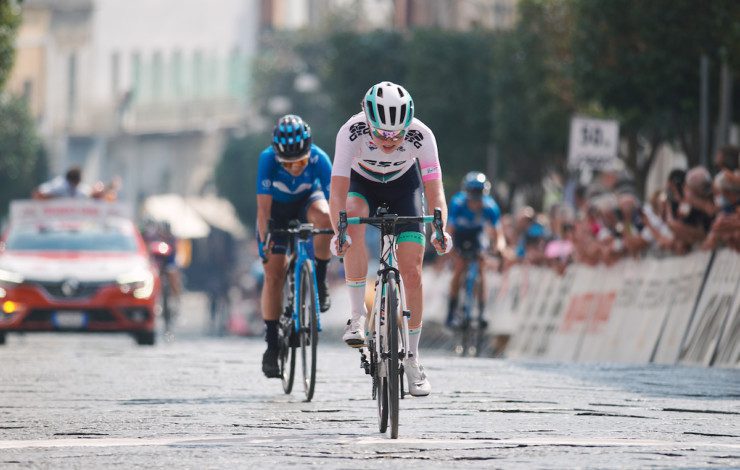 The eighth stage of this year’s Giro Rosa was the shortest, at only 91.4km. The course started uphill from Castelnuovo della Daunia and also finished uphill in San Marco La Catola, but not before the field had to contest a particularly challenging 3.3km long ascent with an average gradient of 12 percent. Today’s parcours consisted of challenging terrain, and was a course fit for the climbers. Having performed very well so far at this year’s edition of the race, Équipe Paule Ka and was again today concentrated on defending Mikayla Harvey’s white jersey and its two top-10 positions in the GC.

Today, the riders had to do battle not only against the tough course, but also the significant crosswinds. With 40km remaining until the finish, a group managed to get away, but was reeled back in again before several more attacks flew off the front. The stage ultimately came down to a group of favourites, which had made it to the fore to fight out the win. The victory was taken out by Longo Borghini, while Mikayla crossed the line in a strong third place. The day was not without bad luck, however, with our New Zealand rider suffering an ill-timed mechanical incident. Yet with the full support of her teammates, she was able to recover from this setback and rejoin the racing, and eventually go on to take an impressive podium place. Mikayla remains fifth in GC and keeps her white jersey while Lizzy Banks maintains tenth position overall.

As Mikayla explains: “I had such an incredible day on the bike. It was a rather dramatic race, starting with intense crosswinds, but my teammates helped me to stay in a good position in the echelons. This was actually only my third time racing in proper echelons, and I really learned a lot. Unfortunately, I also had a mechanical and needed a bike change, so lost some time, but all my teammates came back to me, and managed to get me into contention for the finale. I am so grateful for their hard work. I was in a perfect position going into the climb thanks to Lizzy’s efforts, and then the final battle began. I climbed my heart out and went so deep, and as a result was able to take third place. After the finish, I was just so overwhelmed and speechless after this team performance, and I’m really excited for what tomorrow will bring.”

After the stage, Team Owner Thomas Campana praised the achievement of the team: “Today we witnessed an outstanding performance, but that’s what this team stands for, after all. Following the exit of the previous GC leader, the race was almost reset. Today was, as expected, a very hard stage, and in addition, we also had to contend with strong winds of over 30km/h. After the first climb and in the subsequent descent, echelons had already formed, and the main field split into pieces. It was a riding – chasing – riding scenario, and we experienced a dangerous moment when Mikayla had a mechanical, which required the whole team to bring her back. However, the riders were able to bring her into a good position for the last climb, and in the finale she really showed her strength, finishing third. This is a great achievement by a talented rider as well as a team that knows how to come together to bring about outstanding results.”