Home » No-one is completely certain of how this will unfold

No-one is completely certain of how this will unfold 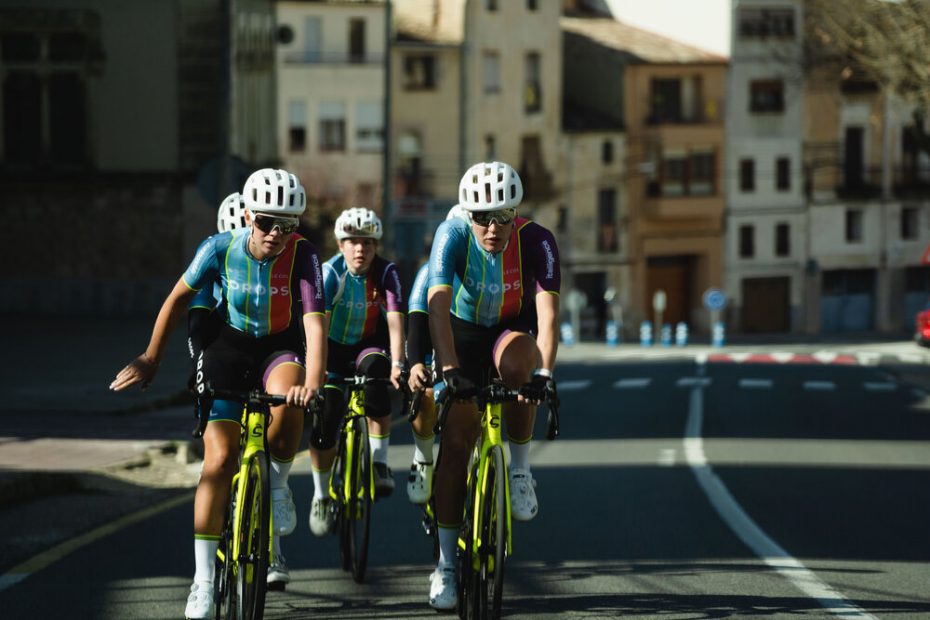 As April Tacey crossed the finish line, her virtual avatar nudged past her competitors and swerved around the artificial corner. At home, she slumped over the handlebars of her bike in a joyful, tired celebration and waited to be interviewed.

“It feels amazing” she spoke to the camera. The 19-year-old had just won her second stage of the Virtual Tour de France, organised by Zwift.

While the world continues to endure a global pandemic, the human race is left adapting to a new form of life. Many of us have encountered a new-normal of working from home and social distancing. Just as the cycling season was beginning to heat up, races quickly fell away in front of our eyes as riders and team staff were forced into lockdowns.

Drops’ season began with high aspirations. The team were looking forward to improving on a tenacious team performance throughout the previous year. But racing has undergone a recent redesign. One safer for cyclists, allowing them to compete against each other despite being separated by hundreds, if not thousands, of miles. Zwift’s Tour for All, that ran from the 4th to the 8th of May, was a five-stage e-racing event hosted by the cycling app.

“It [The Tour for All] was amazing. I’ve done Zwift as in like, my training sessions. So during our first race when we went to Valencia, I crashed and broke my collarbone and I was out of action for a bit. So I made the most of Zwift, but I hadn’t actually done many races. But it was amazing. The way that each team can log in, so it didn’t matter where anybody was. We had girls in Australia, America, all around Europe logging in, and some huge names, which I thought was really cool and exciting and the adrenaline was exactly the same and ready for a normal race. There’s also a knack of how you race in it. If you’re familiar with it, you’ll do really, really well. If you’re not that familiar, it’s quite hard. But that was shown actually because there were so many big names, who on the road would absolutely smash it and win and probably just ride off from people, and yet they were mid-pack. So it’s kind of nice to be surrounded by them and to see that ‘Oh, it’s not just me that finds this a bit strange and a bit hard’, it’s everybody. So that was really cool. But as a whole, I thought it was really good. And I think if the Coronavirus carries on and we can’t race, virtual racing has definitely got a place.” – Emily Meakin.

Lowden echoed Meakin’s sentiments, noting how the Tour for All changed her opinion on Zwift.

“Oh, it’s good. I’ve resisted it for years, I’ve never, ever been interested in Zwift and everyone’s been telling me I should do it. And I’m like, I don’t need to because I like going on the turbo. I like putting my music on really loud. I don’t need a screen. I’ve not been interested. But when we did the Tour for All, oh my god, it’s amazing. I absolutely loved it and I thought it was so good. I finished the last day and I really felt like I had raced, so I will definitely do more of it. I think it’s amazing that we’ve been able to race virtually.” – Jossy Lowden.

Zwift’s popularity with Drops is exacerbated by its convenience. The indoor training aspect eliminates cars and any unideal weather conditions. The unpredictability of cycling – from freak crashes to sustained injuries – can be circumvented through building up fitness while using the app. Meakin was able to train on Zwift after breaking her collarbone at the Setmana Ciclista Valenciana. April Tacey previously fractured her patella and used Zwift to build up her fitness and recover. After participating in the Tour for All, she raced to victory in two stages of the Tour de France Virtual.

“I broke my patella in Spain, and it was the most freak accident I’ve ever had. Like, I’ve had so many worse crashes and stuff. But I just fell down a ditch and hit a rock.”

The unexpected prevalence of virtual racing during the season has skyrocketed. However, riders revealed that they’re missing aspects found on the road. Sara Penton explained how virtual racing eliminates tactics and reading the bunch. This point was supported by Marjolein van’t Geloof, who noted how “[Drops] are really skilful in the bunch.”

Penton further stated that “I think the main issue with virtual racing for me or virtual training is that it’s really not the way I like to race. You’re missing the tactics and reading the bunch – it’s too far away from why I like to race. As Marjolein previously said, it’s more like a numbers game and a TV game rather than the feeling you have on your bike in the bunch with your teammates. But it’s a good compliment, and for those who like it, it’s not exactly like racing, but it’s something else. And if you like it, I think it’s a good setup if you want to alternate your training. But in Sweden, I can still ride really hard with the guys and that makes it more race-like for me. So I would rather do that than sit inside if I can.”

Van’t Geloof also explained her beliefs on how sponsors could be influenced by the pandemic.

“I think it will get back to normal but I think e-racing will get bigger. I think normal cycling will go back to normal as it was. I think one thing will be different, and the one thing that will be really impacted by this is sponsorship. It will be really hard to get a good sponsor and a financially healthy company to sponsor you during this crisis, because it will take long-time for companies to recover from this.”

The Drops team have been handling the pandemic and lack of road racing in differing ways. The baking bug has bit Lowden, as she also takes on more work with itelligence, a lead sponsor of the team.

“I work part time as well. One of the team’s main sponsors is a company called ‘itelligence’, which is the company I work for, they are like an IT analytics company. I’ve just kind of thrown myself into that a bit more. Because during race season, when we’re away training a lot, I don’t end up doing an awful lot of work. So I’m lucky that I’ve had that, and then living with my boyfriend, he’s a cyclist as well. We just busy ourselves with little projects, things that are going to make us go faster in the long run. Little things that we can get really stuck into, and you basically just focus your energy on what can we do when we do get to race. And then the other things I’ve been doing, baking. Loads of baking. I like baking anyway, and we train enough that we can eat it all. I really got into rhubarb jam because it’s in the garden, and just getting creative with different recipes for dinner. Especially when lockdown first started, like in the supermarkets, it was really random the things that you could get. So instead of being stressed about it, I was like, let’s just see what we can get and make up with recipes.”

App usage has surged in the last few months; Tik Tok, Zoom and Strava are just three examples of platforms becoming more popular. Van’t Geloof integrated her skills as a personal trainer with her platform on Instagram, working on core stability videos before being able to head back to work.

“For me, it’s really hard to do nothing because normally I also work one, two days a week. And I have my clients and everything and so that also stops during lockdown. I just had my training and I was really bored. So I started doing some Instagram videos for core stability, I started reading a lot more books and I also started trying to learn Spanish. It’s all just one week, two week things and then I’m bored again with it. But it’s all these little things that I try to keep myself busy with. I try to keep my studies up to date, so that’s really good to keep up with trying to read scientific journals. It’s great to keep busy but I really cannot watch Netflix for days. I’m also a physical therapist, so it’s nice that we’re able to go back to work with a lot of protection, a lot of hand sanitizers and everything needs to be cleaned after every person. It’s a lot of extra work, but it’s good to keep going with it. It’s fun.”

We’re faced with unknown territory as road racing beings to return. No-one is completely certain of how this will unfold by the end of the year, but interviews with Drops spotlighted their excitement at the introduction of Paris-Roubaix to the Women’s World Tour calendar.

“WOOOO! That’s my thought. I would really love to race that race. Really, really.” – Sara Penton.

“Yeah. I’ve always said I need to ride a Roubaix for women before I quit. So yeah, it’s my dream race. It’s amazing that we finally have it on the calendar and I’m hoping for a wildcard.” – Marjolein van’t Geloof.

“Oh, yeah, I think it’s amazing. I’m so happy. Yeah, that’s, well, you know how I said there’s big races towards the end, that’s one thing that I’d love to do. At Drops, Bob [Varney] organised a Classics team, which was the one that would go and do all the races in March and stay in Belgium. That’s right up my street. So hopefully I’ll get included for that. I think I will hopefully. But that’s one thing I’d love to do, to be able to say that you’ve raced in the first edition, that’s pretty special, isn’t it? As a sport as a whole, I think it’s amazing. Finally, yes, we can do this. And to be honest, I don’t see why they wouldn’t do it anyway. Because, with Omloop Het Nieuwsblad, they managed to do that. So it seems like it’s needed anyway. It’s a step in the right direction, isn’t it? So that’s really cool. I don’t know how hard it’d be. I’ve never even ridden half of those sectors.” – Emily Meakin.

“Yeah, definitely really cool. I love the fact that the Classics are going to be in the autumn because, weirdly, I’ve not really been that fussed about doing the Classics partly because on the cobbles it’s cold and it’s wet. But now they’ve been rescheduled for the autumn, I’m suddenly really up for it. And Paris-Roubaix, that’s cool. Any of the really iconic ones that we’ve grown up watching, and to maybe get a chance to do it would definitely be a silver lining to come out of this.” – Jossy Lowden.

The race, currently scheduled for the 25th of October, is a World Tour event. The team will need a wildcard from ASO to participate, but Bob Varney’s future vision for Drops remains bright.

“We have gained a reputation for being the plucky underdog, constantly over-achieving, and are widely acknowledged as one of the most successful development programmes. The next step is for Drops to become one of the top teams in the world. That step is to become a UCI Women’s World Tour Team.”