Ruth Winder walked up to the podium after Brabantse Pijl believing she had just taken second place.

“And then all of the cameramen and everyone was like, ‘celebrate, celebrate,’ and I was like, ‘Why?’” Winder recalls. “I’m like, ‘Why do they want me to put my hands up?’ And then someone was like ‘Ruth, you won. You’re Ruth Winder, you won.’”

The next 15 minutes were a nauseous blur as judges conferred to confirm the result, and race staff showed her the official photos of the nail-biting finish. Winder had thrown her bike over the line after sprinting all-out for the win, but Demi Vollering of Team SD Worx had seemingly beaten her to the spot, and celebrated so confidently over the line that Winder assumed her rival had won.

But Winder’s efforts were not in vain. Vollering started her celebration a split second too early, opening a window just wide enough for a hard-changing Winder to eke out a win that could only properly be measured in millimetres. The ending was a double lesson in persistence and finishing the job you’ve started.

Winder was also particularly suited to the task. In 2016, she took silver at the Rio Olympics in team pursuit track cycling, a discipline in which races are often decided by almost imperceptible margins.

“Everything is down to the tiniest one-hundredth of a second sometimes in track racing that you just get so used to really, really racing and giving everything you have to line,” Winder says. “And while you’re not throwing your bike the same way that I threw my bike yesterday, you’re really pushing your bike forward.” 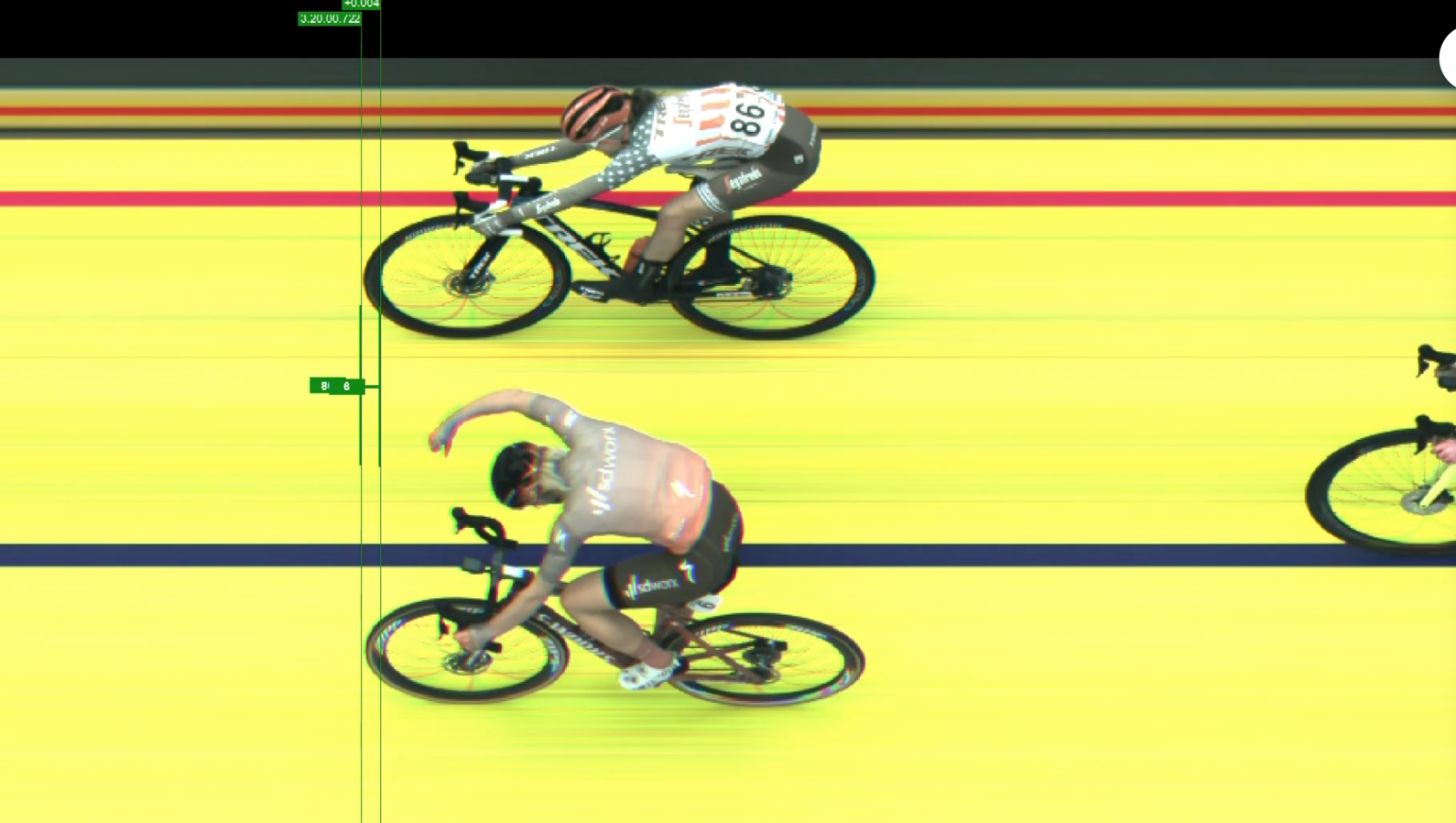 Winder’s closing metres at Brabantse Pijl were a masterful display of discipline and instinct unlike anything you might see in cycling for a long time. She spoke to the Trek Race Shop to explain how the ending unfolded, and what the win means to her.

The art of the throw

Throwing a bike towards the line takes technique that is built through hours and hours of, essentially, noodling around on two wheels.

“Bike racing is all I’ve done since I was 15 or something,” Winder says. “You have to be pretty comfortable, because if you’re really gonna throw the bike as far as you can forward, then your chest has to come pretty close to your saddle, and the bike is really far in front of you.

“On social media, I’ve been laughing with [Trek Factory Racing XC mountain bike rider] Jolanda Neff because she used to tell me, ‘put your saddle to your boobs,’ or ‘your boobs to your saddle.’” 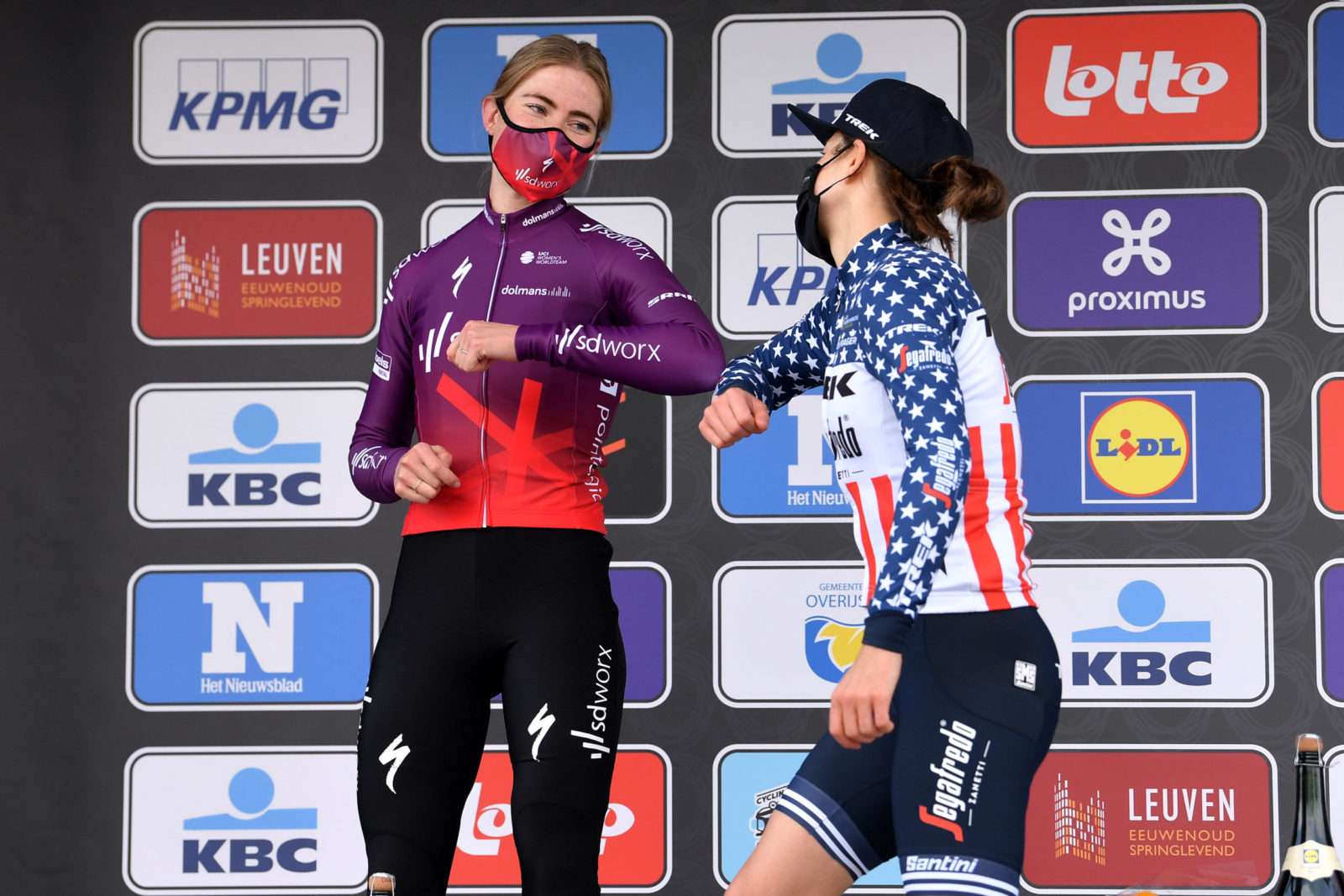 Ruth Winder and Demi Vollering sharing a friendly elbow bump on the podium.

The throw was an instinctual reaction, but it also needed to be done properly. Only a few well-season cyclists have the muscle memory and balance to do it effectively, but that doesn’t mean Winder practices it. She picked up the necessary skill through years of tacit learning.

“You actually time the throw with your pedal stroke down to push the bike forward, but it’s not something you can think about 200 metres before the line,” Winder says. “It also felt familiar from riding a mountain bike, which is maybe funny. But you get really comfortable on a mountain bike with moving your bike forward and side to side underneath you. Some of that instinct maybe came from that, as well as track and crit racing, and all those other situations.”

Few road riders would have fought for the line the way Winder did. Her breakaway group of six riders was composed of all-rounders who don’t often find themselves in reduced bunch sprints, much less throwing their bikes.

Winder was more than up to the task, but even if she wasn’t, she could not have asked for better support.

“Lucky for me, my directors are really good sprinters. We had Giorgia Bronzini with me in the car yesterday, but Ina[-Yoko Teutenberg] is also such a good sprinter,” Winder says. “Giorgia was just talking in my ear telling me to be patient and wait.” 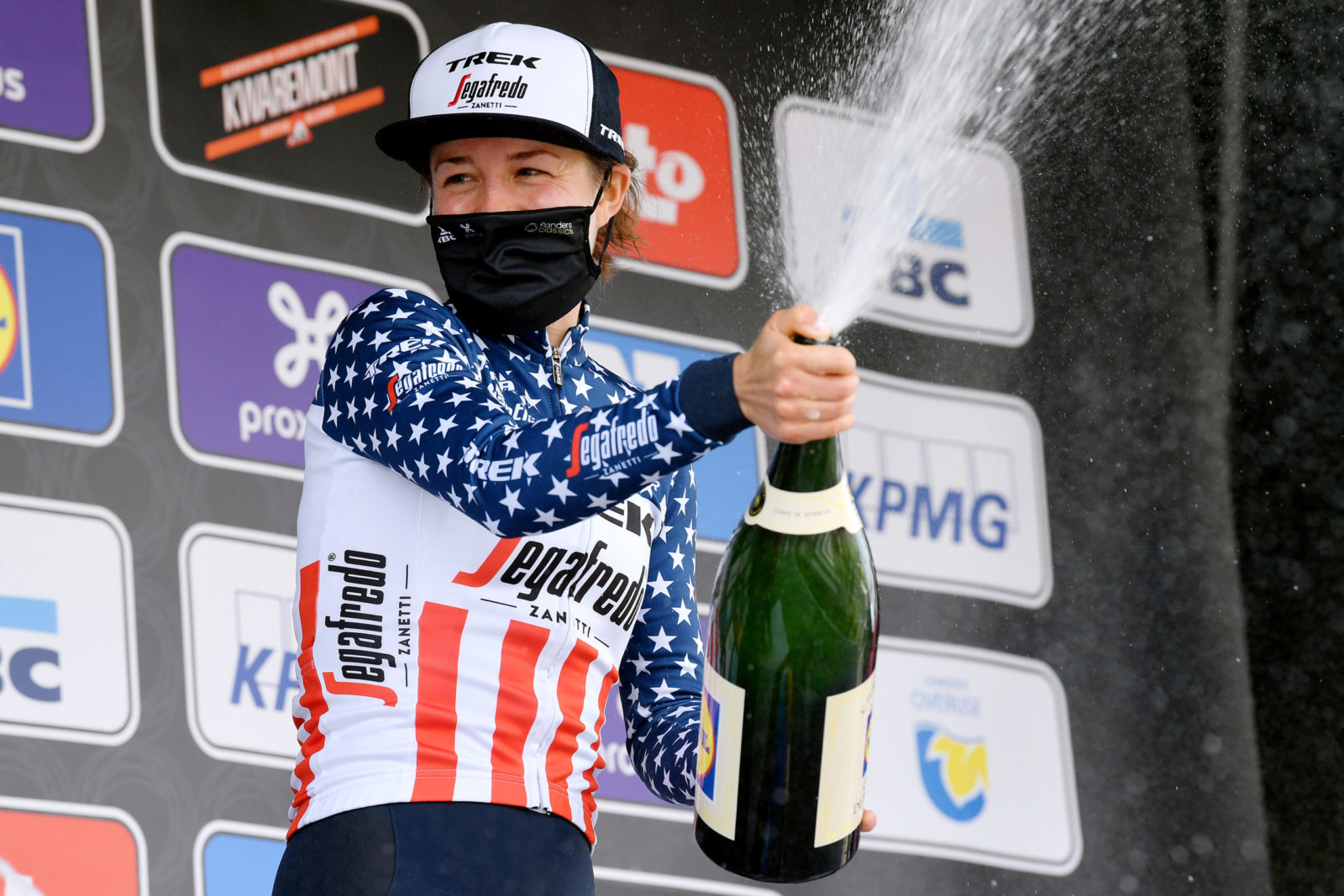 Winder had been anxious to start her move. She likes uphill finishes, and thought about attacking 300 metres earlier, when the road was still climbing before it levelled off into the slightly downhill finish.

“So much of me was like, ‘I’m not gonna be able to outsprint these girls, I’m gonna have to go early,’” Winder says. “But then you also know if you go early, then there’s a good chance that everybody else is thinking, ‘No way are we going to let them ride away,’ and then they just get on your wheel. So Giorgia was like, ‘You just have to wait, you just have to wait,’ and it was so painful.”

Elisa Balsamo of Valcar-Travel & Service opened up the sprint at 250 metres to go, but faded, giving Winder a chance to accelerate into the lead with just under 100 metres remaining. Vollering jumped off of Balsamo’s wheel to seemingly catch Winder, but for Winder’s now famous bike throw.

Bronzini’s direction proved to be sage.

“I didn’t think that I had it because Demi celebrated with such confidence, but we were also so far apart from each other on the finish line that I couldn’t see her, really,” Winder says. “I’ve always, always raced to the line. I’ve always been the kind of person that’s like, ‘You cannot celebrate too early.’ And I think even last year we had so many finishes on the men’s side where you really had to learn that lesson.”

Putting a moment in perspective

The race was one of the most memorable of Winder’s career, and not just because of Brabantse Pijl’s prestige or the thrilling finale. Prior to Wednesday, Winder had been suffering a quiet crisis of confidence after losing her early 2020 momentum due to the coronavirus pandemic. She won last year’s Tour Down Under and seemed to be on her way to a big season, but racing quickly screeched to a halt as nations went into lockdown.

“A lot of people have confidence in me, but to have it personally has been really hard,” Winder says. “Yesterday, I backed myself a bit more. And it feels really good to have done that and then have gotten the result. And in the end, I think I would still feel this way if I had come second because I really tried, I really went for the race, I really raced the best I could.

“My mind went out the window quite a lot last year, and I felt like I really had to fight to get myself back to where I was in January of last year. It just feels good to be there again now.”

A lot of people have confidence in me, but to have it personally has been really hard.

The win may have been jaw-dropping, but it didn’t come out of nowhere. Winder felt good about her chances early in the week, and even made bold promises to her fiancé.

“This is really unlike me, but I told him on Monday, ‘If I win, I want to buy an espresso machine.’ And he was just like, ‘OK I don’t think the prize money is very good,’” Winder says. “And I was like, ‘It’s not about the prize money.’ It was about me being able to say, ‘if I win,’ and putting that confidence in myself.

“It’s funny because now I did win and now I can buy an espresso machine!”

One centimetre at the line, one whole step up the podium.

Needless to say, Wednesday was a great day for Winder on several levels. She’s not ready to think about what it may mean for the rest of the season, however. As confident as she feels right now, she doesn’t much like making predictions. That’s another lesson that race reiterated: Winning is a precious experience that can’t be taken for granted.

“I was like, ‘Let’s not talk about next week; let’s just focus on today.’”