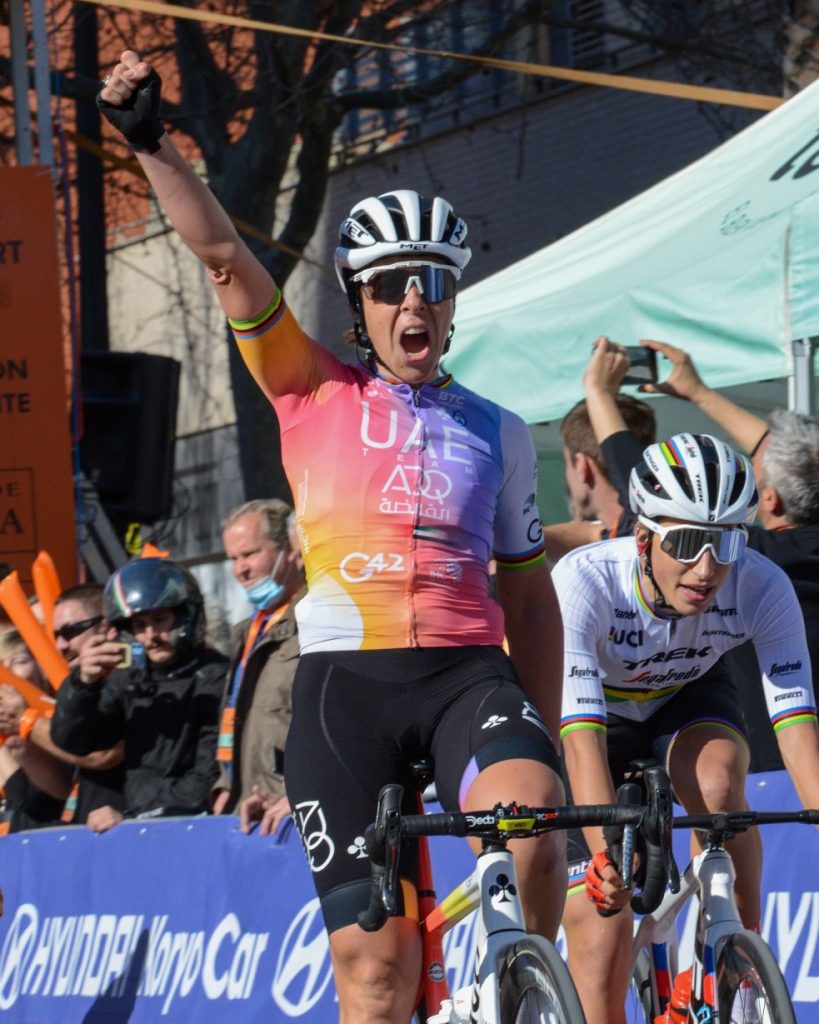 After the tough climbing of Stage 3, today’s stage offered a chance for the sprinters on paper. The presence of the 2nd Category Alto de l’Oronet climb is a good launchpad for anyone wanting to make a break for the stage victory. The 30km between the summit and the finish line would surely be too far but last year we saw Urska Zigart win on a similar stage, defying the sprinters.

The stage started calmly after yesterday’s tough riding. Over the crest of the Cuartell hill, Mieke Kröger, Emma Langley and Teuntje Beekhuis had a small gap. Jumbo Visma weren’t prepared to let them get away though as they had designs on the intermediate sprint coming up. Heading into today’s stage, their rider Karlijn Swinkels was on the same amount of points as jersey wearer Kasia Niewiadoma. So it was no surprise to see Jumbo Visma controlling the peloton.

At the intermediate sprint, Karlijn Swinkels took the full 5 points, with Linda Riedmann and Anousha Koster (both of Jumbo Visma) locking out the rest of the points for the team. Shortly afterwards, CAMS-Basso’s Danni Shrosbree attacked, with Latvian Lija Laizane joining her. The peloton was happy for the pair to take the lead and let the gap head out to 1 minute. The break played into the hands of Jumbo Visma who could ensure that only 1 point would be available at the next intermediate sprint.

With 62km to go, Cédrine Kerbaol of Cofidis attempted to bridge across to the lead pair and once that was neutralised Grace Brown went on the attack. Sara Poidevin of EF TIBCO tried to go with her but was reabsorbed by the peloton. Brown made it across the gap and linked up with Shrosbree and Laizane. In the lead-up to the intermediate sprint, Shrosbree began to drop back but still took 3rd over the line. Laizane took the max points ahead of Brown, confirming Karlijn Swinkels as the winner of the sprints jersey.

Movistar kept a watchful brief at the front of the peloton, with Grace Brown only 2’20” down in GC at the start of the day. They seemed happy to keep the gap around a minute on the lower slopes of the 2nd Category climb. By the summit, Grace Brown had dropped Lija Laizane and decided to push on alone, extending her gap to 90 seconds. The peloton woke up to the threat and the sprinter teams started contributing to the chase. Shirin van Anrooij was noticeable on the front for Trek as they set up an opportunity for Elisa Balsamo.

Team DSM belatedly managed to get Lorena Wiebes back into the peloton after the climb but their efforts weakened their lead-out and they dropped back. Elisa Longo Borghini led out Elisa Balsamo but Marta Bastianelli was able to sprint past and take the win. She’d looked impressive on Stage 2, so not a surprise that she has good form at the moment. Susanne Andersen took an impressive 3rd for her new team, Uno-X. Annemiek van Vleuten finished safely in the peloton to take the Overall victory.