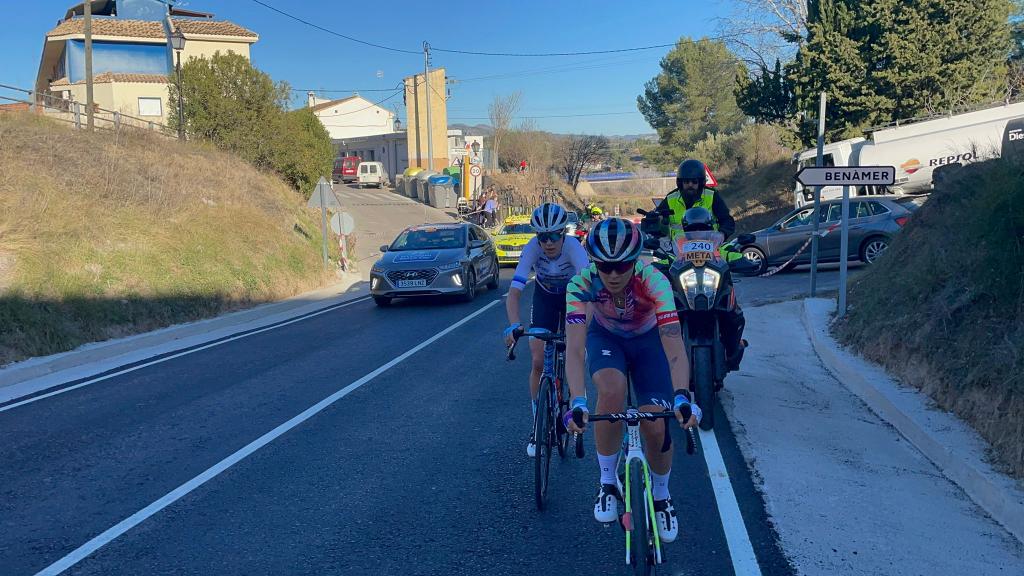 Today’s second stage of Setmana Ciclista Valenciana looked potentially tricky on paper. Starting the day with a long 1st Category climb had the potential to break up the peloton and cause chaos. The rest of the stage looked like it would be nailed on for a final sprint. For the pure sprinters, this was their best chance of a stage victory in the stage race.

The looming climb of the Alto Confrides encouraged riders to attack early on. The best chance for some of the riders to make it to the finish with the peloton would be by gapping it early on. Jeanne Korevaar of Liv Racing was the first rider to get a genuine gap after a few attempts by others. That was soon reeled in and the peloton pushed on, steadily dropping riders out of the back up to the summit.

Marta Cavalli was first to the QoM points. She moved up to 2nd in that classification. Erica Magnaldi was just behind her and holds onto the QoM jersey for at least another stage. Elise Chabbey attacked the descent but to no avail, Sofia Bertizzolo then countered that move before that too was closed down by Movistar.

Chabbey attacked again and this time Grace Brown and Elisa Longo Borghini joined her. A trio that powerful couldn’t be ignored by the peloton. The chase began to split the main bunch and race leader Elisa Balsamo found herself on the wrong side of the split. The gap to the peloton grew quickly and it was clear that Balsamo wouldn’t be contesting the stage or keeping the leader’s jersey today. A counter-attack by Shirin Van Anrooij, Juliette Labous, Kasia Niewiadoma and Marie Le Net took the first major gap of the day at the front of close to a minute. As the live coverage started, the gap was down to 40″ with BikeExchange working on the front in Teniel Campbell with UAE Team ADQ.

After their hard work neutralising that attack, yet another big attack went up the road. This time it was Brodie Chapman, Kasia Niewiadoma (again) and Floortje Mackaij. Erica Magnaldi and Neve Bradbury tried to bridge as well but couldn’t join on and shortly afterwards everyone was back in the peloton. The peloton eased off and attack after attack rained down on the riders. The possible sprint stage was turning into a where an unlucky rider could lose time in the GC.

The next successful attack saw the European champion Ellen van Dijk and Soraya Paladin get away from the peloton. The peloton couldn’t close straight away and with Canyon SRAM and Trek Segafredo both represented, other teams needed to chase. UAE Team ADQ had already done a tonne of work on closing the earlier attacks, with Magnaldi stretching the elastic at the back of the peloton.

FDJ sent the Australian pair of Brodie Chapman and Grace Brown to the front and they came super close to closing down the gap. On the long shot from the finish line, the peloton was suddenly super close. Van Dijk had enough power though to push on in the last 1km and still sprint. Paladin never quite looked able to come around the European Champion and Trek took their 2nd win in 2 days. Behind them, Marta Bastianelli claimed 3rd ahead of Annemiek van Vleuten and Mavi Garcia.