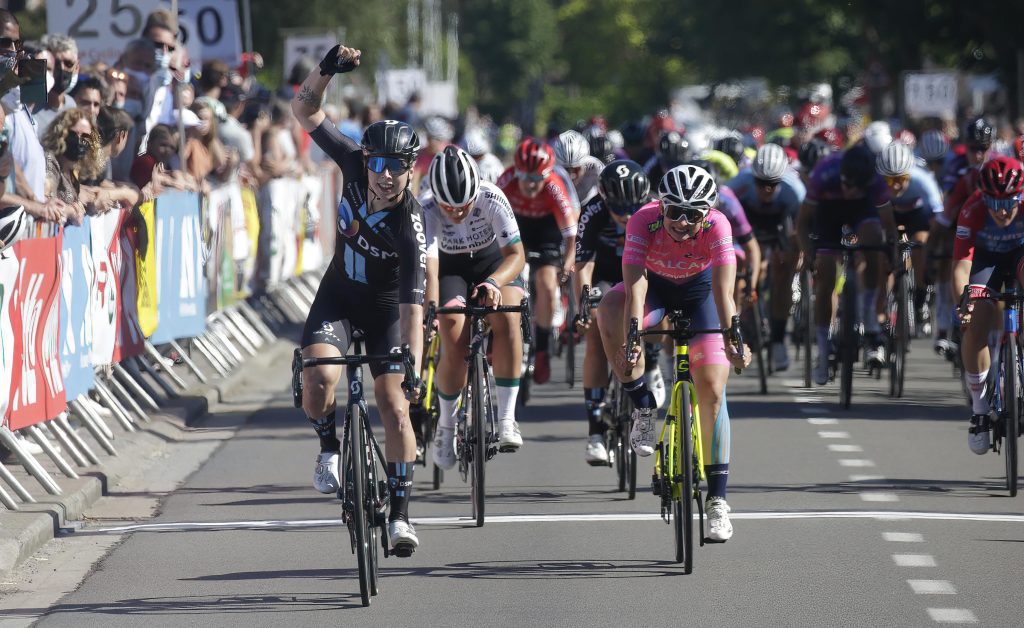 The SPAR Flanders Diamond Tour is the next round in the Lotto Cycling Cup, the year-long national competition in Belgium. The race is set at the 1.1 level, so a healthy amount of WorldTour talent can mix it up against domestic talents. It takes place around the town of Nijlen, situated just outside the major city of Antwerp in the far northern corner of the country. The hills of West Flanders have flattened out by the time you reach that area. So with such a flat parcours the race is another one of the sprint specialists to show off their power to the finish line.

The SPAR Flanders Diamond Tour was a casualty of the 2020 COVID season and wasn’t held in the end. The previous year saw Lorena Wiebes win the race in her breakout season at Parkhotel Valkenburg. The previous season Janine van der Meer won the sprint for the non-defunct Healthmate team. Nina Kessler won the sprint in 2017 for Hitec Products. Before then, Jolien d’Hoore won 3 years in a row between 2014-2016, winning the sprint each time.

DirectVelo will have a live ticker from 1pm BST

Live coverage starts at 3pm BST on rtv.be – not clear if this will be geolocked or not

The last winner of the race, Lorena Wiebes is in form after taking 4 victories since the start of May. As predicted in the Dwars door de Westhoek preview, she took the victory there last weekend. With no climbs of note to worry about, it’s tough to see her not on the top step of the podium. An honourable mention to her teammate Floortje Mackaij who was 4th in this race back in 2016. She won’t be replicating that this year though unless something happens to Wiebes.

Wiebes beat Elisa Balsamo in 2019’s race. Balsamo’s spring form was good, winning the GP Oetingen but she hasn’t raced much recently. The Dwars door de Westhoek was her first race since the start of May and she finished 7th. She should be in the reckoning for a podium spot though. Valcar is stacked with options here but they normally defer to Balsamo when she’s racing. Chiara Consonni has twice finished 3rd in the SPAR Flanders Diamond Tour herself. She took 2 wins back in April. Ilaria Sanguineti was 4th here in 2018 and was 8th in Dwars door het Hageland last weekend. Finally, Silvia Persico also has a pair of top-10 results in this race. She finished 7th in 2017 and 2018.

It’s tough to work out who the best option at Ale BTC Ljubljana is here. Tatiana Guderzo gets the team’s #1 bib and was 8th in GC at the Tour de Suisse last week. The rolling terrain of Stage 1 suited her so a flatter race feels like it gives others a chance. Anastasia Chursina took a stage win at the Vuelta a Burgos, winning the flat Stage 2. It’s comfortably her best result of the season, with no other top-10 result. The team also has Anna Trevisi who was 5th at the Ronde de Mouscron. The trio may see how they fare on the road to decide who will get the sprinting nod.

SD Worx have their usual riches of talent. Jolien d’Hoore is a 3-time previous winner here so should get the nod. It’s been 3 months since her last win but she’s had 7 top-10 results in the meantime. She’s a real shot for the podium. Her teammate Christine Majerus has a good history here, finishing 4th in 2015 and 2nd in 2016. You can expect her to do her usual job of chasing down anyone trying to attack. Amy Pieters would also be a strong finisher here and is in good form. She’s just finished 6th in the Thuringen Ladies Tour and then 6th in Dwars door de Westhoek. She could finish in the top-10 whilst still working for d’Hoore. And then you can never rule out a long one from Chantal van den Broek-Blaak either.

Emma Norsgaard continues to break out in 2021. After finally getting that first win at Festival Elsy Jacobs in May, she’s taken two more victories. She was consistent all week at the Thuringen Ladies Tour, finishing 3rd Overall. I fancy Wiebes for the win here but Norsgaard won’t be far behind and has one of the best chances of causing an upset. Amber van der Hulst has also impressed this season. She was 3rd at the GP Eco-Struct at the start of May and after a bit of a break, came back to be 9th at Dwars door het Hageland. She could make the top-5 but seems certain to be in the top 10 in this flat race.

It was a long time ago but Lisa Brennauer was 3rd here previously – way back in 2015. She wasn’t in top form at her local Thuringen Ladies Tour recently, although was still 13th Overall. She had a 6 week break from racing after the end of her spring classics campaign and she’ll be working towards the Olympics in this second part of the season. I can see a top-10 finish but it doesn’t feel as nailed on as it usually would.

Team BikeExchange haven’t confirmed their line-up yet, but I suspect Arianna Fidanza will be in it. She got her first opportunities of the season at the Setmana Ciclista Valenciana and finished 2nd and 3rd on stages. She was then 4th at the Dwars door de Westhoek last weekend too. She’s not quite in the top tier of sprint talent but she can still do well.

I’ve seen one startlist suggesting Trek Segafredo are racing here and I’ve seen one suggesting that they’re not. To cover all bases, I’ll include a couple! Normally this would be a Chloe Hosking type race but she’s still finding her feet whilst recovering from COVID. She’s not raced since Gent Wevelgem back in March. Lucinda Brand will probably have a go in the sprint then. She’s absolutely in form after winning the Thuringen Ladies Tour with a pair of stage wins. She then finished 6th in the Tour de Suisse for good measure. Not an outright sprinter, she could still definitely make the top-10.

We’re still waiting for the first truly big result from the cyclocross riders on Plantur-Pura. Yara Kastelijn has been there or thereabouts in a few races this season and could get herself back in the top-15 results here. Her teammate Laura Süßmilch was 13th in the SPAR Flanders Diamond Tour in 2019, so there’s a chance she gets the go ahead to aim for a result.

Lucie Jounier is the current standings leader of the Lotto Cycling Cup. She’s been quietly consistent with 4 top-10s this season. She’s been 4th twice at Ronde de Mouscron and GP Eco-Struct. She took over as leader after finishing 8th at Dwars door de Westhoek last weekend. Finally, the S-Bikes Doltcini rider Arianna Pruisscher has been netting some good results this season. She was 10th at Mouscron and 8th at GP Eco-Struct. Last weekend at Dwars door de Westhoek, she was a solid 15th. Pruisscher should be snapping around the edge of the top-10 again.

There’s not really any result of note this season for Kelly Druyts but she gets a mention due to her past results here. She’s been 2nd, 3rd and 4th over the years, with another top-10 result in 9th place. It’s a longshot that she recreates that here as her best result in 2021 is 57th at the GP Eco-Struct. It’s a similar story for Desiree Ehrler really. She only has one result in 2021, 89th in Stage 1 at the Tour de Suisse to go with 5 DNFs. The Andy Schleck-CP NVST-Immo Losch has finished 15th and 16th here in the last 2 editions however.

Amalie Lutro may get a solid result in this flat race. I’m basing it almost entirely on her best result of the season, 16th at Scheldeprijs. Her teammate Anne Dorthe Ysland is another outsider as well. She had a decent week at the Thuringen Ladies Tour, finishing with 2 top-20 positions. That seems to have given her some form as back home in Norway she took a pair of wins at Skatval this week.

Finally, Emily Nelson hasn’t raced at this level in 2021 so far and was balancing road riding with track cycling for many years. Going back to 2017 she did well in these sorts of races. Finishing 12th at Omloop van Borsele, 7th on a Festival Elsy Jacobs stage and 8th at the Trofee Maarten Wynants. She’s done well domestically in the UK since but it’ll be interesting to see if she can rewind the years.