The Spring Classics take their annual trip to Italy for the genuinely modern classic of Strade Bianche. This year is the 10th edition of the race, but it’s now on the WorldTour and its unique white gravel roads make it stand out. The name itself is defined by the race’s standout feature, Strade Bianche translating into ‘white roads’. The gravel presents a challenge where the surface is constantly moving under the tyres and rewards the best bike handlers. The finish of the race itself is spectacular with a long drag up a final climb before some tight corners and then swooping down into a plaza.

The final swoop almost adds suspense to proceedings with cameras having to briefly switch away before showing the victor crossing the line. Riders will have to have their noses in front before the end of the final climb, otherwise their chance has gone. Typically the race rewards powerful riders who have the ability to go quickly up some hills, but aren’t necessarily out and out climbers. 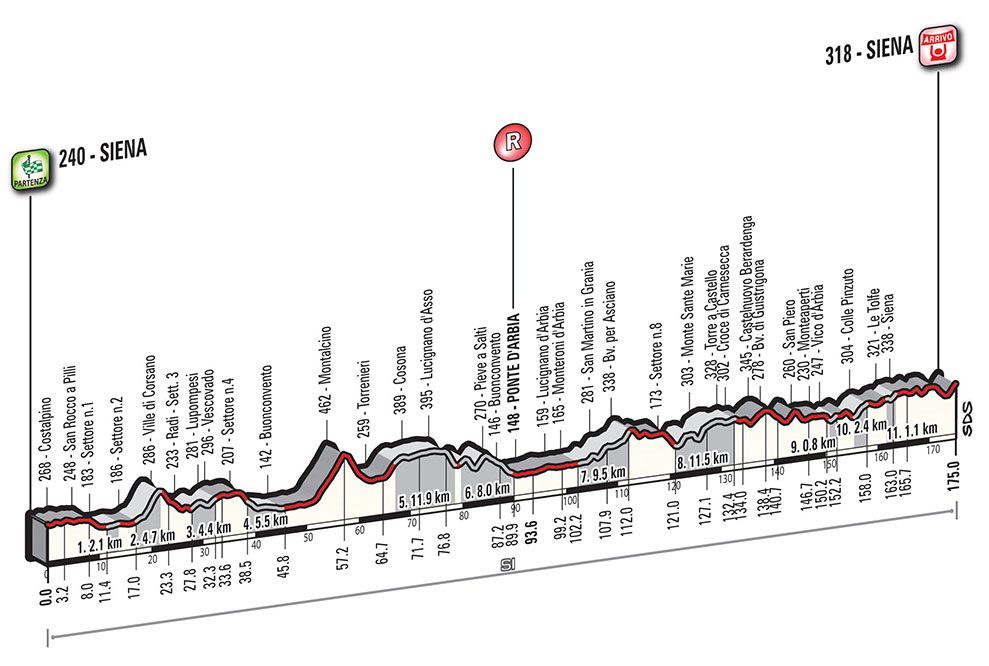 With three time winner Fabian Cancellara now retired and two time winner Philippe Gilbert not in the field, chances are we’ll be seeing a new winner of the race. 2015 winner Zdenek Stybar returns, as does 2014 winner former World Champion Michal Kwiatkowski. Both will be amongst the favourites again and will be ably supported by strong teammates. Quickstep’s Gianluca Brambilla and Sky’s Diego Rosa have both have placed highly in this race before. They will form a strong Italian attack in a home race. 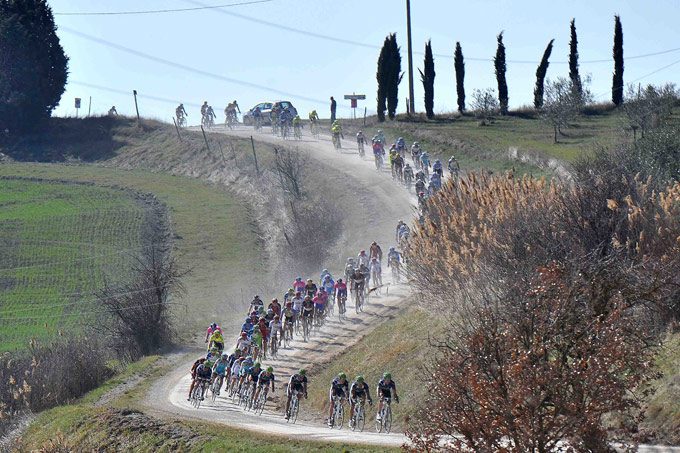 Fellow Italians Oscar Gatto, Vincenzo Nibali and Fabio Felline will also be looking to perform well at home. Only one Italian (2013 winner, Moreno Moser) has ever won Strade Bianche, so there doesn’t appear to be much of a home advantage. Gatto managed 5th in Omloop last weekend and finished 6th here in 2015. Felline finished one place in front in 4th at Omloop and also won the Trofeo Laigueglia on Italian soil this year. Nibali is going to be leading the new Bahrain Merida team, he won’t have much back-up but could put a lot of people into trouble if he makes it to the final climb.

Perennial Spring Classics top-ten rider Sep Vanmarcke has already managed one in 2017, finishing 3rd at Omloop Het Nieuwsblad. He should be a safe bet for a top-ten as usual. He will form a two-prong attack for Cannondale with Rigoberto Uran who has the potential to finish strongly and do well.

The strong Belgian contingent of Jasper Stuyven, Tiesj Benoot and Greg van Avermaet will be looking to emulate Philippe Gilbert’s achievements in Strade Bianche. Greg van Avermaet has already won Omloop het Nieuwsblad this year so clearly has the form. Benoot’s 4th place in Kuurne – Brussels – Kuurne shows form. He may struggle compared to some others on the final climb, but could finish strongly as Lotto’s leader. Stuyven finished 2nd in KBK and 8th in Omloop last weekend so he can definitely place well here. His issue will be whether or not he ends up having to work for team-mate Felline.

Edvald Boasson Hagen is Dimension Data’s threat for the race. He’s been training lots on Zwift recently – in fact my phone has just buzzed to say he’s on there now. He is the sort of powerful rider who can finish very well if he makes the selection before the end.

Lotto Jumbo will be hoping that Enrico Battaglin performs well on home soil. They also have Primosz Roglic who is in great form having won the Volta ao Algarve recently. Strongman Tim Wellens usually attacks for Lotto Soudal and there’s always the chance it will succeed. Team Sky’s young Italian Gianni Moscon may be let off the leash here. However with two strong leaders, may be forced into a support role. It’s similar story for Quickstep’s Petr Vakoc despite his 5th here last year.

BMC’s Daniel Oss is a powerful workhorse, a whole host of top-20 results in the Classics last year were testament to his good form. Similar to Wellens, he will attack and then anything is possible. Finally, if Nibali fades then Giovanni Visconti will be allowed to do his own race. He saves his best for Italian races and already has a top 10 in the Tour of Oman in 2017.