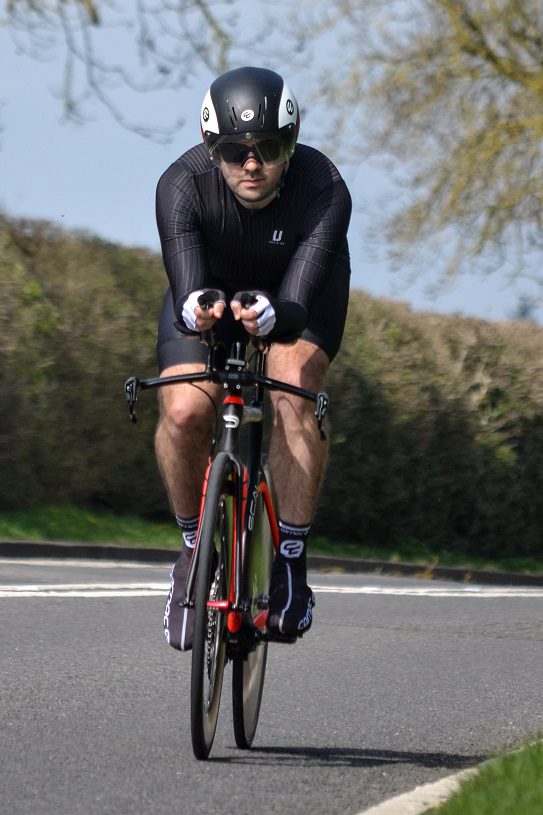 Last weekend I took part in my second Open TT of the year. The first one, in Coalville, was hilly and definitely didn’t suit me but gave me a chance to test out my new time trial bike in anger. Having had chance to set the seat to something close to the right height and riding a course that I rode last year on my converted road bike, I was looking forward to seeing the difference to my time it would make. Hosted by my club, Stratford CC, there were lots of familiar faces on the start sheet – some I reckoned I could beat, some I knew I couldn’t.

The course is fairly rolling, some early small digs were made to feel harder due to the headwind. The upside was that the stint on the dual-carriageway A46 was made to feel easier with the tailwind, particularly the last two gentle rises which caught me out towards the end of my last race on the K33/10D. The surface is reasonable to good. Early on there’s a nice strip of smoother tarmac until the first turn. Some potholes are apparent on the way into and through the village of Salford Priors, but once onto the A46 the surface becomes very nice.

The last time I raced here, I missed my start time avoiding a thunderstorm, which I acknowledge isn’t the best way to start a time trial. With an event HQ further away from the start line this time and better weather, I made sure I avoided a repeat and rolled up with 5 minutes to spare. I started with no issues, except for the headwind. The little rises near the start caused some issues though, the legs weren’t happy at having to work hard despite the decent warm-up they got on the way to the start line. I made sure to not push too hard on the easier descent bits in order to save some for the final rises.

Making the turn at the island by the pub in Norton, I took it quite quickly but found a load of debris strewn across the road which caused me to sit up and go a bit wider on the exit of the corner than planned. A good job nothing was coming the other way and I had room to play with. The next section to Salford Priors was supposed to be a tail-cross wind and downhill so should have felt easy, but it felt hard to keep the speed up for some reason. By this point my Garmin was telling me I was a second or two slower than my last ride on the same K33/10D circuit. Very odd considering I had bought a new proper time trial bike, wheels, skinsuit and helmet since then!

Going through Salford Priors I avoided the hidden pothole I’d managed to hit at speed last time and had finally begun to gain some time, now 5 seconds ahead of my personal best. I had to time my turn onto the A46 perfectly to slot into the traffic without having to stop, but did manage it pretty safely. With the wind now finally in my favour and some traffic going past to add to the friendly draft, I was gaining time on myself easily now. I felt good on the rises, but had to keep reminding myself to push harder as we were now getting close to the finish. I felt like I had more in the legs to empty myself, completely different to my last ride where I was gassing hard at this point.

I didn’t quite time my approach to the final island perfectly, having to hit the brakes when some motorbikes came round the island. I could’ve risked it but couldn’t guarantee they weren’t going to turn off into the services and didn’t think it was worth making that risk. A quick spring to the finish and I was done. A new course and distance personal best for me of  23:46, 28 seconds quicker than it was previously. That was enough to make me finish 51st of 94 riders on the day.