“I’m really excited”, Roberts says. “I’ve had a bit of a tough two years due to injury, which BikeExchange really supported me with. However, I feel a fresh start will be positive for me going into next season to rebuild and develop and I can’t wait to do that with this team. I’m looking forward to starting a new adventure with my new team and getting to know all the new girls and staff.”

Roberts became national champion in 2018. In 2019 she then won two stages in the Tour de Bretagne. First in a bunch sprint and then a day later with a solo. That also says something about the rider she is. “I’d say I’m quite a powerful rider and don’t always just depend on my sprint. I can also go out solo and ride a decent Time Trial.” 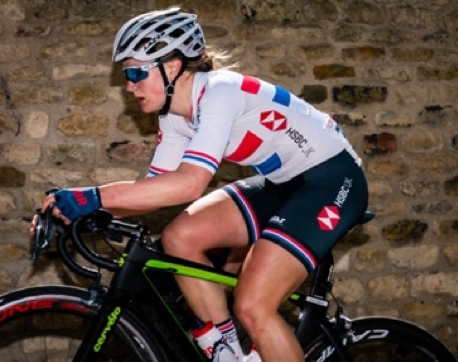 Progress
An injury kept Roberts from doing a lot of races so far this season, but she looks positive towards the future. “I have been out of racing since the spring due to an ongoing injury. Over the last few months I’ve been doing a lot of rehab work and am now slowly adding in some small rides. I have a long way to go to be race fit so at the moment we are assessing how my progress is going as to when I’ll return to racing.”

Roberts is looking forward to get back to racing. About that and her goals for next season, she says; “I’m also looking forward to giving my all to help the team and I also hope to have some opportunities to go for a result as well. I haven’t been able to race how I’ve wanted the past two seasons due to my injury, so I’m really motivated to get myself back to a high level and show what I can do. I have ambitions both on the track and road and feel I have the freedom in this team to pursue both disciplines, which is exciting for me.”

Getting back to the podium
The goal for Roberts and Team Coop – Hitec Products is to get her back to her old shape and develop further from there. “We are seeing how I progress over the next month so my main goal for now will be to get myself back to full fitness and riding without pain. I hope to be able to race before the end of the season. Looking towards next season, I haven’t targeted any particular races at the moment, but I would like to achieve podium places on both the road and track.”