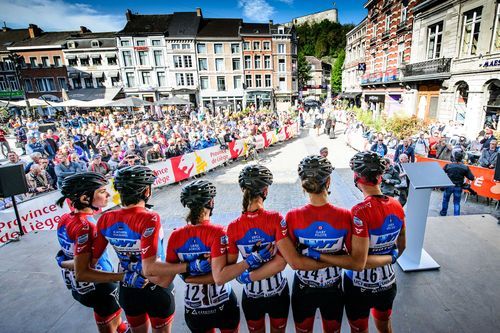 At the Ride London 100 Sportive, part of the British capital city’s festival of cycling, five riders from WNT-ROTOR Pro Cycling were joined by six members of the team’s support staff and employees of Team Cutting Tools to raise money for the Anthony Nolan Trust, which is a leading light in the battle against blood cancer.

The cycling community is like a big family and among the WNT-ROTOR Pro Cycling team and the larger team within the Ceratizit Group this family bond is strong. Therefore, having witnessed the fight that Tom Walker, brother of the team’s Social Media and Communications Manager Hannah Walker, put up, with the support of The Anthony Nolan Trust, a fight he eventually against a rare bone marrow disorder Aplastic Anaemia, as well as Acute Myeloid Leukaemia, that he lost in June 2018, the team wanted to show their support. During his years of treatment, The Anthony Nolan Trust facilitated two bone marrow transplants, all of which, including a third one from Hannah, Tom’s body rejected.

Team WNT-ROTOR Pro Cycling professional riders, Kirsten Wild, Lisa Brennauer, Lara Vieceli, Lin Teutenberg, Claudia Koster, and Sarah Rijkes, were joined by Claude Sun, Tony Pennington, Adrian Fitts, Dirk Baldinger, Sebastian Nittke and, of course, Hannah on the 100 mile ride from London out into the Surrey Hills and the infamous Box Hill, before returning 100 miles later finishing in front of Buckingham Palace. A pledge of £1/mile from Ceratizit Group ensured that fundraising got off to a good start with a guaranteed £1100 donated, any additional support will be gratefully received and can be given at the team’s Just Giving page at https://www.justgiving.com/fundraising/wnt-rotor-ridelondon100

“Life threatening illnesses, especially in someone as young as Tom are devastating for everyone concerned, if by doing something that we all enjoy, we are able to help in defeating cancer, then the effort and the smiles at the end of the 100 miles are well worth it. I’d like to thank WNT-ROTOR Pro Cycling and Ceratizit Group for their support and very generous donation towards a cause close to my heart,” says Hannah Walker.