An e-mechanical took out stage 1 runner-up Pier-André Coté early on in the men’s race, but stage 3 winner, Matteo Dal-Cin, and Nickolas Zukowsky flew the orange flag admirably, scoring enough points with their fifth and eighth place finishes to lock down second spot in the yellow jersey and team classifications. NTT Pro Cycling was the only WorldTour team to finish ahead of the orange armada. 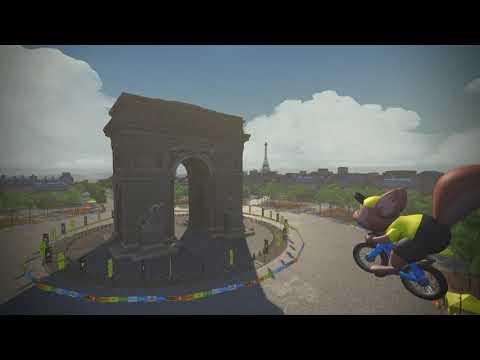 “I’m super happy, I feel like we put our best foot forward and did a really good showing for Rally Cycling against a lot of the world’s top riders. We’re going to start our outdoor season pretty soon, so I’m really excited to get racing outdoors with the team.”

“Finishing on the virtual Champs-Élysées is one of the more unique experiences we’ve had as a team, and we were thrilled to be there. We lost Pier-André Coté, perhaps the pre-race favorite, to a computer malfunction right at the start, but luckily our two other Zwift stars, Matteo and Nick, did an excellent job.”

“The Virtual Tour de France was a great experience for our team. Of course, we hope to compete in the real Tour de France at some point in the near future, but we would happily line up again for a virtual one. I definitely want to thank all of our team’s efforts to get everyone up and running on the platform, and for the exceptional assistance we had from Holden Comeau, Matt Gardiner, and their team to speed up the Zwift learning process.”

In the women’s race, Krista Doebel-Hickok and Megan Jastrab finished in 19th and 21st positions. After hanging in there with the elite selection through all six frenetic laps of the Champs-Élysées circuit, the final acceleration proved to be just a half-kilometer too far.

The front #TDFvirtual group is down to only 25 riders now. @KristabelDH and @JastrabMegan are there. 12 km to go!

Lauren Stephens (TIBCO-SVB) won the stage, capping a dominant display for her team in this inaugural Virtual Tour.

The Rally Cycling Women’s team will be looking to build on their fitness from the Virtual Tour as they prepare the real thing, La Course by Le Tour de France, on August 29.