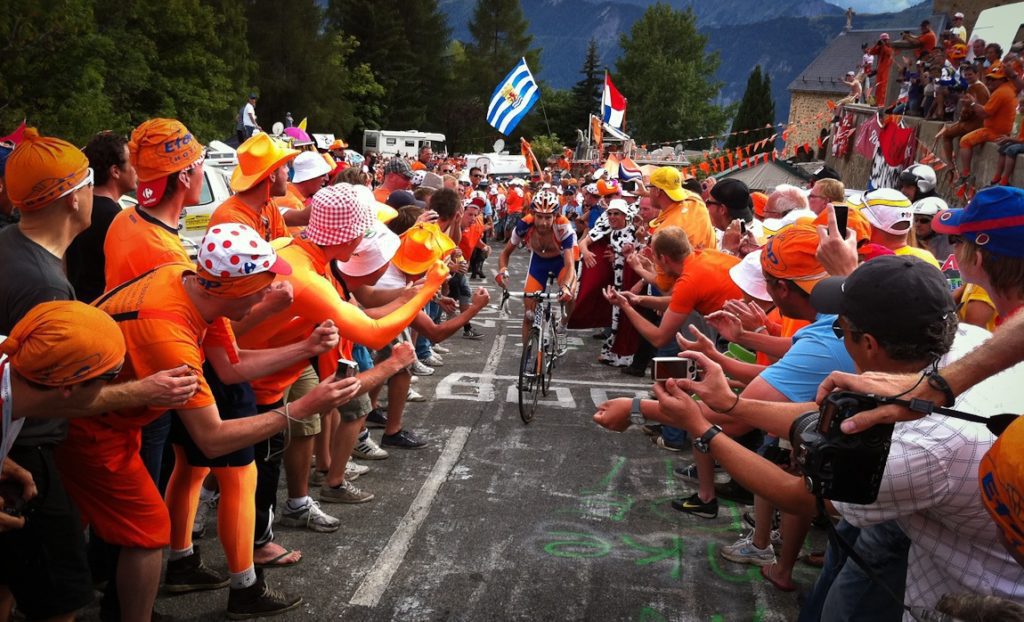 The Netherlands has a rich cycling history with various Grand Tour winners and at home, a cycling infrastructure that is the envy of the rest of the developed world. Yet somehow, a surprising statistic is that the Dutch find themselves not having worn the yellow jersey since the 1989 Prologue stage.

The support on the 7th hairpin, now known as Dutch Corner, on the Alpe d’Huez shows the love that Dutch fans have for the Tour de France. The passion and craziness amongst the sea of orange as the riders climb the iconic climb is testament to this. With the Alpe providing the last meaningful action in this year’s Tour, we can be sure the whole mountain will be a tunnel of fans supporting their favourites.

On the Prologue stage held around Luxembourg in 1989, Erik Breukink beat the challenge of GC contenders Laurent Fignon, Sean Kelly, Greg LeMond, Steve Bauer and Miguel Indurain by between 6 and 10 seconds. Winner of the White Jersey for best youth the previous year, he ultimately withdrew from the race and didn’t reach Paris, but finished on the podium in 1990.The beginnings of the drought

With 11 different Dutch Yellow Jersey wearers in the 80s alone, there was nothing to suspect that a 26 and ongoing year wait was in store for the next one. No Dutch rider has finished on the podium in Paris since Breukink’s 1990 result with the closest being Robert Gesink’s 4th place in 2010. For most of the 1990s and early 2000s, Michael Boogerd became the great Dutch hope, a 5th place in 1998 a sign that, hopefully, he would kick on and potentially end the drought. He then finished a disappointing 56th in the 1999 Tour de France.

Boogerd only ended up with one other top 10 however, a result of 10th in contrasting with a low point of being the highest placed Dutch rider in 74th in 2004 (the worst ever result for Dutch riders). For most of that time, there were still stage wins to fall back on, but even these dried up. After a run of 40 years out of 44 with a stage win, Dutch riders didn’t win a stage between Pieter Weening’s victory Stage 8, 2005 and Lars Boom winning on the cobbles of Stage 5 in 2014.

Not all Dutch Doom and Gloom

The Dutch rider Tom Dumoulin had a great chance to break the run in this year’s first stage and was the favourite but ended up finishing 4th in Utrecht with Jos van Emden in 5th. With an in-form Dumoulin, future prologue style Stage 1s could see the Dutch run finish.

This far into the 2015 race, it’s no surprise to see the pair of Robert Gesink and Bauke Mollema as the highest rank Dutch riders, but being close to 3 minutes back already it will be a tough ask to haul themselves into Yellow at any stage and so the run should continue into 2016.

The upside to the 2014 race was a double top-ten result with Laurens Ten Dam in 9th and Bauke Mollema in 10th. If these riders and Robert Gesink perform to their potential and attack similar stages to the Mur de Bretagne early on then they may stand a chance of reaching Yellow.

Mike Teunissen won the first stage of the 2019 Tour de France to be the first Dutch rider in yellow since Eric Breukink 30 years before.