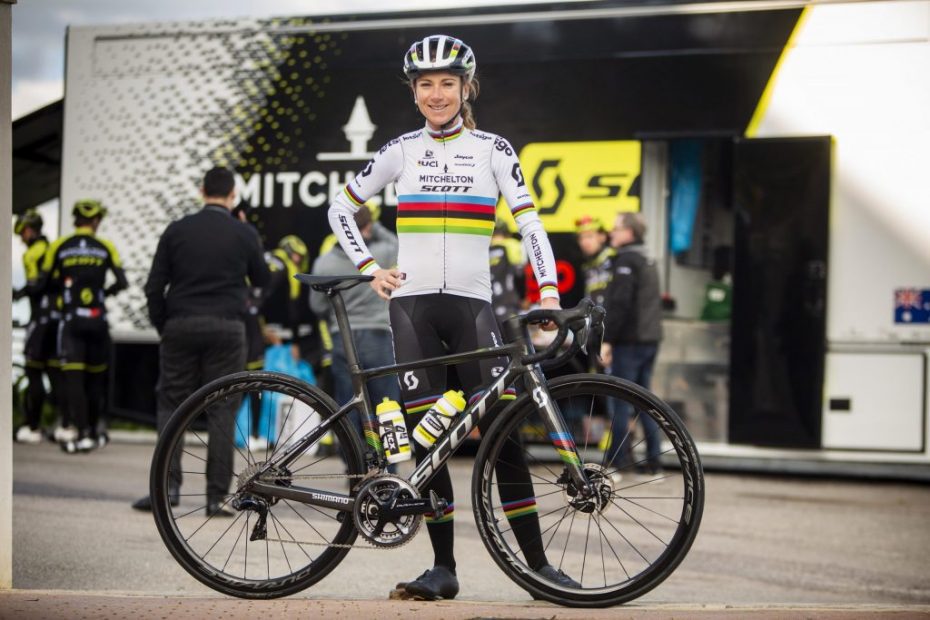 World champion Annemiek van Vleuten returned to racing in style today, claiming victory at Emakumeen Nafarroako Klasiko in what was only her second race of the 2020 season and second solo win in the rainbow jersey.

The race marked an official return to racing for the Mitchelton-SCOTT women’s team following on from almost five months away from racing due to the COVID-19 pandemic.

The 37-year-old cast any doubt in form aside, launching away from Anna van der Breggen (Boels-Dolmans) on the final climb, before catching and passing solo leader Mavi Garcia (Alé-BTC Ljubljana) on the descent to take a magnificent solo victory; a tactic which was become her signature trademark.

With a wide range of teams on the start line, months without racing and hot temperatures, the day was set for a very active race. After 60kilometres and two categorised climbs, a break was yet to form but the pace saw the peloton reduce down to around 30riders.

As reduced front group headed up the six-kilometre, first category climb, Etxauri, the first breakaway of the day formed. A group of four riders managed to escape over the top and establish a solid rhythm, riding out to around a one-minute advantage.

With all eyes on her, Van Vleuten showed everyone she was ready to race, making it into an elite selection on the third climb of the day, that successfully bridged across to the front four riders before another split occurred.

Van Vleuten broke away in what proved to be an important move with five other riders, including her great rival and compatriot Van der Breggen.

Garcia took her chance with just over 20 kilometres to go, jumping away from the leaders with a strong solo attack and quickly establishing a one-minute lead.

However, on the final climb, Zuarrarrate, Garcia’s lead significantly reduced after multiple attacks and counter attacks flew from the strong chasing group. This saw Van der Breggen break away with Van Vleuten close behind on the wheel.

Van Vleuten showed experience and patience, waiting for a good moment and as Van der Breggen slowed, the world champion counter attacked, leaving the Olympic champion in her shadow.

The Mitchelton-SCOTT rider continued to press on, catching and passing the solo leader Garcia after a small rise on the descent, before enjoying a spectacular solo victory.

“I am super happy to begin like this. It is a dream second start to the season, it’s my second race so I have won two out of two races, it can’t be better. To win solo is awesome too, I could really enjoy the last 500metres.

“I was a little bit nervous coming from altitude just two days ago so I didn’t know how I would feel but I love to race in Northern Spain so that’s also why I came here and it was great to test the legs after an altitude block.

“At the start I didn’t have any expectation to win to be honest, because Lucy (Kennedy) and Amanda (Spratt) were actually the leaders today. Just the girls weren’t really on an awesome day, so they dropped on the third climb and I came there with a small group on the top of that climb.

“I am of course happy I won but I am really very happy because I also raced tactically smart. On the final descent with five kilometres to go there was a small 300metre uphill and I had that really in my mind. We did a recon and I knew it was a good opportunity. I caught Mavi (Garcia) by surprise because I was very prepared for it and then I held on for the final four kilometres to the finish.

“I am very happy with the day and also I want to give a shout out to the organisation with how they organised it, how they kept it safe and made sure everyone was tested here, they were very serious.”