What happened to… Jacky Durand 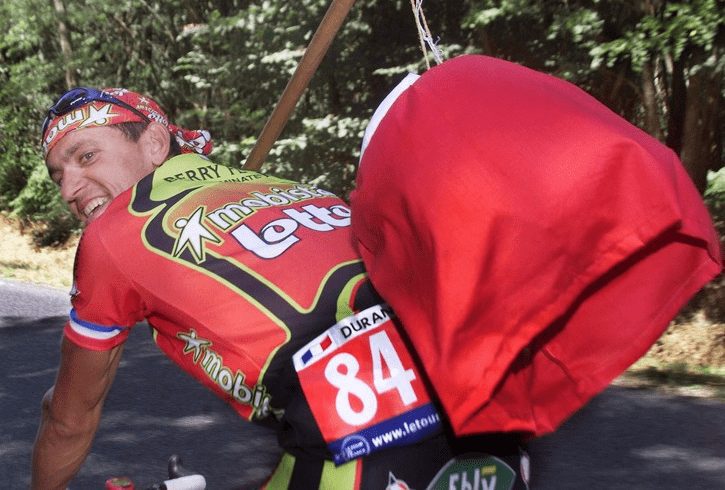 My first recollection I have of Jacky Durand is of him riding what was presumably the last stage of the 1999 Tour de France. I must have seen him in plenty of breakaways during that Tour but it’s this one image that has stuck in my mind.

As the confirmed Lanterne Rouge of that Tour, he had been given a red fabric lantern on a stick to ride with. A similar sort of look to an old-fashioned tramp’s knapsack. This was given to him as the rider finishing absolutely last in that year’s Tour de France. The lanterne rouge is a nod to the red light traditionally found on the rearmost train carriage.

Despite this celebration in being last, revelling good-naturedly in the mediocrity, it ignores the fact Durand was actually a decent rider. He remains the only rider to finish last and win the overall combativity prize in the Tour de France. Recognition of his attempts to light up the French race that year.

Durand was not a successful youth rider in terms of wins, which he himself put down to not being a sprinter nor a climber. He did, however, win the amateur team time trial championship in 1988 and became a stagiaire at Systeme U in 1989. He was signed full-time at Castorama in 1990 and had some encouraging results including stage top-10s at the 4 Days of Dunkerque and Circuit de la Sarthe. 1991 saw a first Grand Tour ridden – the Giro – where Durand finished 90th and 3rd on Stage 12. He took his first pro win too in the GP d’Isbergues.

1992 changed everything though. Durand became the first French winner of the Tour of Flanders since Jean Forestier in 1956 – 36 years before. It was also the first breakaway to have ever succeeded in that race. Attacking after 45km, Durand stayed away for the remaining 212km. The break also contained Hervé Meyvisch, Patrick Roelandt and Thomas Wegmüller.

round 70km later, they’d gained a huge lead of 24 minutes. Eventually, just Wegmüller and Durand remained. Durand attacked on the Bosberg, the final climb, and held the lead to the finish line. The first riders of the peloton to finish came in 1 minute and 44 seconds behind Durand. It’s just a shame the Castorama dungarees jersey ruins the finish photos so much!

With a surprise monument victory secured early on in his career, you’d think that the peloton would’ve marked Durand’s breakaways in the future. He won the French National Championships in 1993 with another long breakaway. Encouraged by his team manager who didn’t want to see teammate Luc Leblanc win that year. A sprint win in the Critérium Dauphiné that year was also a decent victory.

A repeat national champion victory in 1994 saw him keep the tricolour jersey for another year. Jacky Durand also scored his first Tour de France stage win. Unsurprisingly, it came from a breakaway. He finished 1 minute 55 seconds ahead of the peloton but also 55 seconds ahead of his breakaway companions after striking it out alone.

The 1995 Tour de France saw Durand win the prologue after pre-race favourite Chris Boardman crashed out. A quiet 1996 and 1997 followed before returning to the limelight in 1998. Another successful breakaway on Stage 8 of the Tour de France saw Durand outsprint 5 other riders for the stage win. That year he also won a stage in the Tour of Poland and the then, quite prestigious, Paris-Tours.

By 1999, we’ve come full circle to the introduction paragraph. No stage wins in that Tour de France but plenty of recognition for his quality as a rider. He did win a stage of Paris Nice that year, finishing 38 seconds ahead of the chasing pack. There was also a first, but unsuccessful, stab at the Vuelta too.

2000 saw near misses, with 2nd at the National Championships, 3rd on a Tour de France stage but the modus operandi stayed the same. Get into breakaways and see what happens. 2001 saw one of the last of Durand’s big wins in the partially off-road Tro Bro Léon. A race where the winner famously gets gifted a baby pig. Another Critérium Dauphiné stage was won in 2002. However, Durand was disqualified from that year’s Tour de France for holding onto a team car whilst in the mountains.

2003 and 2004 saw little results of note and Durand retired heading into 2005 after receiving no offers from teams.

The year Durand retired, he was offered the opportunity to represent French supermarket chain Champion in their sponsorship of the 2005 Tour de France. At that time Champion sponsored the King of the Mountains jersey.

Like Richard Virenque, Jacky Durand moved into commentary for Eurosport. Durand has headlined the French coverage of the Tour de France in recent years. He received the French Commentator of the Year award in 2019 in recognition of his work. When Durand’s not working, he lives in Mauritius these days.

2013 saw a list of re-tested samples from the 1998 Tour de France made public. Jacky Durand’s name was on the list of positives, including names like Erik Zabel, Mario Cipollini, Jan Ullrich, Abraham Olano and Laurent Jalabert. At the time Durand said the following:

“At the time we the riders could hear the alarm bells sounding. We all agreed that our samples could be retained for a time when there was enhanced research regarding the detection of EPO.

In the late 90s the peloton was a shooting gallery. Everybody was doping and nobody knew how to get out.