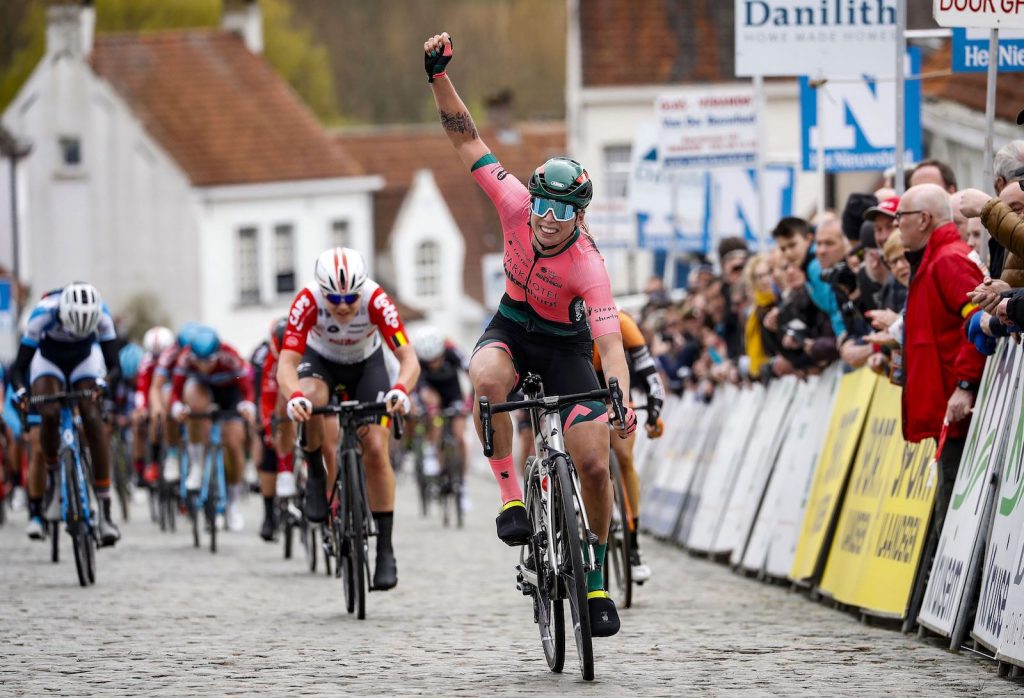 Nokere Koerse is still a fairly new race on the women’s calendar. The first edition took place in 2019 and saw Lorena Wiebes power up the Nokereberg to take the overall win. Canyon SRAM’s Lisa Klein and Lotto Soudal’s Lotte Kopecky joined Wiebes on the podium. 2020’s race was cancelled amid the COVID pandemic but the race returned in 2021. Amy Pieters took the win last year ahead of her breakaway companions Grace Brown and Lisa Klein.

There are 8 sections of cobbles, although mostly quite short sections. The one exception is the 1,600m long Huisepontweg with its distinctive windmill. The cobbles aren’t horrible here though and the riders come at it from the side ending with a downhill. The climbs of note are the Lange Ast, 400m at 5.2% and the Nokereberg itself, 350m at 5.7%. We’ve had two different outcomes in the two editions so far. If the teams get their act together, the odds are we see another decent-sized bunch sprint in 2022’s Women’s Nokere Koerse.

A new development for 2022 is that Nokere Koerse will have equal prize money for men and women. That makes it the highest-paid one-day race in the 2022 women’s calendar. There will also be live tv coverage for the first time. Last year we had highlights and some live broadcasts on twitter from Kyosuke Takei – live coverage will be a big step forward.

The weather looks kind on Wednesday – little wind, although the gusts will still feel strong and a dry race is forecast. With that in mind, it feels like we shall see the sprinters take Nokere Koerse this year. 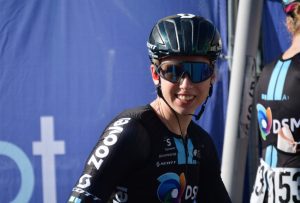 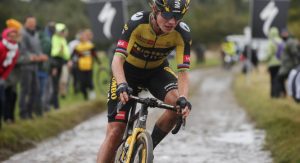 It’s going to be tough to not call Lorena Wiebes as the favourite here. The 2019 Nokere Koerse winner is on a streak of 2 victories in a row now. Winning at Ronde van Drenthe after winning at GP Oetingen shows Wiebes is back to some of her best form after a quiet week in Spain in February. Her team works flat out for her, with Pfeiffer Georgi becoming a particularly important lieutenant in their group. We saw her make counter-attacks at Drenthe but she will be more often seen neutralising moves.

After winning Strade Bianche, you don’t have to worry about Lotte Kopecky on the climbs at all. She showed that she still has her sprint too, finishing 3rd at Ronde van Drenthe this weekend. Nokere Koerse is a race she’s traditionally done well in too, finishing 3rd and 4th in the two editions. If it comes down to a sprint, we’ll see a solid head to head between Kopecky and Wiebes. SD Worx also has a number of options who are is likely to make an attack. I’m going with Christine Majerus as the most likely to do well here. Majerus won Drentse Acht last Friday and has been 10th and 13th at Nokere Koerse previously.

5th at Ronde van Drenthe was decent for Marta Bastianelli. After taking 3 wins already this season, there were too many pure sprinters left in that bunch and she was out-powered. Her best hopes are for the race to be thinned out a lot so that only a handful of riders are still left to contend the sprint up the Nokereberg.

It’s almost a surprise to see Marianne Vos on the start list here. She’s not done the race before in its short history but that’s because she largely only races the Women’s WorldTour one-day races. We have seen her racing since she won the cyclocross world championships, finishing 7th at Strade Bianche. This race should suit her more with the uphill sprint finish of the Nokereberg reminiscent of many of her victories in recent years.
With no Vos, Jumbo-Visma will be behind Jip van den Bos. She appears to be back to her best after a 2021 season interrupted by the effects of a concussion. It’s hard to believe but finishing 9th at Ronde van Drenthe was her highest finish in a WWT race since the 2016 Tour of Chongming Island. The fewer pure sprinters there are at the end, the better for Van den Bos.

I’m torn between whether this finish suits Chiara Consonni or not. On the one hand, she’s a lighter rider than say Lorena Wiebes, so will have a higher w/kg on the Nokereberg but with the cobbles, the outright power plays a big role as well. She’s had a good March, a pair of 2nds and a pair of 7ths are a good return. Whilst she was 48th here last season, it was whilst working for Elisa Balsamo so that’s not an accurate guide.

Susanne Andersen seems refreshed after moving to Uno-X from Team DSM. We’re seeing her back to her consistent results with a number of top-10s already. She finished in the front group at Ronde van Drenthe but didn’t have much kick left. Her best chance for a high result will be from a whittled down peloton but she’s done well here before, 7th in 2019’s race.

It’s been a bit of a mixed bag for Trek’s Chloe Hosking so far this season. The highs of 2nd place on a Bloeizone Fryslan stage are mixed with having to be the lead out rider for Elisa Balsamo. She was 11th at Ronde van Drenthe in that role, leading out the whole peloton into the final metres. It looks like she has the lead role this time but I worry the uphill finish will suit others more.

Alice Barnes has quietly had a really strong start to the 2022 season. After finishing 33rd at Omloop het Nieuwsblad, Barnes hasn’t finished outside of the top 10. That includes the time trial at Bloeizone Fryslan and the overall GC too. 3rd is her best result so far but this feels like Alice Barnes might’ve kicked on this year. In contrast, Lisa Klein hasn’t had much luck in her racing so far. Aside from 5th at the Bloeizone Fryslan time trial, her best result is 49th. We’ve seen her attacking style of racing but it hasn’t stuck so far. Traditionally, Nokere Koerse is one of her best races though. Klein is the only rider to make the podium in both previous editions. She will definitely be one to watch.

Maria Giulia Confalonieri is another rider who’s been going well recently. Chasing back on after a mechanical at Ronde van Drenthe dulled the sprinting legs and she was 21st. But she was 8th the day before at Drentse Acht and 3rd at GP Oetingen a couple of days before that. She was 7th at last year’s Nokere Koerse and this sort of hard racing, finishing in a sprint suits her.

She hasn’t won a race yet this season but the emerging star is Clara Copponi. Similar to how Emma Norsgaard broke out at the start of 2021, Copponi is very much taking on that role this year. She was 4th at Ronde van Drenthe and hasn’t had a result lower than 6th.
Teammate Grace Brown was 2nd here last year, managing to get into the winning break with Pieters and Klein. We’ve seen her in plenty of attacks already this spring classics season but none have stuck so far. It feels like she’ll have a similar role here, attack, see what happens and then use Copponi in a final sprint.

I said that Arlenis Sierra was going to do her first race for Movistar at Ronde van Drenthe but Movistar ultimately pulled out citing scheduling issues. The team, once again, looks to line up with Arlenis Sierra in their team. There are no indicators of form as we’ve not seen Sierra race since winning Tre Valli Varesine in October 2021. In theory though, this should be a race that suits her talents.
It happened again – no Arlenis Sierra for Movistar

Finally, BikeExchange-Jayco has a number of similar options. There’s Georgia Baker who has been sprinting well, including 7th at GP Oetingen recently. The team does have a couple of other options too in Nina Kessler, who was 6th at Ronde van Drenthe in one of her favourite races. Plus Arianna Fidanza who was 5th at GP Oetingen as well. Ruby Roseman-Gannon is expected to miss out at Nokere Koerse after having an illness.

The Dutch pair racing for Le Col-Wahoo have been strong again in the early part of the season. Marjolein van ‘t Geloof was 6th at Le Samyn but has also been seen doing lead outs for her teammate, particularly at Bloeizone Fryslan. Maike van der Duin used that lead out to finish 4th there and was 6th the next day too. Racing for the mixed Netherlands national team at Drentse Acht, she was the first of the bunch over the line, finishing 5th.

I was impressed with Bingoal Casino’s Minke Bakker in finishing 16th at Vuelta CV Feminas but she’s had a series of DNFs since then. However, racing at Stalhille in the Flanders Ladies Trophy this weekend, Bakker took the victory.

Abi Smith got off to a great start as a stagiaire for TIBCO last season, regularly finishing in the top-20. With Lauren Stephens not in the best form, it opens up opportunities for others to get results. Abi Smith is a rider to continually watch out for in 2022 and this is the first race that might suit her.

The last rider to watch for is Katrijn de Clercq who sprinted to 5th in the final stage of the Bloeizone Fryslan. She was originally down to ride Ronde van Drenthe but didn’t end up on the final start list. That remains her stand-out result but marks Katrijn out as a rider with the potential to watch.