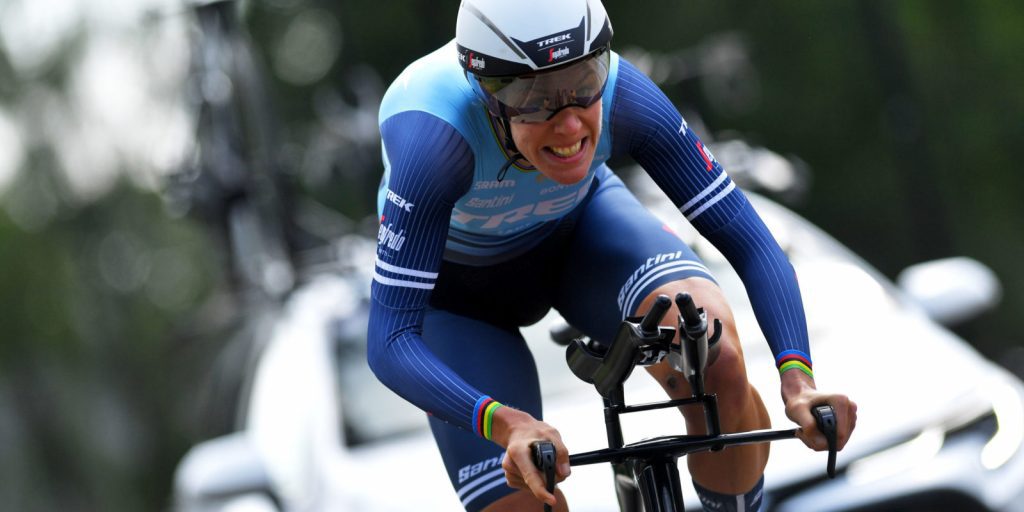 The 2021 Women’s World Championship Time Trial takes place between Knokke-Heist and Bruges. The seaside town location of Knokke-Heist will give us a fairly flat time trial after a couple of recent hilly editions. Even the hill that appears to be after Oostkerke on the profile map below is minor. A quick look on StreetView and I can’t even find anything of note there! The polders in that part of Flanders will allow the wind to become a major factor. With large open spaces and few natural wind blocks, with an unhelpful wind direction different riders will become affected in different ways. The long-range forecast suggests it’ll be a fairly solid (15kph) wind from the SE – which is a head/crosswind for most of the course.

The recent European Championships have given us a practice run as to which riders are in the best form on the time trial bikes. The profile there was fairly similar to this race in that it was predominantly flat. Many of the earlier time trials in the 2021 season have been mountain TTs or very up and down like the Olympics TT. The flat time trial in the Healthy Ageing Tour was too windy for time trial bikes and a roadman’s TT can produce different results – plus it was almost 6 months ago! A few of the major favourites weren’t at the European Championships but it gives us a great picture for who will do well here.

Marlen Reusser is looking like the big favourite after proving to be in great form at the Ceratizit Challenge and carrying that into the European Championships. She had a comfortable gap in the end against the clock over Van Dijk, slightly aided by catching her minute riders ahead of her. With a flat TT, Reusser should have an advantage over some of the lighter riders like Van Vleuten.

I think Ellen van Dijk is the best Dutch option on this course. She finished 2nd at the European Championships and this will be her sole personal goal at this year’s World Championships. The quotas at the Olympics meant that she didn’t get to race there at all, so this is the year’s A race. Van Dijk has more outright power on the flat than her Dutch teammates that will help her out. She has a great chance of winning too, although I think Reusser will be too strong.

The Olympic champion, Annemiek van Vleuten, will always be in the mix. I think that this route is too flat for her to win it though this year. She’s excelled previously at rolling time trials, as seen by her gold medal in Tokyo. Van Vleuten may be able to get close to Van Dijk’s time but I think she’s racing for the final spot on the podium.

It feels strange predicting that Anna van der Breggen won’t finish on the podium after she comfortably won last year’s World Championship time trial. However there are question marks heading into the penultimate race of her well-decorated career. She was definitely not at her best at the Ceratizit Challenge and bloodwork after that race has failed to highlight any issues. I’m hoping we don’t see her career finish with disappointment, so will be crossing fingers she’s back to her best.
No Van der Breggen now as she looks to finish off her career in the road race. She’s also not in her best form and is struggling to understand why medically.

The 2016 World Champion Amber Neben continues to defy expectations at 46 years old. She was 5th at the Tokyo Olympics, just 17 seconds away from the silver medal. That’s spurred her on, knowing that she’s not far away from the top reaches of the time trial results. I get the impression that if Amber feels like she’s going to just be making up the numbers, that will be when she stops racing. That doesn’t look like it will be soon though!
Since this article was published, there has been news that Neben crashed recently and sustained a hip fracture. She still intends to race but there could very well a knock-on effect.