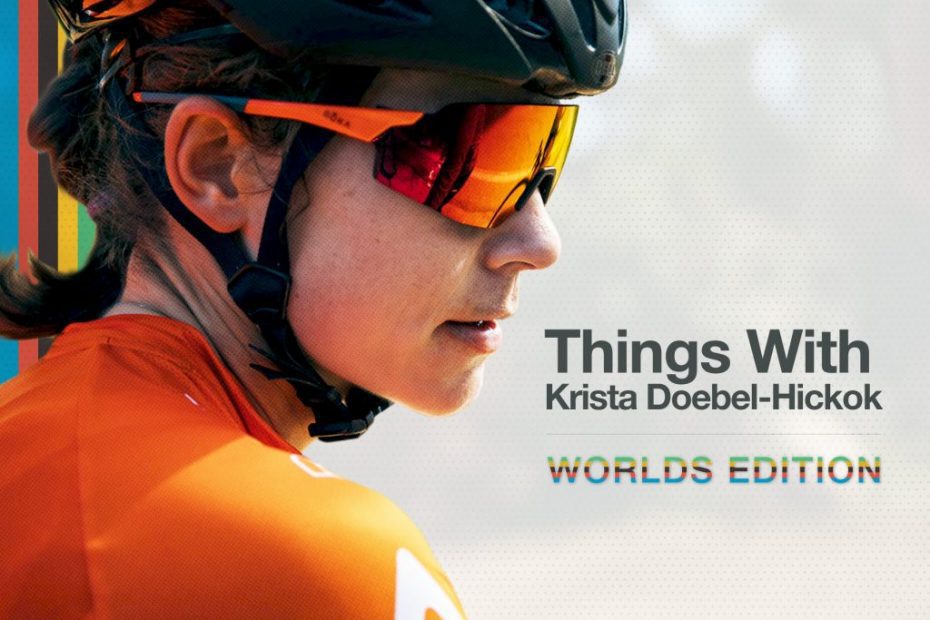 This weekend she’ll swap the orange of Rally Cycling for the red, white, and blue of Team USA as she represents her country at the World Championships. We caught up with Krista Doebel-Hickok about her feelings headed into her first Worlds, plus her switch from long-distance running to the bike, and some of the key moments in her career so far.

In my mind racing Worlds is like this magical experience. The reality is it’s probably just a brutally hard, high-caliber race!

I’ve never raced in a Team USA kit before. That’s crazy, given I’m on the Olympic longlist for the road race, but I guess I have done some Zwift events under the Team USA banner. Part of the reason is I’ve always been on trade teams since I turned professional in May 2013. I’ve been really well supported by my coach and didn’t need that alternative development path.

I started riding a bike when I graduated from college. That was December 2011 and I turned professional in May 2013. I really hadn’t been in it that long when I was first asked about Worlds. I didn’t really know what it was – had certainly never sent in a petition to be considered for selection. I wasn’t watching every professional race at that time, I was still learning how to ride a real bike, how to clip in!

What it takes to be a great cyclist is the golden question. You have to have the physiology and the willpower and determination to hone your talent. You have to be able to suffer, for sure, I think all cyclists would agree on that. But you also have to be able to get the best out of yourself as a person. If you’re totally screwed up off the bike you’re not gonna perform your best on the bike.

My preparation for Worlds could have been worse. I look back at other years and I have had way more trying seasons, with ups and downs, horrible crashes, and teams that stopped racing me when I had peak fitness. This year, sure, we’ve had to adapt a lot, but we’ve always had opportunities. There was virtual racing as soon as we stopped racing outside. I’ve set all my best power records this year. Best five-minute, best 20-minute. I feel like that’s a good sign going into the World Championships.

I like this Worlds course. It’s really hard. 2,800m of climbing but no really long climbs. It suits riders that are more punchy so I’ll be doing whatever I can to help my teammates at the race. I know that races of attrition are what suit me well.

I started running in middle school. My brother was on the track team and I just fell into it naturally. People noticed my talent and took me under their wing. I didn’t much like training in High School, I wasn’t interested in a career in running. That came later.

I got my first injury in my final year of middle school. I was getting stress fractures from running just one mile a week and nobody believed that was even possible. So I was pulling up in races and grabbing my legs, saying I was in pain, and people were like ‘oh she’s just losing for the first time and she’s upset’. Nobody really took it seriously, but then I had bone scans and it showed stress fractures in both legs.

In my senior year of high school, I ran outstandingly well. I did enough to win a full scholarship at Vanderbilt. When I joined they were dead last in the SEC and by the time I left they won the SEC Championships in cross country. It was a pretty special program to be a part of.

By the end of college, I couldn’t run a mile. My injuries were so bad, and I was pretty burnt out with the sport. I decided to take two weeks to just ride my bike at home. It snowballed from there. I met some cyclists who said ‘you could be really good at this, have you considered racing?’

I did my first race two months later. Not long after, I knew this was something I wanted to go for. I wasn’t sure what my plan was but I remembered one of my riding partners asking ‘would you consider going professional’? In 2013 Linda Jackson from Tibco offered me a place on her team. I told her I wasn’t ready yet, but after some thought, I took up the offer. I needed a lot of help at that point, I was really green! I’m still really grateful to them for giving me an opportunity.

You find some really good people with good hearts in this sport. I admire people and cyclists more for that than for their results. I admire someone like Amber Neben for being a good, genuine person.

In cycling, you can have really high highs and really low lows. All in the same season, even the same stage race. I guess I like the emotional aspect, seeing what I can handle, how I can get better as a person and a rider. That’s a never-ending life ambition.