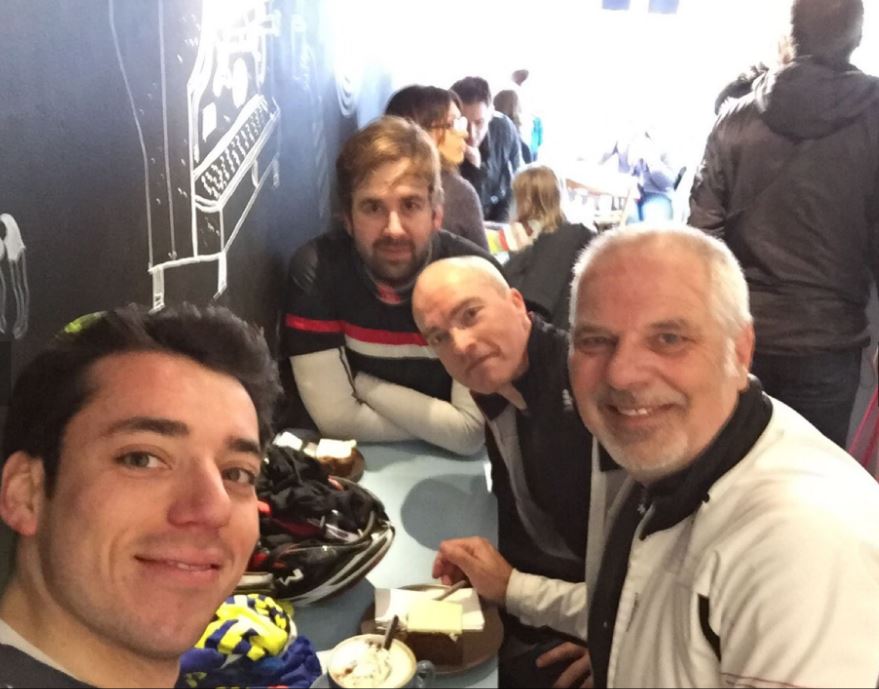 Every cyclist has that pre-ride routine and their favourite kits. There aren’t many club cyclists not on Strava these days either, just some of the old stalwarts. Find out the other things road cyclists can’t live without.

It’s the lifeblood of cycling. Rides either start from coffee shops or find a way to visit one. It’s partly because it’s social but also because it just pairs so well with cake too! There are physiological reasons for it as well, the caffeine in the coffee helps your cycling. Studies have shown that caffeine alters a rider’s perception of effort. A great thing to have at the start of a ride.

Because of the amount of coffee cyclists drink, they often are super particular about how they like it. Splashing out on fancy coffee machines at home. Lex Albrecht is a pro that’s devoted a lot of time to coffee on her blog.

You still hear the line, even if Ned Boulting showed his own disgust for it in his stage show. If it’s not on Strava, it didn’t happen. No matter what time you thought you got on a climb, the Strava time is gospel. Everyone approaches the app differently, something I covered previously in my Strava personalities post.

It’s also fun comparing yourself to pros too, particularly when the Womens Tour or Tour of Britain have been through your area a few times. A KoM is still a big deal, even if most need some awesome tailwinds to see you top the standings.

I have some very well-travelled gels. I’ll always take an emergency gel out with me but often I’ll not have one during a ride. The important coffee and cake stop gets me through 100km, provided I made sure to eat breakfast. Most taste pretty awful, with some exceptions, so it’s a wonder we bother with them. They do serve their purpose though. When you’re flagging on a ride they provide a boost.

There’s a technique though, opening one whilst riding without splooging it on yourself is an art. Some are more difficult than others to open, even whilst riding with no hands. Just remember not to chuck that gel wrapper in the hedge.

I remember back in the day having a cheap cycling computer that used a magnet to work out your speed and distance. Nowadays no serious cyclist would be seen with such a thing. Garmin used to be synonymous with a GPS unit but the general shoddiness of their x20 series has meant that a Wahoo is favoured by many now. Luckily there’s now a x30 series out.

Similar to Apple vs Android, everyone’s deeply wedded to their buying decisions. People with a Wahoo swear by them, whereas people with a Garmin defend them strongly. One of the features I have on my Garmin doesn’t appear to be available on a Wahoo, so guess where I stand on the debate!

For some non-cyclists, the word lycra gets used in many insults about us riders. But we know better, having a t-shirt flapping in the wind would slow us down. Even a short commute is better in lycra. It’s a surprisingly versatile material too. Judging by some of the wackier designs possible on lycra jerseys compared to the old days of using wool.

Not that wool is completely out. Merino wool makes excellent base layers for instance. But with regards to a jersey, having something figure hugging that stays in place is perfect. Although when it comes to the shorts, it’s borderline just a case of showing off those well-earned leg bulges.

I’ve covered chamois cream fairly extensively in a separate post. But that tingle when you’ve smothered too much on is certainly an experience you don’t forget. It’s an underrated part of pre-ride preparation. On a shorter ride, you can get away without it but a longer one can be torturous without some cream on. Anything to avoid the dreaded saddle sores!