There’s no rest for the weary and the women of Rally Cycling know that better than most. Days after competing in the biggest one-day race of the year, La Course by Le Tour de France, the squad traveled to the Ardèche region of southeast France to take on the Tour Cycliste Féminin International de l’Ardèche.

The mountainous seven-stage race, held from September 3-9, is one of the only stage races left on the international women’s calendar in 2020 and has drawn all of the biggest names in the sport, including Rally Cycling’s women’s team.

The Ardèche is famous for its spectacular geography and geology, as well as its prehistoric roots – evidence of human habitation here goes back as far as the Upper Paleolithic era.

Sara Poidevin has enjoyed success at L’Ardèche in the past. The Canadian placed 11th on GC last year and took third on the race’s Mont Ventoux stage in 2018 along with a sixth-place overall.

“This is my fourth time racing Ardèche and it’s one of my favorite events. Each year there’s one thing that’s guaranteed, a full week of good, hard racing!” 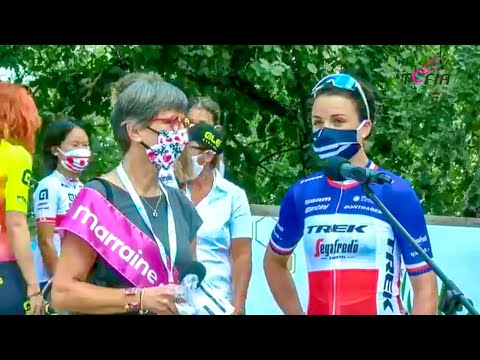 (Poidevin practices her French during the team presentation)

She also explained that L’Ardèche is the only one-week race in Rally Cycling’s women’s program for the rest of 2020.

“This is the longest stage race on our calendar and we’re going to make the most of it. The terrain is always super challenging but we’re fielding a team that’s capable of winning.”

Things start off with a bumpy ride on stage 1, with just a single category 1 climb to contend with before a likely sprint finish in Bourg-Saint-Andéol. Chloe Hosking and Emma White will be working together in the sprints as they look to exchange their orange jerseys for the leader’s jersey.

After one day to find their legs, the peloton goes straight into serious mountains with stage 2 offering up two category 1 climbs and a monster Hors Catégorie (HC) climb to boot. This summit finish will create huge early gaps in the general classification as Krista Doebel-Hickok will join Poidevin in their pursuit of the overall title.

Stage 3 looks at first glance like a pure sprinter’s stage, but with a cat 3 climb just five km from the finish, we might see somebody try to steal the victory. Heidi Franz and Leigh Ann Ganzar are the team’s opportunists and will be looking for their own chances on the intermediate stages.

A second summit finish on stage 4 presents yet another opportunity for the climbers, while stage 5 flips things back to the sprinters with a flat finish in Ruoms. Stage 6 is the longest of the race at 137.9km and will see the GC finally decided, with five categorized climbs and a punchy uphill finale. Stage 7 rounds things out in traditional French stage racing fashion with a closing sprint stage.