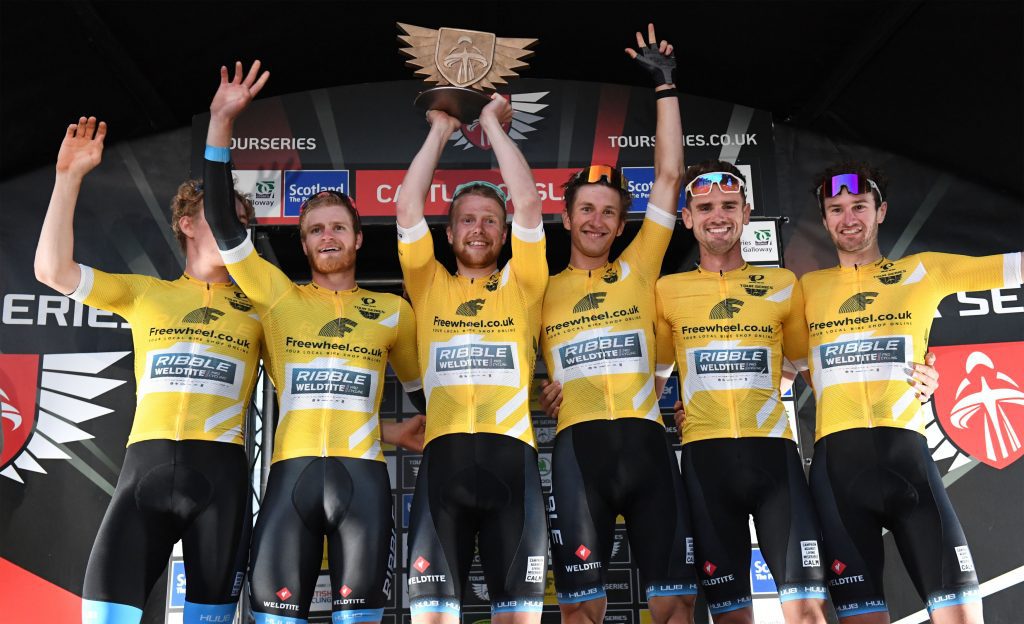 CAMS – Basso and Ribble Weldtite Pro Cycling took the women’s and men’s Tour Series titles at the final round of the 2021 series in Castle Douglas.

Ribble Weldtite Pro Cycling held on to their overall lead despite stiff opposition from defending champions Canyon dhb SunGod, whose dominant performance took them to within one point of retaining their title with the individual race win for Charlie Tanfield as consolation.  The victory was Tanfield’s first since competing at the Tokyo Olympic Games.

Meanwhile 2019 women’s champions CAMS – Basso retained their title, overturning the lead of Pro-Noctis – Redchilli Bikes – Heidi Kjeldsen thanks to a strong performance on the streets of Dumfries & Galloway as Megan Barker took her second individual win of the week.

Jo Tindley (Pro-Noctis – Redchilli Bikes – Heidi Kjeldsen) took second on the night and ensured the runners up spot for her squad, as well as clinching the blue Freewheel.co.uk Sprints jersey.

In the men’s competition it was Guisborough race winner Matt Gibson (Ribble Weldtite Pro Cycling) taking the Sprints jersey, a competition he also won in the 2018 Tour Series.

Gibson’s performance in the Castle Douglas round was key to Ribble Weldtite retaining their Freewheel.co.uk yellow jerseys, with the Warrington-born rider the only member of his five-rider team to make the front group that had been driven away by Canyon dhb SunGod.

Having had their chances of a historic hattrick of Tour Series titles damaged by losing a pair of riders to a crash in Round One in Guisborough, Canyon dhb SunGod knew that they needed to put significant distance and other teams between themselves and Ribble Weldtite on the night.

Full results from the men’s and women’s races in Castle Douglas can be found here.

Highlights of the Castle Douglas races are on ITV4 at 7pm on Friday 13 August with a repeat at 6.55am on Saturday 14 August and available for 30 days via the ITV Hub.