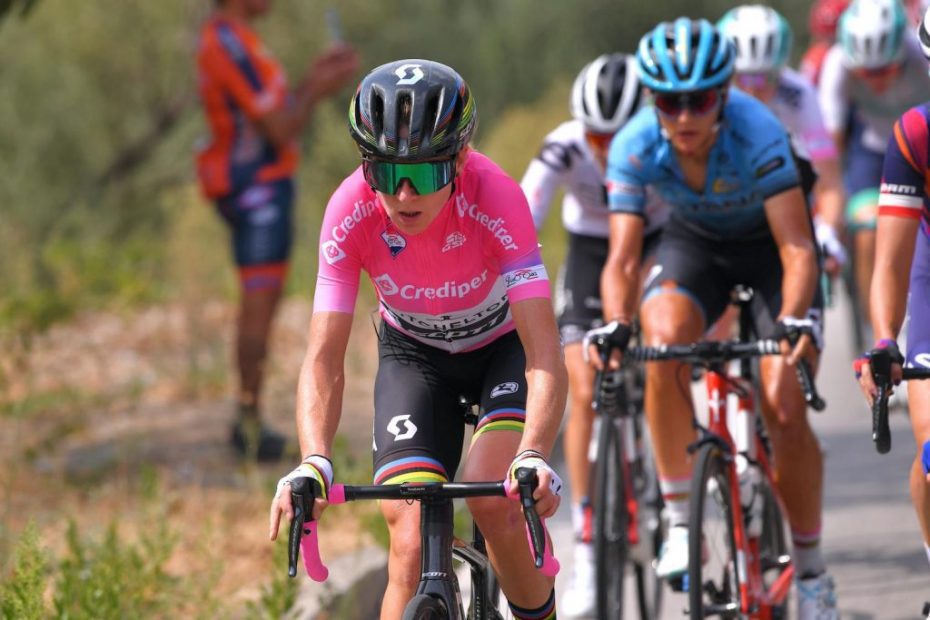 Race leader Annemiek van Vleuten ticked off another day in the maglia rosa as stage six of the Giro Rosa came down to a sprint finish for the second day in-a-row.

The world champion had her Mitchelton-SCOTT teammates for company throughout the day, with the 37-year-old crossing the line safely in the reduced peloton to maintain her lead in the general classification.

Short and Fast
An attacking start to the stage saw a number of riders go clear of the peloton by a handful of second before being reabsorbed by the bunch. It was a rapid first half of the short, 97km route from Torre del Grecco to Nola, and the peloton was strung out over the first climb.

However, it was all back together after the descent as the race then headed towards the next ascent. In a repeat of yesterday’s stage, it was CCC-Liv who drove the pace up the longest climb of the day and just like on stage five, they dropped the pure sprinters in the peloton.

A small rise after the descent then presented an opportunity for attacks and several riders made moves inside the remaining 30km. After numerous failed attempts, a lone attacker eventually managed to get clear, opening up a gap of 30-seconds with 10km to go.

Same Again
There was no chance that the remaining fast finishers in the leading group were going to pass up the opportunity to sprint for the win, and it was all back together in time for another reduced bunch kick.

It was Marianne Vos (CCC-Liv) who backed up her sprint victory from yesterday to claim her third stage of the race. Meanwhile, Van Vleuten was surrounded by her teammates in the finale as they guided the maglia rosa safely through another stage.

Annemiek van Vleuten:
“It was a bit the same today, I was quite happy that CCC were driving on the climbs to drop some of the sprinters and that meant for me it’s more easy and less hectic in the final, because for us the goal was to get myself safe to the finish.

“The key [for the remaining stages] is to stay focussed no matter what, like if it’s a sprint stage, anything can happen. I learned my lesson from four years ago when I lost focus one time with a windy day. So, I will be focussed every day.

“For sure stage eight is the hardest with also a finish uphill, but I look forward to that one. But for the other stages it’s like ‘just stay focussed’, I have to keep a really close eye on Anna van der Breggen and Kasia Niewiadoma especially, and my team is helping so well, Amanda Spratt is always there, so I feel super protected by my team.”